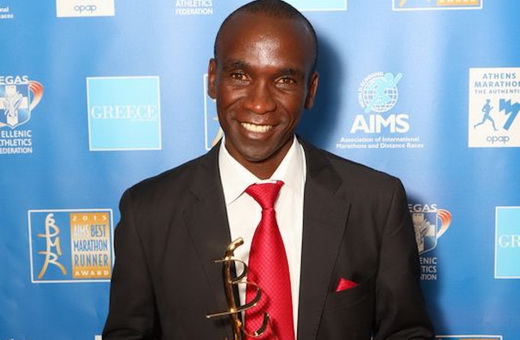 Devotees of distance running and the marathon, in particular, will have much to savour when the 2017 AIMS Best Marathon Runner (BMR) Awards are held in Athens on Friday, November 10. The annual AIMS Gala brings together more than 60 race directors of the Association of International Marathons and Distance Races (AIMS) and for the 11th International Marathon Symposium the following day, November 11. The discussion gives way to competition on Sunday, November 12 with the “Athens Marathon. The Authentic” taking its historic course from the town of Marathon to the 1896 Olympic Stadium in the heart of Athens.

The contest for the men’s 2017 BMR winner pitches the 2016 Olympic champion Eliud Kipchoge against the 2017 World champion Geoffrey Kirui. After winning the Boston Marathon in April, Kirui took the world title in London in August with 2:08:27 and has a best of 2:06:27 from the Amsterdam Marathon in 2016. Eliud Kipchoge is aiming for a hat-trick at the Gala, having won the AIMS Best Marathon Runner Award for the past two years. He chose an unorthodox setting for his first marathon of 2017, the Formula One circuit at Monza in Italy in early May. He led the mission to make marathon history and break two hours, going desperately close with 2:00:25. Returning to standard competitive conditions, Kipchoge ran the fastest time in the world this year of 2:03:32 for his second Berlin title at the end of September. Including Monza, he has won all but one of his ten marathons.

In parallel to Kenya’s Geoffrey Kirui, Bahrain’s Rose Chelimo won the World Championship Marathon in London in August. Earlier in 2017 she finished second in Boston with a personal best of 2:22:51. Chelimo produced solid form to finish eighth in the 2016 Olympic Marathon in Rio. Mary Keitany also flourished in late 2016, winning her third consecutive New York-Marathon in November before breaking the women’s-only world record with 2:17:01 to win the London Marathon in April. Although outside the time frame for the annual awards, Keitany finished second in New York last Sunday, November 5.

Rosa Mota is the 2017 winner of the AIMS Lifetime Achievement Award. The Portuguese was one of the standard bearers for women’s running in the 1980s and not only because she won the first ever official Women’s Marathon during the 1982 European Championships in Athens, held on the authentic, classic course. Mota followed her initial triumph in Athens with two further European Marathon titles in 1986 and 1990. In 1987 she won the world title in Rome followed by Olympic gold in Seoul the next year. Still the national record holder with 2:23:29 for third place in Chicago in 1985, Mota was one of those who showed that women should be able to run at whatever level and not left on the sidelines.

Two more awards for 2017 will be presented at Friday’s reception, organized by AIMS and the Hellenic Athletics Federation (SEGAS): the AIMS Green Award goes to the Sanlam Cape Town Marathon and the Maraton de las Flores Medellin in Colombia will receive the AIMS Social Award.

On Saturday, November 11, 65 race directors representing 40 countries and some of the world’s best distance races will take part in the 11th AIMS Marathon Symposium. This year’s theme in Athens will be: “Developing your race through the development of the running market in your region” and speakers will include the AIMS president Paco Borao and the Athens Marathon General Manager Makis Asimakopoulos.