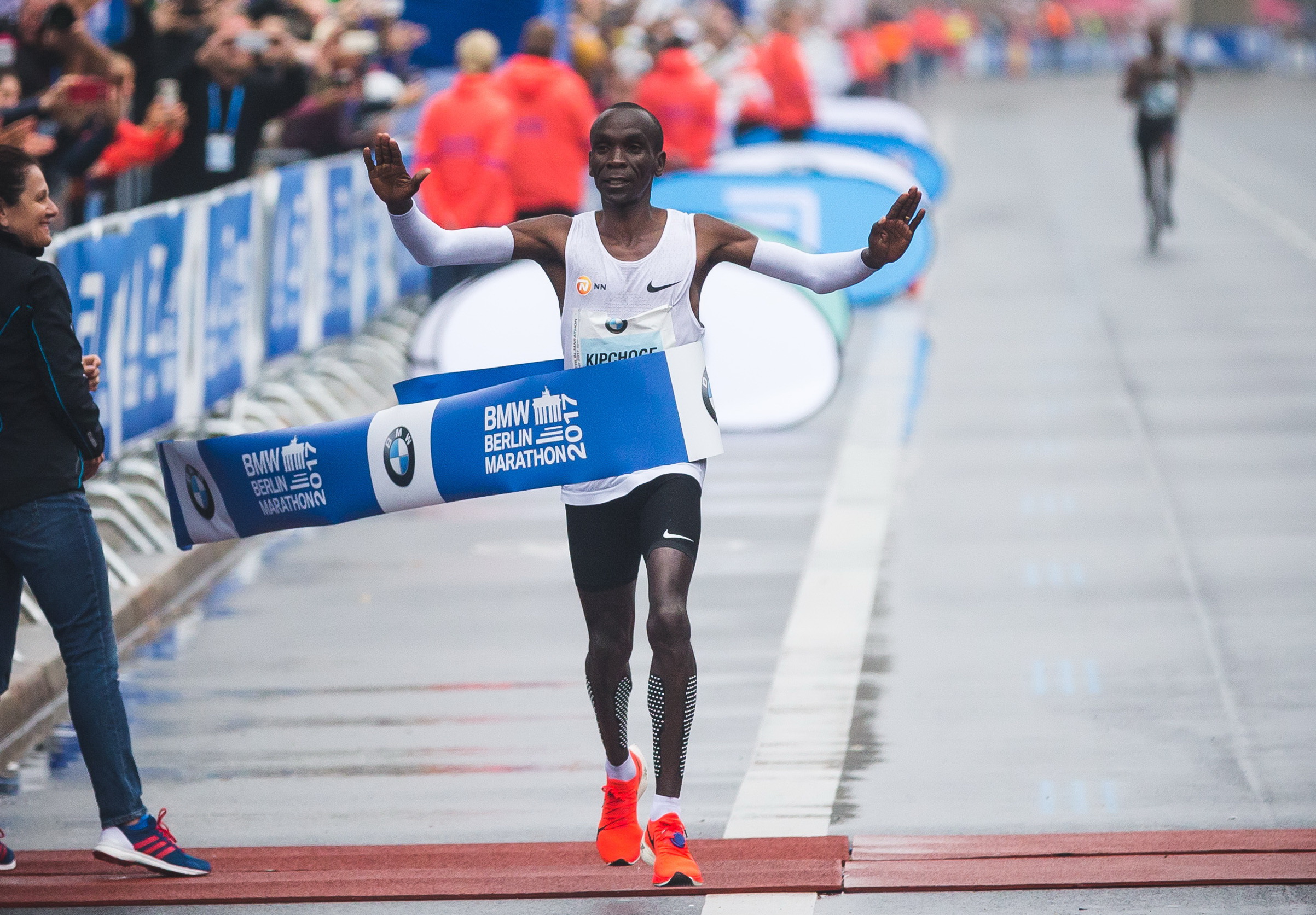 The BMW Berlin Marathon is to the global athletics community what the Super Bowl is to National Football League fans. Fans and athletes scattered around the world get up in the middle of the night to livestream the event. World records have been run on the course and 10 of the 18 fastest male performances all-time have happened there. Berlin is now hallowed ground.

Before Sunday, Berlin was home to the latest world record by Kenyan Dennis Kimetto at 2:02:57 from the 2014 running. It is where The Emperor, Ethiopia’s Haile Gebrselassie ran the first sub-2:04 marathon in 2008, a performance that sort of opened the floodgates to faster performances, a little like the first sub-four-minute mile by Roger Bannister. It was a much-ballyhooed performance when it happened, as was Kimetto’s.

Excluding Boston Marathon performances – which are not counted as official by the International Association of Athletics Federations (IAAF) – entering the 2018 edition, Berlin was home to six of the six-fastest men’s performances in history.

On Sunday, the event once again delivered in spades and is now home to the top seven fastest times – with a previously inconceivable 2:01:39 performance.

Kenya’s Eliud Kipchoge, often referenced as the greatest marathon runner in the world, without actually having the official world record, was set to toe-the-line versus countryman Wilson Kipsang, the apparent next “best” marathon runner in the world. Kipsang has run sub-2:04 four times and was the previous world record holder to Kimetto at 2:03:23 from 2013. In 2016, he ran the course yet another 10 seconds faster. He twice won the London (2012 and 2014) marathon and won New York and Tokyo.

Kipchoge was all but knighted by the global running community and hailed by the New York Times in a glowing piece about his monk-like existence, humility, and quotable Aristotle-like philosophy. Kipchoge ran a 2:00:25 during the Nike-arranged spectacle in 2017 called “Breaking-2” event that took place on the Formula One Autodromo Nazionale Monza race track in Monza, Italy. The event was not supported as a record by the IAAF for various reasons but was a demonstration of greatness and certainly a test to capture a Bannister-like lightning-in-a-bottle moment. It held the world’s attention for a minute without much – for once – talk of drugs.

Kipchoge won the 2016 Rio Olympics gold medal in the marathon and has won gold in IAAF world track and field and cross country championships. He has won seven consecutive gold label IAAF marathons. Kipchoge is perhaps the new emperor or king as one Let’s Run forum contributor called him.

Sunday, he smashed the world record with that 2:01:39 performance. At the top of the world, a minute is forever and that 1:18 improvement, like Kimetto’s 2:02:57 and Gebrselassie’s 2:03:59 looks unbeatable. So goes the theory of diminishing returns; Kipchoge’s performance was a giant leap for marathon runners, not unlike Paula Radcliffe’s 2:15:25 from 2003. It was a thing of beauty and greatness and is the largest improvement on the world record in 51 years. The last time that the improvement was greater was back in 1967 when Australia’s Derek Clayton improved it by 2:37 in Fukuoka.

Kipchoge told the IAAF, “I lack the words to describe how I feel. It was really hard [during the last 17 kilometres] but I was truly prepared to run my own race. I had to focus on the work I had put in in Kenya and that is what helped push me. It was my aim to smash the world record and I felt confident before the race. I’ve now run 2:04, 2:03 and now 2:01. Who knows what the future will bring? I’m grateful to my coaching team, my management, the organisation. I’ll definitely return to Berlin. Berlin for me is eternal.”

And currently, Kipchoge is the king of the marathon. His performance is suggested to be too good to be bettered anytime soon, but is it? Will it, like Bannister’s sub-four-minute mile, open the floodgates?

It is the 11th world record to be set on the Berlin course.

Kenya’s Gladys Cherono broke the course record to run 2:18:11, which is a personal best and the fastest women’s time in the world this year. This was her third win in Berlin and is now the fourth-fastest woman, all-time. In the race, three women broke 2:19 as Ruti Aga finished second in 2:18:34 and fellow Ethiopian Tirunesh Dibaba took third in 2:18:55. Dibaba was a pre-race favourite.

Kipchoge negative split the race with a second-half 60:33.

A total of 44,389 runners from 133 countries improved on the previous registration numbers with 40,775 finishing.