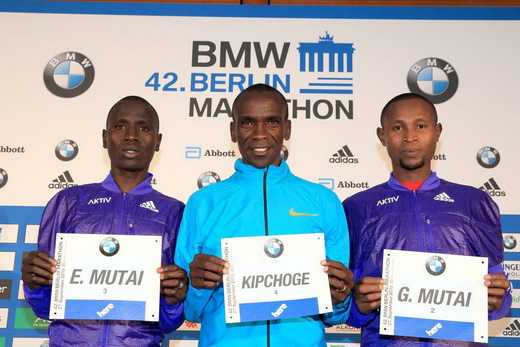 The 42nd edition of the BMW BERLIN-MARATHON promises to be a hunt for superfast times and Olympic qualifying performances when the starting gun is fired at 9 o’clock on Sunday morning to set 41,224 runners from 131 countries in motion along the Avenue of June 17. The Kenyan trio of Eliud Kipchoge, Emmanuel Mutai and Geoffrey Mutai have the kind of split times in their sights which could bring them in range of the world record of 2:02:57 set by their compatriot Dennis Kimetto last year. All have solid experience of the Berlin course which adds credibility to their confidence at Friday’s press conference.

The BMW-BERLIN MARATHON is the first autumn race in the Abbott World Marathon Majors (WMM) series which also comprises Tokyo, Boston, London, Chicago and New York. The race has Gold Label status, the highest category awarded by the IAAF.

Eliud Kipchoge is no stranger to the BMW BERLIN-MARATHON. Two years ago the Kenyan ran his second marathon in Berlin and finished runner-up in the world class time of 2:04:05 which remains his personal best. The only man ahead of him was his compatriot Wilson Kipsang who broke the world record with 2:03:23. Although Kipchoge was overshadowed that day by Kipsang’s performance, he was delighted with his performance: “I know that I can run faster in the future. The Berlin course is very good.”

The time is ripe for Kipchoge to improve on that personal best. “I’m not saying I’ll break the world record on Sunday, but I’m ready for a very fast time,” said the 30-year-old, who has won all his three marathons since the 2013 BMW BERLIN-MARATHON: Rotterdam and Chicago in 2014 and London this spring. Eliud Kipchoge is currently the world number one in the marathon and on Sunday he plans to go through halfway in 61:30 which would be world record schedule. Kipchoge himself is the fastest marathoner in the world this year with his 2:04:42 from London on April 26.

One of his main rivals is likely to be his training partner Emmanuel Mutai. His fellow Kenyan finished second in the BMW BERLIN-MARATHON last year in 2:03:13, faster even than Kipchoge’s time of 2013. “I’m looking forward to the race on Sunday and have prepared very well. It’s always my aim to run faster than before,” said the 30-year-old Emmanuel Mutai. “Everyone wants to win and I accept whatever happens – whether it’s myself, Eliud or Geoffrey who finishes first.”

Geoffrey Mutai is another fine Kenyan runner who is making a return to the BMW BERLIN-MARATHON. The 33-year-old won the race in 2012 after finishing second two years previously. Mutai is the second fastest marathon runner in history with his time of 2:03:02 in Boston in 2011. He is also the New York course record holder with 2:05:06, which he ran later in the same year. For the past two years Geoffrey Mutai has suffered a variety of injuries which have prevented him producing his best performances. “This wasn’t an easy time for me but now I am delighted to be in Berlin and have a good feeling about the race,” said Mutai, who now says the injuries are behind him.

While the leading men will be chasing the top prize and world class times on Sunday, a trio of German runners have a different aim in view: the German qualifying standard in the marathon for next year’s Olympics in Rio. Julian Flügel, Philipp Pflieger and Falk Cierpinski will be setting their sights on finishing under 2:12:15. One name missing from that hunt will be André Pollmächer, who was eighth in the European Championship marathon last year. He has had to make a late withdrawal because of muscle problems.