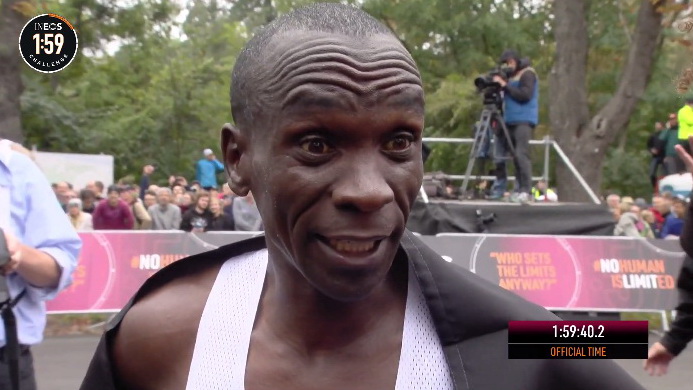 “I am happy my family had come to share in the history. I want to share in the positivity of sport, as through sport we can make the world a beautiful place. I would like to inspire others so that we can live where all human beings can run.”
-Eliud Kipchoge

Eliud Kipchoge ran the INEOS 1:59 time trial in Vienna, Austria early Saturday morning in the time of 1:59:40.20 – to become the first man to break the two-hour benchmark for the 42.195-kilometre marathon distance.

Flanked by 41 international athletes nearly half from Kenya, as well as athletes from Ethiopia, America, Australia, and Norway including all three Ingebretson brothers assisted with the wind breaking.

The trial included an electric car, which shot a laser graphic onto the road to indicate the pace that the athletes should run at.

They covered each kilometre in 2:50 plus or minus two seconds and many on target at exactly 2:50.

The effort transcended sports enough that the streets in Vienna and the ensuing cacophony from the fans was deafening.

“It was an honour just to be chosen to run in this event and to be the captain for our pace group and to run in front of Eliud. I am just happy to be here,” said American Matthew Centrowitz.

Australian athlete Pat Tiernan said, “All 41 of us want him to do it. He looked so good. This was such an honour to be a part of. We are all cheering him on.”

The weather was near perfect, however, there were a few moments with a slight rain shower. There appeared to be no wind and cool temperatures.

They ran seven successive 2:50 kilometres from kilometres 33 to 40 – but then he picked up the pace as he could spy the finish line, smiling and pointing to the crowd.

The pace car peeled off with one kilometre to go and a few hundred metres later, the pacers peeled off to allow Kipchoge to finish on his own to the throngs of cheering fans that flew from all over the world to watch the event take place.

He ran into the arms of his wife Grace who has never seen him race live. Their three kids were there too – the pandemonium at the finish area was electric.

For Nike, it was a saving grace of marketing after a stressful four years.

At the finish all 41 pacers mobbed him.