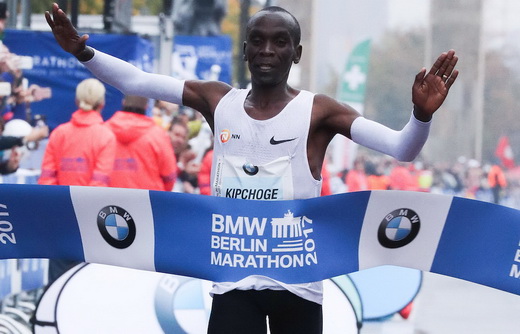 The BMW Berlin Marathon course is now home to 13 of the 22-fastest men’s marathon performances all-time, with Kenyan Eliud Kipchoge winning Sunday’s edition in the time of 2:03:32. The race dubbed the marathon of the century, failed to live up to expectations due to less than ideal weather.

Kenenisa Bekele of Ethiopia and Kenyan Wilson Kipsang were expected to compete with Kipchoge for the world record, which possibly could have made the first four times in history all from Berlin.

Below is the BMW Berlin Marathon press release:

Eliud Kipchoge confirmed his position as the world’s number one marathon runner by taking a dramatic win in the BMW BERLIN-MARATHON. The Kenyan clocked a world-leading time of 2:03:32 after coming from behind. In difficult weather conditions with rain and high humidity the world record set by Kenya’s Dennis Kimetto in Berlin in 2014 with 2:02:57 was out of reach in the final part of the race. However, Kipchoge can add another superlative to his collection: No one has ever run faster in such conditions. The 32-year-old clocked a „rain world record“ in Berlin on Sunday.

While top stars Kenenisa Bekele of Ethiopia and Kenya’s Wilson Kipsang did not even manage to finish a debutant caused a major surprise: Guye Adola of Ethiopia was leading the race until close to the 40k mark, hen Olympic Champion Kipchoge caught him and then surged ahead. Adola clocked 2:03:46 for second place, which is the fastest debut ever recorded on a record-eligible course. Fellow-Ethiopian Mosinet Geremew took third place in 2:06:12.

For the second time after 2015, Gladys Cherono took Germany’s most spectacular running event. The Kenyan clocked a world-class time of 2:20:23 after suffering in the final stages. Ruti Aga of Ethiopia was second in 2:20:41 while Kenya’s Valary Aiyabei took third with 2:20:53.

A record number of 43,852 runners from 137 countries entered the 44th edition of the race, which belongs to the Abbott World Marathon Majors Series and is an IAAF Gold Label Road Race.

On the day of the German national elections the BMW BERLIN-MARATHON made its own contribution to high drama on the streets of the capital. As planned the men’s race began at an extremely high pace with the 10km time of 29:04 pointing to a world record time of 2:02:40. But high humidity put paid to such a strong time for the leading group which included stars such as Eliud Kipchoge, Kenenisa Bekele and Wilson Kipsang and less familiar names such as Vincent Kipruto of Kenya and Ethiopia’s Guye Adola.

By halfway the group went through in 61:29 which put them right on schedule for Kimetto’s best time. Shortly afterwards the 5 and 10,000m world record holder Bekele, last year’s winner, dropped back. Later he dropped out as did Wilson Kipsang. The Kenyan pulled up after 30km, unable to continue.

The outcome was now to be decided in a duel which no-one had expected: Eliud Kipchoge, winner of all but one of his seven previous marathons and that four years ago, against Guye Adola. The Ethiopian had been adding to his profile with several high quality half marathons, including a bronze medal at the World Championships, and was now about to show that he could be the next great marathon runner from Ethiopia. Adola went into the lead after 35km and ran several kilometres about 25 metres ahead of Kipchoge. But Adola couldn’t quite pull off a major upset on his debut.

At 40 kilometres Eliud Kipchoge had made up the deficit and overhauled his rival. But Adola nonetheless ran 2:03:46 to become the second fastest Ethiopian marathon runner of all time behind Bekele and ahead of the former world record holder Haile Gebrselassie.

“That was definitely the hardest marathon I’ve ever run,” said Eliud Kipchoge, talking about the weather. “The conditions were far from easy. After Adola had taken the lead I was still confident of victory. I think I can still break the world record,” said the 32-year-old Kipchoge whose time of 2:03:32 was the second fastest of his career, following his victory in London in 2016 with 2:03:05. However he did run 2:00:25 on the Formula 1 circuit of Monza in Italy in early May, although this performance did not conform with IAAF rules. For the seventh time in succession, Berlin’s champion set a world best for the year.

Guye Adola proved a revelation on his marathon debut. Asked subsequently how he felt as he entered unknown territory in the marathon, he replied: “I enjoyed it, I enjoyed all of it, including the second half of the race – apart, that is, from the last two kilometres.”

In the women’s race a quartet of Gladys Cherono, Ruti Aga, Valary Aiyabei and Amane Beriso reached halfway in 69:40. The pace put the course record of Japan’s Mizuki Noguchi under threat, who ran 2:19:12 twelve years ago. At 30k Beriso dropped off the pace. Shortly before 35k the favourite Gladys Cherono broke away from Aiyabei and Aga. Although the Kenyan couldn’t maintain the same tempo in the closing stages, she was overjoyed at the finish: “After I was injured last year and had two successive stress fractures, this is a great success for me. I thought then I might not be able to regain this kind of level but now I have and believe I can also improve on my best time,” said the 34-year-old Cherono.