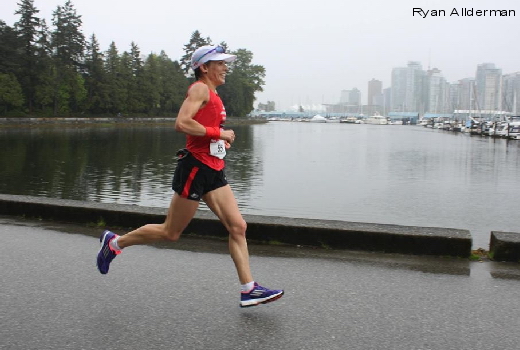 Ellie Greenwood is a Vancouver, BC based long-distance and ultra-distance runner who Sunday, May 25th won the prestigious Comrades Marathon in the time of six hours, 18 minutes and 15 seconds over the legendary Nurgalieva twins of Russia. In 2006 Elena Nurgalieva set the course record which remains at 6:09:23. She has won a record eight times.

The race takes place in South Africa between the cities of Pietermaritzburg and Durban and is actually not a marathon, but an ultra-marathon as it is runs a distance of 55 miles or 89.2 kilometres. It is the world’s largest and oldest ultra-marathon race.

The race is legendary and has hosted some of the world’s best distance runners for example Bruce Fordyce who has won the event a record nine times, Wally Hayward, Frith van der Merwe and Arthur Newton. Each year the race reverses direction, so there are separate up records and down records.

Christopher Kelsall: Congratulations on winning the prestigious Comrades Marathon. Did you start the race thinking that you would be in contention for the win?

Ellie Greenwood: Yes, I did think it was possible that I could win but I also knew that it was a big ask.  The Nurgalieva twins (Russia) have so much experience at Comrades and as Comrades is such a prestigious event I know there would be several other women who would be showing up in peak form and could threaten for the win.

EG:  I settled into a steady pace at the start, knowing that the Nurgalieva twins tend to go out hard.  At around 30km I passed from 4th place into 3rd and knew I was about four minutes back of the twins, which I was not too concerned about that early on in the race.  However very soon my legs began to feel very heavy and tight and I’ll admit that the whole race was a very tough mental and physical struggle.  At about 20km to go I was told that 4th was too far back to catch me but equally I was now about nine minutes back of the twins.  However I now began to realise that 20km was doable so felt more positive and picked up the pace whilst the twins began to struggle.  I was getting splits from spectators and knew I was closing in on the twins but even so was rather stunned when I passed them both in quick succession with about 4 to 5km to.  I then just ran as hard as I could to the finish!

CK: Although 55 miles or 88 kilometres constitutes it as an ultra-marathon, is it not a fairly short race for you?

EG: Not really.  I have run two 100 mile races ever and in fact 50 miles is my favourite distance.  It is, however, a fast race for me, being that it is on road. Any 50 milers I run in North America are typically on trail and so take considerably longer!

CK: You are based in Canada but are Scottish. So did a Canadian or a Brit win it?

EG: Officially a Brit! I hope to become a Canadian citizen by the end of the year and will then have dual nationality. Both Union Jacks and Maple Leafs along the sidelines buoyed my spirits during the race!

CK: How does Comrades compare to winning the 100-mile (161km) Western States Ultra?

EG: They are totally different events and are joint career highlights. I think that the Western States win is much more up for grabs than a win at Comrades, but Western States has a much higher profile in North America. Comrades has a field of 16,000-plus runners whereas Western just has a few hundred runners due to caps of how many are allowed under trail permits.

CK: You did okay at the BMO Sunshine Coast Half Marathon by finishing second to hometown favourite and rising star Kimberley Doerksen. Would you consider the half as a form of “speed work” for your ultra?

EG: Yes, in a way. There is no real need for me to have track speed for Comrades but you definitely need sustained speed and so the half marathon distance is ideal, BMO Sunshine Coast was a great Comrades prep course too as it is not flat and is net downhill, just like Comrades.

CK: You run the marathon in the low-2:40s. Any thought to specialising in the distance for a while to see how fast you could be?

EG: No.  I would like to still try at some point to run sub-2:40 but I love ultras and know that even if I improved my marathon time it would be nothing so special as to really get me anywhere.

CK: How soon after Comrades are you running again; then training in earnest?

EG:  I’m spending the week after the race with family in UK so that is good as it forces me to rest.  I’ll likely start easy short runs seven days post-race, but very much play it by ear and not do anything that feels like it is just delaying my recovery.

CK: How much mileage do you get up to in your training?

EG: My biggest week was 190km but I was walking a fine line with not wanting to get injured.  I did several months where 150km-plus per week was standard (with a lower mileage week every four weeks).

CK: Did you spend a higher percentage of your training time on asphalt in preparation for Comrades?

EG: Yes, but with caution as given I am used to running on trails a lot I needed to phase in the tarmac gradually to avoid injury and sore muscles in training

CK: Will you be going back to either Comrades or Western States soon?

EG: I’m not going to WS this year; although I am sure I will run it again in the coming years.  I will definitely target Comrades again in 2015 and future years.

CK: Being a competitive runner, “bucket lists” are not typically part one’s motivation, but do you have any races that you just have to do, like Death Valley for example?

EG: I have NO desire to run in Death Valley!  The whole temperature thing makes that more than just running and I like to compete in events where the running is somewhat enjoyable rather than suffering in scorching heat!  There are no specific bucket lists but I would like to try another World 100km and see if I can run faster than my 7h29 from 2010.

CK: Speaking of death, you won The Death Race. Will you go back to that event, apparently it’s a killer?

EG: I doubt it.  I do love it and really enjoyed that experience but there are so many more races out there that I like to try new events.  Death Race can have good competition but not in the class of other ultras and I do like to try go to competitive events.

CK: When and perhaps how did you discover ultras?

EG: I moved to Vancouver in about 2002 and ran my first marathon at Victoria that October.  I did a couple of marathons and as I had always enjoyed hiking I then got into trails running.  I then heard about the Fat Ass 50km on January 1st and the idea of running beyond the marathon intrigued me, so I did that 50km in 2005 I think.  There I met some passionate trail and ultra-runners and soon became hooked!

CK: Were you a runner in Scotland? Ever try Fell Running?

EG: Nope!  I lived in Scotland until I was eight and then England until I finished university when I was 22.  I ran my first half marathon when I was 21, just for fun and fitness.

CK: What is next for you?

EG:  I hope to be toeing-the-line at Speedgoat 50km on July 19th in Utah.  It’s part of the US SkyRunning series.  I’ll need to improve on my climbing and technical skills before then!