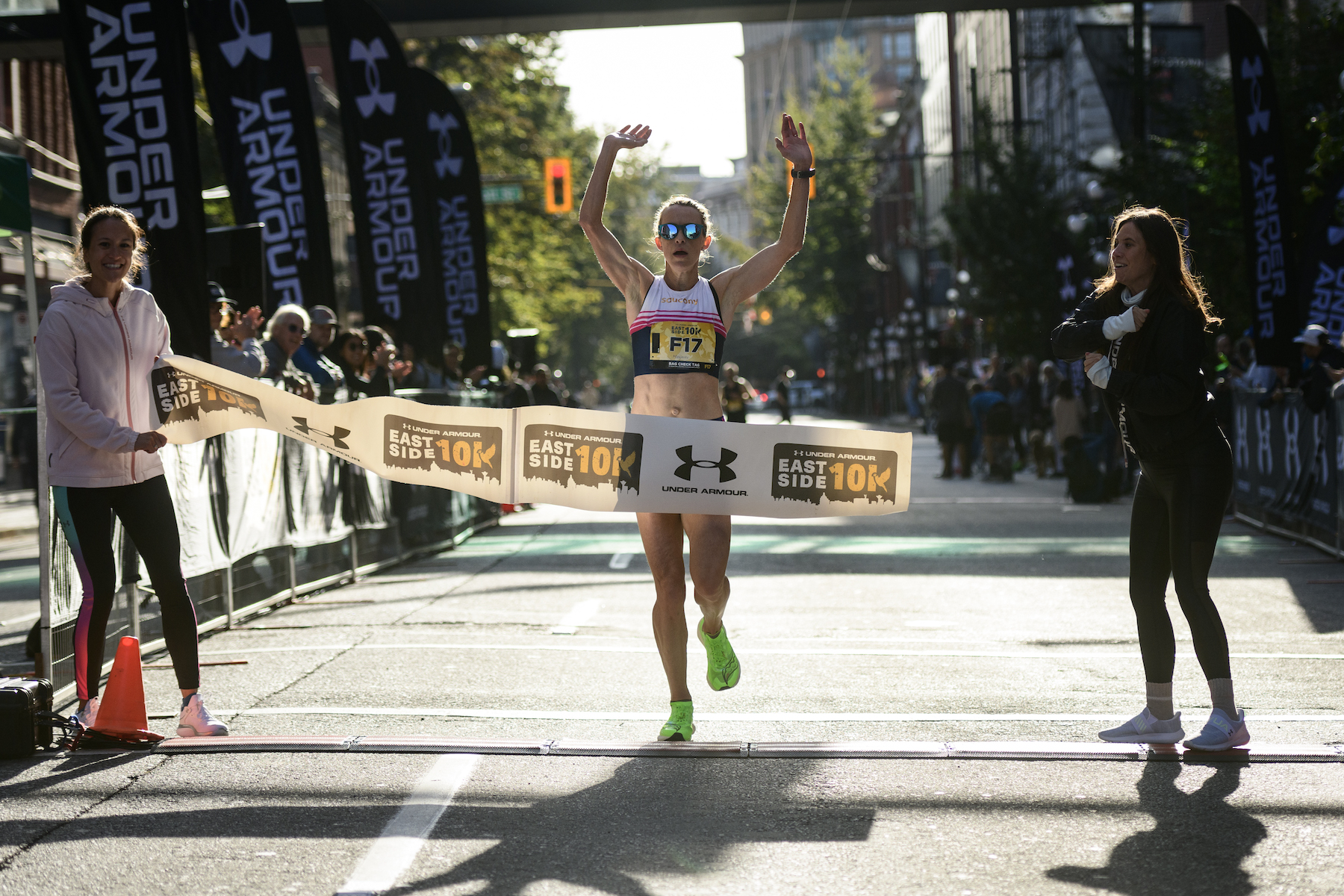 Malindi Elmore of Kelowna, BC, the Canadian record holder in the marathon at 2:24:50 won the Eastside 10K Sunday in a new course record time of 32:37. The previous record was also held by Elmore from the 2019 running of the event, where she clocked a 32:44 performance.

Elmore is getting herself ready for the October 16th running of the Toronto Waterfront Marathon.

“I felt really good off the line,” said Elmore, who maintained a steady lead throughout the race. “I ran a PB so that’s always awesome. I’ve done nothing this fast, but on the day, the strength is there,” referring to the Toronto Marathon.

From early on, defending champion and women’s course record holder, Elmore, lead the race before breaking her previous course record of 32:42, which had been set in 2019. Vancouver’s Leslie Sexton was close behind, crossing the finish line in 34:11, followed by the Vancouver Half Marathon winner Samantha Jory in 34:58.

Ben Preisner of Vancouver tied the course record at 29:20.

The elite men had a close race, with Preisner and Trevor Hofbauer pushing each other throughout much of the course. In the end, Preisner broke ahead to take gold. Hofbauer placed second in 29:26 and Thomas Broatch finished in third place in 30:00.

“It’s always a great run locally here in Vancouver, so I’m very grateful for all the organizers who put it together for us,” said Preisner, who admitted he wasn’t confident about securing the win. “Trevor is a very good competitor and he was always on my shoulder. It was a good incentive to keep pushing hard. I don’t think there was ever a place where I was super comfortable.”

Malindi, Sexton, and Hofbauer will be building off the momentum from their strong finishes today as they prepare for the TCS Toronto Waterfront Marathon on October 16, 2022.

The 2022 Under Armour Eastside 10K has raised over $31,860 to date, surpassing the event’s previous fundraising record of $30,022, which was set in 2015. Dedicated to supporting Vancouver’s Downtown Eastside community, this race has partnered with four local charities: CLICK – Contributing to Lives of Inner City Kids, Urban Native Youth Association, Downtown Women’s Eastside Centre, and PHS Community Services Society. With a focus on creating sustainable events, Canada Running Series has also partnered with two environmentally focused charities, Trees for Life and Trans Canada Trail. The deadline to donate to the official charity partners is September 30, 2022.