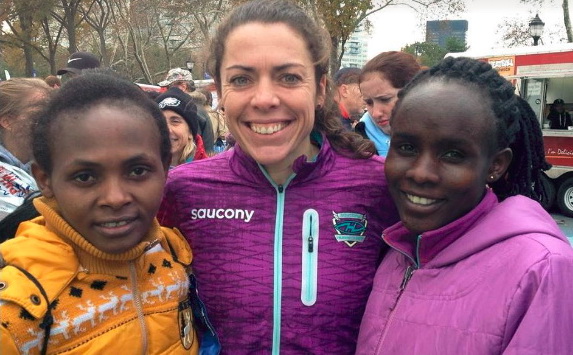 Cold Lake, Alberta’s Emily Setlack (Tallen) won the 2017 Philadelphia Half Marathon Saturday in the time of one-hour, 13-minutes and 59-seconds (1:13:59). She bettered Kenyans Sophy Jepchirchir and Margaret Wanjiru by 59 seconds and 1:46 respectively.

Setlack owns a personal best of 1:13:28, which she set in Vancouver on May, 7 of this year during the BMO Vancouver Half Marathon.

“I was happy with the race. I started out too fast at Scotiabank Toronto Half Marathon, so today, I wanted to run a smarter race,” shared Setlack. “So I started out more conservative for the first 10K. I passed the two Kenyan women at the 8-mile mark (13K). They had about a 20-30 second lead early on.”

Setlack credits her husband Matt Setlack for help. The two often train together in the remote town of Cold Lake.

“I couldn’t have done it without him,” she added.

Setlack is in a position to be nominated to Team Canada for the 2018 IAAF World Half Marathon Championships that will be taking place in Valencia, Spain on March 24. The qualification standard is sub-1:16:00. Below is a list that is no longer visible at Athletics Canada’s website that indicates the top-performing Canadians within the qualifying window for Valencia.

The BMO Vancouver Half Marathon is apparently not an eligible course. Setlack’s third-place standing may be adjusted to fifth behind Ontario’s Victoria Coates’ 1:14:43 from Indianapolis on Nov. 5th of this year as well as Vancouver’s Dayna Pidhoresky’s 1:13:45 from Montreal on April 23rd.

Sasha Gollish leads the country with her Oct. 8 performance of 1:12:55 from San Jose.

The Canadian record is held by London, Ontario’s Lanni Marchant, who currently lives in Chattanooga, TN. She ran the distance in 2014 in the time of 1:10:47. She also owns the Canadian marathon record of 2:28:00, which she accomplished on the Toronto Marathon course in 2013.

She is expected to run the Houston Half Marathon in January. Setlack won the 2016 North America, Central America and Caribbean Athletic Association (NACAC 10K) road gold medal in Guadalupe.

Matt finished 34th overall, two seconds ahead of Emily. He was 10th in his age-group.