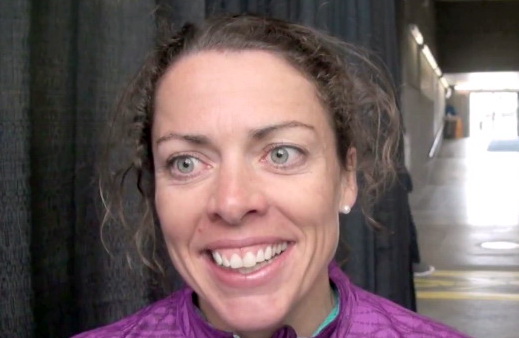 Emily Setlack of Cold Lake, Alberta won the 2017 Scotiabank Waterfront Half Marathon Sunday, October 22nd. She was the first finisher of 4,978 women and finished 21st overall out of a total of 9,736 runners (men and women).

“I am happy with my effort but do not feel like it’s a great indicator of my current fitness,” shared Setlack. “I was struggling with a cold going into the race which left me hacking and coughing a lot throughout and I felt like it really threw my rhythm off.”

Setlack has suffered a cold for a while but wasn’t going to let the opportunity to race in one of Canada’s premiere road events, which is part of the Scotiabank Canada Run Series, derail her.

“Half the battle is making it to the start line healthy, all part of the game! I wanted to commit myself to a pace that my training suggested I could do, I put myself on the line knowing that I was not 100 percent, but at the time felt like it was worth the risk.”

Setlack finished ahead of University of Virginia Cavalier (also known as the Wahoos or hoos) Cleo Boyd of Kingston, Ontario.

“I am looking forward to racing the Philadelphia Half in four weeks and look forward to beating today’s time,” added Setlack.

She is the NACAC 10K gold medallist from the 2016 Guadalupe edition.

All in the Family: Cleo Boyd is the daughter of long-time competitive Canadian runner and Coach Steve Boyd. He is a three-time Canadian champion on the road, cross-country and on the track with personal bests of 13:46 for 5k, 28:41 for 10k, 1:03:36 for half marathon and 2:17:28 for the marathon.

Emily Setlack’s husband Matt Setlack is also a competitive runner who has raced in the IAAF World Mountain Running Championships for Canada.