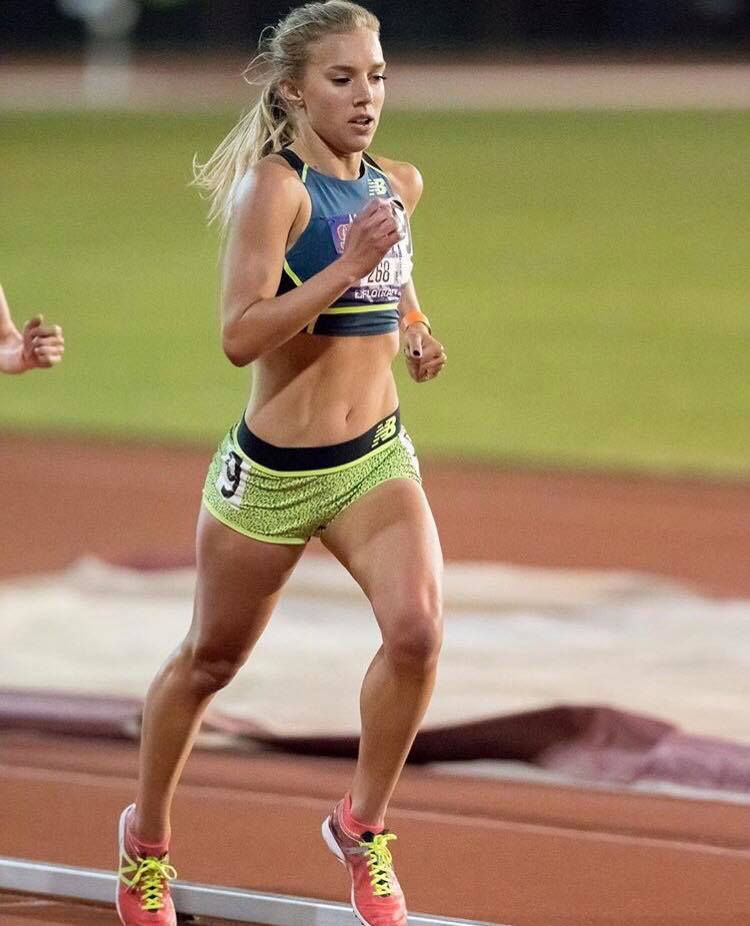 Fortune favours the bold and Emily Sisson ran that way during the 10,000m event at the U.S.A. Olympic Trials on Saturday with a commanding 31:03.93 finish time in the heat. At 29 degrees Celsius (84F) it is warm, especially for Eugene. It’s hot when racing for 25 laps on the track, which was likely even warmer. Due to the forecast of a heatwave, organisers moved the 10,000m event to 10:00 AM.

Kara Goucher said, “not a single athlete was complaining about that.”

After sitting in the lead pack for approximately four laps, Sisson ran to the lead and boldly did not relinquish her position. During the latter laps of the race, she, as Goucher put it, “turned the screws on the rest of the field,” as she pushed the pace faster.

The Milwaukee native’s final kilometre was 2:55.98, the fastest by any runner during the race. Seven of the kilometres were run between 3:05 and 3:08. The first km was run conservatively, as there were so many athletes on the start line, the rarely seen split start was arranged. There were 41 starters in total. Thirty-seven finished, which is impressive considering that just two years ago, the 10,000m seemed to be a dying event, so much so that the International Olympic Committee was seeking to have World Athletics remove it from the Olympic program.

Karissa Schweizer took second in the time of 31:16.52, while Alicia Monson clocked a 31:18.55. Schweizer recorded a 2:59.50 final km. The three going 1-2-3 will be named to the American Olympic team. Sisson’s performance is a Trials record.

The Olympic standard is 31:25.00. The top three were the only athletes to run faster than the standard. Seven ran nuder 32 minutes, while 18 ran under 33. Considering the heat and performances, the 10,000m in the US is certainly alive and well.

Timing is everything and Gabby Thomas has rounded into terrific form just in time to win the U.S. Olympic Trials and National Championships in the 200m event. With the win, she is named to the Olympic team. She set a world-leading time, a meet record, and a personal best with her 21.61 finish time. She made it look easy.

The Harvard grad learned recently that she had a tumor on her liver. Fearing cancer, she prayed that the tumor is benign and if so, she would win the Trials. Two days before arriving in Eugene, she got the good news. She then followed through on her promise.

Thomas is now the second-fastest woman all-time behind only Florence Griffith-Joyner, who clocked two faster runs of 21.34 and 21.56 during her career. Under the pressure of the Olympic Games, Thomas may be the new world record holder next month.

Finishing in second place was Jenna Prandini stopping the clock at 21.89, while Anavia Battle took third in 21.95. Allyson Felix, who is running in her final Olympics next month, after a storied career, took fifth in the time of 22.11.

So so so grateful to everybody-especially my coach.
Sending love to everyone who has supported me up to this point and to my new supporters. ❤️🤞🏽 We’re just getting started. pic.twitter.com/mg4Q3GXoK8

The final day of the competition is Sunday. The top three finishers in each event with few exceptions will be automatically named to the US Olympic team.