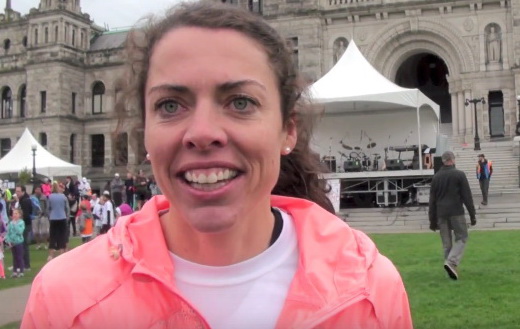 Thirty-nine-year-old Emily Tallen-Setlack finished the Philadelphia Half Marathon Sunday in the time of 1:12:36. It was a new personal best for the Kingston, ON runner. What was more impressive is the fact that she is still in the middle of marathon training.

She hasn’t decided which marathon to race this fall but she has her choices. In April this year, she debuted at the distance in Rotterdam with a 2:35:47 performance.

On Sunday, it was warm, so she started conservatively and patiently pulled in other runners.

“I started off in about 6th or 7th position overall for women and slowly closed the gap on Jordan Hasay (who was probably doing a workout) and Kelsey Bruce,” said Tallen-Setlack. “It was quite humid and I really felt the warm temperatures at 12K into the race. I tried to focus on getting to mile nine. I knew if I could maintain pace until that point, I could hang on for another 23 minutes of hard running.”

Asked about her training Tallen-Setlack said, “Training has been going well, and I’ve been enjoying the process and challenge of the build. Workouts are workouts and don’t mean anything until you race so I try not to get too caught up in what a session may project time-wise. I am in the thick of marathon training and didn’t do a full taper so I was a bit nervous going into this race.”

Her coach is Jim Finlayson of Victoria, BC, a national champion in the marathon and national 45-50 age-group record holder in the half-marathon, having run the Copenhagen Half Marathon in 2018 in 68-minutes.

“My coach Jim is smart and carefully plans, so I had confidence in the bigger picture and wanted to run with whatever fitness I had on the day, letting go of any emphasis on outcome and just running as hard as I could on the day. Although it was warm, conditions will never be perfect—there is almost always a limiting factor: weather, the course, and injuries,” added Tallen-Setlack.

Tallen-Setlack will decide which fall marathon she will race over the next few days.

SHOESTRINGS: Another 39-year-old Canadian ran a road personal best on the weekend. Saturday, Malindi Elmore of Kelowna, BC won the Eastside 10K in Vancouver in the time of 32:44. Elmore is also running a fall marathon this year and debuted in Houston in January with a 2:32:15 performance.