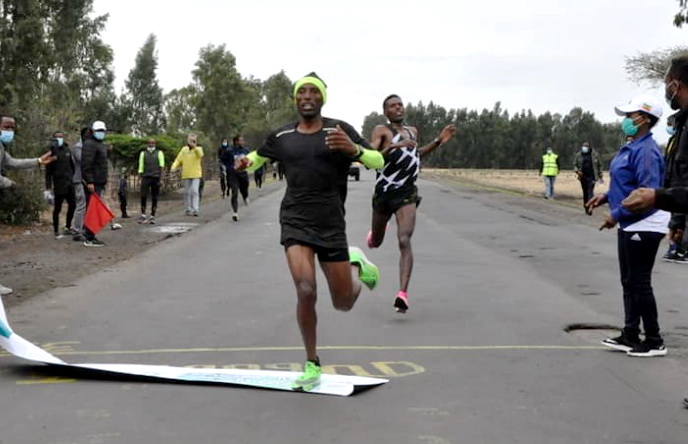 The Ethiopian Tokyo Olympic Marathon Trials were held Saturday in Sebeta City, Ethiopia, a town located in the geographical centre of the country at more than 7300 feet (2,356m) of elevation. The top three male and female finishers over the 35K course will represent the East African nation in Tokyo this summer.

Crossing the line in second was Lelisa Desisa in the time of 1:46:15. The 31-year-old veteran won the 2019 Doha World Athletics Championships race and owns a best of 2:04:45 from the 2013 edition of the Dubai Marathon.

Sisay Lemma finished third just three seconds back of Desisa. Two years prior in Berlin he set his personal best at 2:03:36.

According to the Ethiopian Athletics Federation, those are your three Tokyo Olympic team members. Curious why the federation chose just 35K, as the late fade in the marathon begins at approximately 32K and continues. The best 42.2K marathon runners may not have finished top-three here. Additionally, 2:01:41 marathon runner Kenenisa Bekele was told not to run despite claiming to be healthy. His Berlin 2019 performance, just two seconds shy of world record holder Eliud Kipchoge, was run in less than ideal weather. Bekele, by all accounts, should have run if Ethiopia wants to field the best team.

On social media, Ethiopian running fans expressed concern about Bekele being absent and commented in Amharic, which is translated to, “If the Olympics do not come without Kenenisa, we will ask you for treason. The aspiring athlete will only promote the name of our country by participating in the gold medal. If not, we consider you an OLF soldier.”

Roza Dereje clocked a 2:00:16 for third. She was also third in London 2019 with a 2:18;30 she has several other wins under her belt already, which suggests the 23-year-old will have a long athletics career.

The Tokyo Olympic Marathons and racewalk events will not be held in Tokyo, but 800K north in Sapporo to avoid the potential summer heat of Tokyo. The decision came after many athletes dropped out and some taken to hospital during the 2019 Doha World Athletics Championships Marathon.