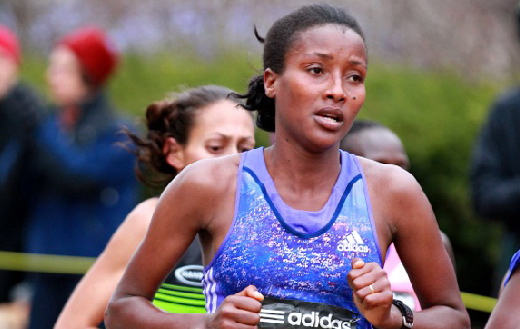 As a young girl Shure Demise dreamed of becoming a world class runner like her hero and compatriot Derartu Tulu. Then, in January of this year, the young Ethiopian raced to a fourth place finish at the Dubai Marathon recording a stunning time of 2:20:59 in her marathon debut.

That mark is almost three minutes faster than Tulu, the two time Olympic 10,000m champion and winner of the London, Tokyo and New York Marathons, ever ran for the distance.

Most remarkable was the fact Demise celebrated her 19th birthday just two days before Dubai. The $20,000 US prize money she earned was, indeed, an expensive birthday present.

The result is in fact an ‘unofficial’ world junior record although the IAAF doesn’t keep junior records in the marathon.

“I used to watch Derartu Tulu on television,” Demise recalls. “Then I got motivated by her brilliant talent and wanted to be like her. So I started running.

“Then when I started running I got to know about (three time Olympic champion) Tirunesh Dibaba. I heard on the TV that she was so famous, and an elite athlete of Ethiopia.”

Demise hopes the experience she has gained in racing in Dubai – followed by an 8th place finish at this year’s Boston Marathon – will help her as she prepares for the upcoming Scotiabank Toronto Waterfront Marathon, October 18. It is a race she has only heard about from some of her training partners in Ethiopia.

“I learned a lot about techniques of running (in Dubai). Before this race I didn’t know that water was taken (during the race) but in that race I saw and used it in Boston. I just want to set the Toronto course record and I want to go with that pace.”

Demise grew up in the southern part of Ethiopia in a town called Bore. It is in a fertile region known as Guji zone.

“My parents are farmers,” she reveals, “and the countryside is green land where many cattle are found. My parents have thirty cattle.”

“There are ten children in the family: five brothers and five sisters. My brother is a policeman and they shifted him to Addis where he works in police station. I lived with him at first but now I live alone in Addis.”

Like many Ethiopian distance runners, Demise was introduced to running at school where cross country is the main sport and where children all know the names of the leading Ethiopian runners. As a sixteen year old she ran 33:24 in a 10km in Assella, Ethiopia. That was at 2,430m/ 8,000 feet altitude and the result quickly attracted attention of coaches and officials.

Today she trains with coach Gemedu Dedefo as part of the Demadonna Athletics group. The group includes Aselfech Mergia, a three time winner of the Dubai Marathon and Tirfi Tsegaye. The latter won the 2014 Berlin Marathon in 2:20:18 and was the second place finisher in the 2010 Scotiabank Toronto Waterfront Marathon. No doubt she will provide useful intelligence on this IAAF Gold Label race.

In February 2014 Demise finished an impressive 3rd in the junior women’s race at the Jan Meda International Cross Country meeting.

Rather than compete on the track, which would be the natural progression, she decided to focus on road racing instead. A third place finish in the Rome Ostia Half Marathon with a time of 1:08:53 helped her decide to go straight to the marathon even at her early age.

“I saw many athletes being successful in marathon running so I wanted to proceed directly to the marathon,” she confirms.

As for the future Demise wants to create a name for herself much like her predecessors the leading Ethiopian Olympians.

“Yes, during my training time I met most of them,” she says, “but I didn’t get the chance to sit with them and share experiences. In the future I hope I can do that.

“I want to become a number one well known athlete and to participate in the Olympics. Yes, with no question I want to represent my country.”

In Toronto she will line up against a strong women’s field which includes the previously announced Sharon Cherop of Kenya, the course record holder at 2:22:43, and Canadian record holder Lanni Marchant.