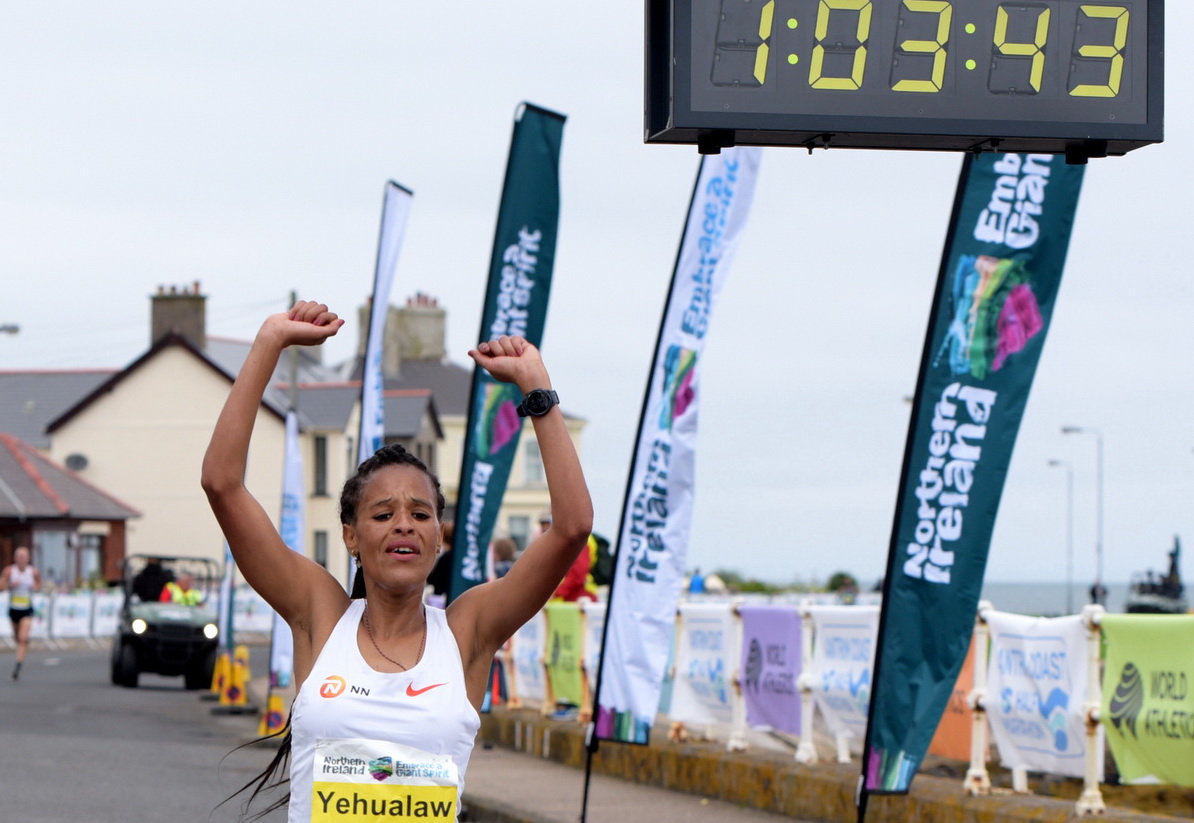 Ethiopian, Yalemzerf Yehualaw, took down the world half-marathon record at the Antrim Coast Half Marathon Sunday, recording a one-hour, three-minute, and 43-second performance. She finished in ninth place overall.

It is a stunning achievement for the 22-year-old who was representing the NN Running Team – the same team that Eliud Kipchoge and Kenenisa Bekele run for. She was simply unstoppable on the flat course in Larne, Northern Ireland.

She took 19 seconds from the previous mark held by Kenyan Ruth Chepngetich.

“A dream come true, something I have worked for all my life,” said Yehualaw. “I was frustrated after not getting it in Istanbul but I am extremely happy now!”

Her closest competitor was Kenyan, Vane Nyamboke, finishing in the time of 69:45, it wasn’t even close. Rose Harvey of Britain finished third in the time of 70:29.

The women’s mixed (men and women) record was 64:02, the new record is pending. The women’s only race half-marathon record is owned by Kenyan Peres Jepchirchir at 65:16 from the Gdynia World Half Marathon Championships last year. Jepchichir took gold during the Tokyo Olympic Games over marathon world record holder fellow Kenyan Brigid Kosgei. Kosgei has run a world’s best time of 64:28, but not ratified by World Athletics as the course is not ratified due to its point-to-point direction.

Coached by Tessema Abshero, Yalemzerf only made her international debut in 2019 but showed her exciting potential that year – winning three out of four half marathons, which was highlighted by winning gold at the All Africa Games.

In 2020 she earned bronze at the World Half Marathon Championships in Gdynia, Poland before taking the win with a stunning new personal best of 64:46 at the New Delhi Half Marathon.

The men’s winner was Jemal Yimer, also of Ethiopia. He clocked a 60:30. Fellow countryman, Tesfahun Aklnew, took second place and finished just one second back at 60:31. Shadrack Kimining of Kenya finished third in the time of 60:32. The top British athlete was Marc Scott in fourth clocking a 60:35 performance. The top Irish athlete was Ryan Creech recording a 63:26 for sixth overall.

Yimer owns the Ethiopian national record with his Valencia 2018 performance of 58:33, where he finished second. He finished fourth at the 2017 World Cross Country Championships in Kampala, Uganda. Aklnew, at just 22, owns a best from November last year in New Delhi, India recording a 59:22 performance.

For Creech, the top local athlete it was a personal best performance far better than the 29-year-old’s performances at other distances and his prior best at 67:55 from 2020.