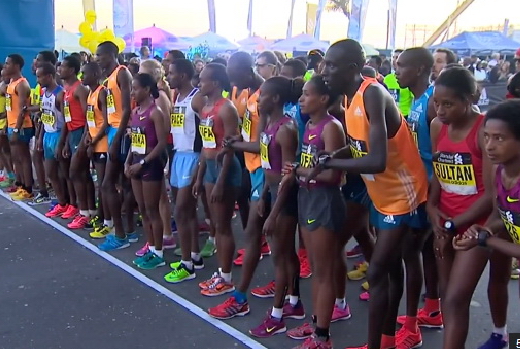 Two marathons that will take place three weeks and 6,273 kilometres (3,897 miles) apart in January, will provide several Ethiopians athletes the opportunity to qualify for the 2020 Tokyo Olympic Games or simply make a menikorakuri of cash.

Sunday, January 5, the Xiamen Marathon and Friday, January 24, the Standard Chartered Dubai Marathon will be run.

This year the men’s favourites are Solomon Deksisa and Seifu Tura, while all eyes shall be on the fastest women in Worknesh Degefa and Kebede Alemu Megertu – all Ethiopians.

Megertu, at just 22-years-of-age, owns a best of a competitive 2:21:10 from Frankfurt three months ago. She will be competitive.

Twenty-five-year-old Deksisa ran Amsterdam in October 2018 in the time of 2:04:40. What sounds like a ridiculously fast time today, is only the 55th fastest all-time (including Boston results, not eligible for records).

He is well-known for running a 62:19 half-marathon at the age of 17 at the 2010 Reims, France half-marathon. Although the performance doesn’t count as a record – apparently the course was not certified.

Tura might find himself neck and neck at the finish with Deksisa, his personal best is just four seconds slower at 2:04:44 from Dubai 2018.

In Xiamen, expect defending champions Dejene Debela and Medina Demi Armino to go for the wins. If they do, they get a fair chunk of a $2-million pot. Dubai dropped their purse from 816,000 to 385,000.

Debela has run as fast as 2:05:46 three months ago in Chicago. He is going for the three-peat.

The temperatures will be mild-to-slightly warm in Xiamen with a forecasted low of 16 and a high of 22.

Athletes can qualify for the Olympics by achieving the standards as set by World Athletics. The new time requirements are more difficult than in the past.

They can also qualify according to his or her World Athletics ranking position in the selected event at the end of the respective qualification period.

“The process is designed to achieve about 50 per cent of the target numbers for each event through entry standards and the remaining 50 per cent through the World Athletics ranking system,” wrote the global governing body in a press release.

The standards will be meaningless in Dubai, but the national rankings will matter in Ethiopia. Should fast times be run, expect more off-the-charts marathon performances by fellow Ethiopians. In Xiamen, athletes will have to have lifetime level performances to run in Tokyo this summer, not likely based on weather and past performances – they are there for the prize purse. As a World Athletics Gold Label race, athletes will be seeking life-altering pay.

In 2019, Dubai nearly halved their prize money from 2018 – but for third world-level athletes, winning is still well worth it on January 24.