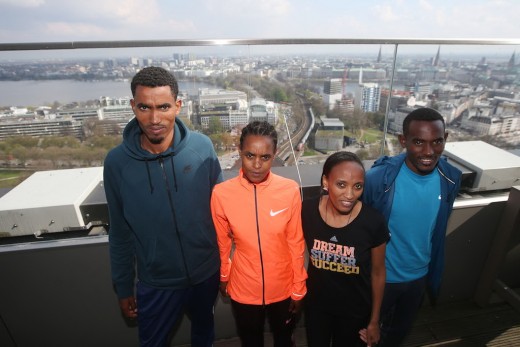 A quintet from the impressive stable of Ethiopia’s world class runners will be aiming for top times with Olympic selection in mind at the Haspa Marathon Hamburg on Sunday. Among those striving for the trip to Rio will be the fastest man in the world at the distance this year, Tesfaye Abera. The 24 year old triumphed in Dubai in January with his lifetime best of 2:04:24. His key rivals should include compatriots Feyisa Bekele and Abayneh Ayele, the latter having finished fourth in the Word Half Marathon Championships in March. In the women’s field, Meseret Hailu returns to defend her title and this looks a tough task with her fellow Ethiopian Meseret Melkamu in the field, whose best of 2:21:01 is eight seconds faster than Hamburg’s 2015 champion. This contest looks capable of putting the women’s course record of 2:24:12 under severe pressure while the quality of the men’s field also suggests their course record could be threatened. The current holder is Kenya’s Eliud Kipchoge who ran 2:05:30 three years ago. Taking into account various events held in conjunction with the main race, approx. 23,000 runners have entered the 31st edition of the Haspa Marathon Hamburg.

„We are proud to welcome the athlete with the fastest time in the world this year. It is the first time in the history of our event that the world leader will run the Haspa Marathon Hamburg. However the women’s field is also strong. If weather conditions will be good then we expect some fast times on Sunday,“ said Event Director Frank Thaleiser during the press conference with the international elite runners.

Last November a referendum held in Hamburg caused a surprise when the outcome led the city to withdraw its candidacy as host for the Olympic Games 2024 but barely five months after this decision, the Olympics are again a conversation piece in Hamburg. A number of athletes from various nations intend to break their federation’s qualifying time for Rio on Sunday.

“I have trained well and hope to win on Sunday“, said Tesfaye Abera, who is in pole position for Ethiopia’s Olympic selecton after he emerged victorious from the traditionally
speedy Dubai Marathon in January. The Ethiopian federation’s philosophy usually is to nominate their three fastest runners at the end of the spring marathon season, an approach which excludes performances prior to the current year. Achievements which fall outside this time span do not count, regardless of super star status, which is how Haile Gebrselassie failed to make the grade four years ago.

However Dutch manager Jos Hermens feels that this time the approach might be a bit different so that spring marathons might be quite important. „Because of the very flat course with just a few corners in Dubai there are always very fast times. I think a very good result from Dubai alone might not be enough for a ticket to Rio. The federation will also look to the European spring marathons. If Tesfaye runs 2:05 or 2:06 in Hamburg on Sunday he will surely have a very good chance to be selected for the Olympics,“ said Hermens, who is the manager of Abera.

Tesfaye Abera was a late addition to the elite field of the Haspa Marathon Hamburg after injury forced his compatriot Shumi Dechasa to withdraw. The 2014 winner has been suffering with knee problems. But Abera’s plans always included running a spring marathon following his race in Dubai.

While Feyisa Bekele will be looking to recover his best form on Sunday – he ran his fastest time of 2:06:26 in Amsterdam in 2012 – his fellow Ethiopian Abayneh Ayele has already delivered proof of his qualities this year, finishing fourth and just outside the medals at the World Half Marathon Championships in Cardiff. His time of 59:59 in the Welsh capital in March was his fastest ever for the distance. „I know that Hamburg has a fast course. So I am optimistic that I can run sub 2:06 here,“ said 28 year old Ayele.

The plan is for the leading group on Sunday to go through the halfway point in just outside 63 minutes which would leave them with some room for an attack on a world class winning time. If the Ethiopians misjudge the pace, the Kenyan Philemon Rono might be one of those to take advantage. He will be running for the third time in the Haspa Marathon Hamburg, having made his debut in 2014 and set what remains his best time of 2:07:07.
Meseret Hailu’s plan to retain the title in Hamburg has taken on a more demanding aspect with the addition of her compatriot Meselech Melkamu to the start list. Melkamu is the African record holder for 10,000m with 29:53.80 and her impressive marathon best of 2:21:01 was achieved on her debut at the distance in Frankfurt in 2012. The 30 year old has already showed excellent form this year with third place in Dubai in late January in 2:22:29. Such is the strength of competition for Ethiopia’s Olympic Marathon team, Melkamu is likely to have to improve on that level of performance in Hamburg to remain in Olympic contention.

“I have big motivation to run in Hamburg because of my hopes for Olympic selection. My goal is to go to Rio,” said Meselech Melkamu while Meseret Hailu explained that the prospect of possible Olympic selection drives her on as well: „If I run well then I can go to Rio!“

For that reason the Ethiopian women can be expected to set a fast pace from the start with a half marathon split of 71 minutes as the target. They may well have company in the form of the Kenyan Sarah Chepchirchir who will run after dropping out of her marathon debut in Nagoya last month. After disappointment in Japan, she’s making a renewed effort in Hamburg.