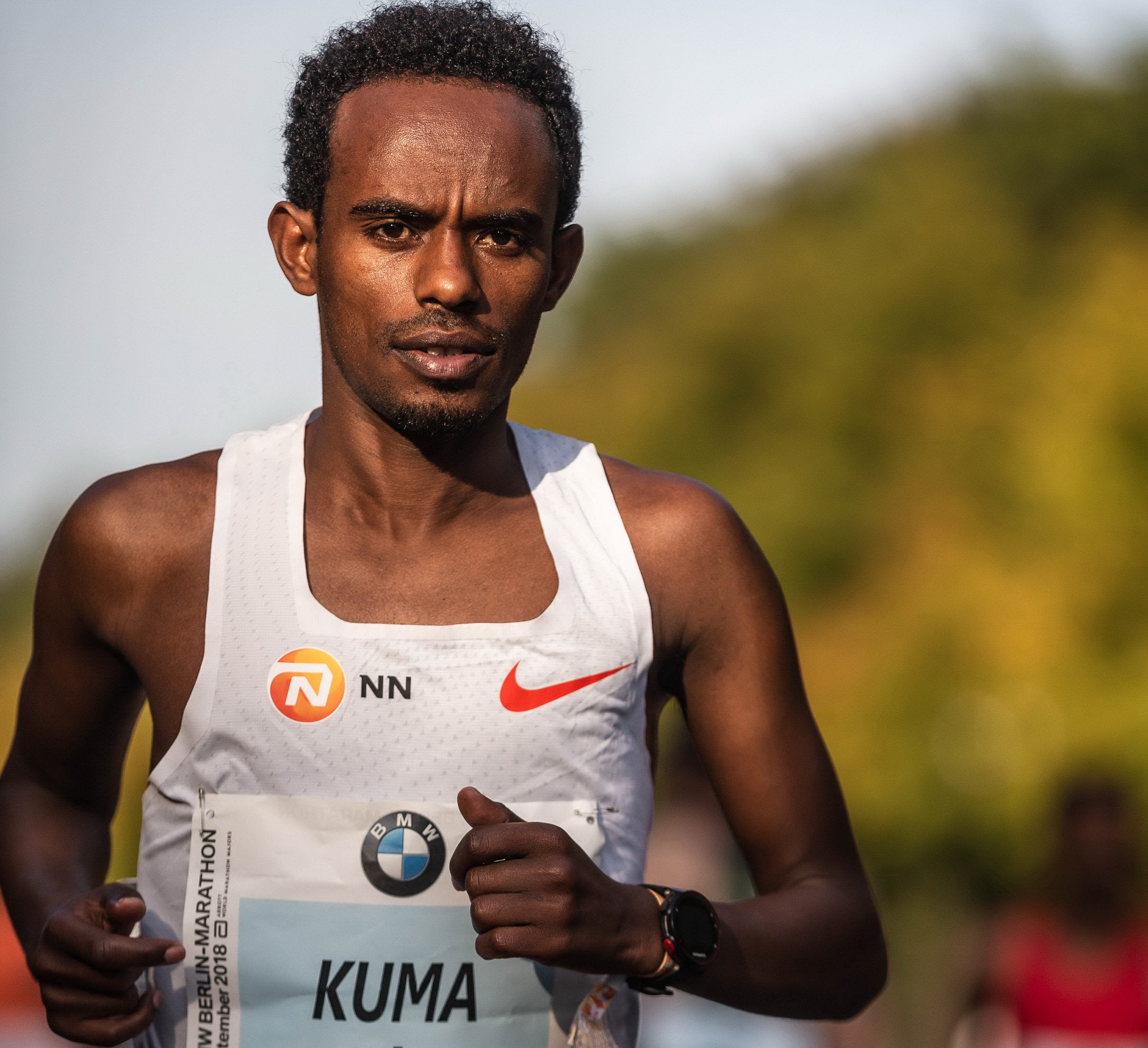 Ethiopia’s Abera Kuma just might be the most talented athlete to race the Scotiabank Ottawa Marathon this year. Indeed, organizers of this IAAF Gold Label event are confident they have the man who can threaten the current course record.

The 28-year-old has twice dipped under the magic 2:06 mark in his career, most recently when finishing second in the 2018 Rotterdam Marathon in a personal best 2 hours 5 minutes and 50 seconds. The other occasion, for those keeping count, was at the 2014 Berlin Marathon where Kuma finished 3rd (2:05:56). That, incidentally, was a world record race as Kenyan Dennis Kimetto ran 2:02:57 a record, which has since been broken by Eliud Kipchoge.

In between these two races Kuma has made his mark across the globe. Now he sets his sights on racing in the Canadian capital on May 26th.

“I want to win and I want to run fast. I hope the conditions will be kind to me,” he declares. “Yes (the course record is a target) though it all depends on the conditions.”

Kuma’s performance in Rotterdam was all the more startling since he had run, and finished, Japan’s Lake Biwa Marathon (2:09:31) just 35 days earlier – hardly the ideal preparation for a world-class marathon.

“At Lake Biwa, I did not feel well and had a bad day at the office,” he explains. “I felt like I ran at 95% without being able to give more than that. After finishing I still felt strong and very disappointed about the race. I needed to take revenge quickly and the gamble paid off.”

Clearly, Kuma has a level of confidence matching his ability. Unlike many of today’s marathoners, he took up road racing after a successful career on the track. Twice he represented Ethiopia at the IAAF World Athletics Championships finishing 5th in the 2011 5000m final in Daegu and 5th in the 2013 Moscow 10000m final. With 5000m/10000m personal bests of 13:00.15/26:52.85 he has basic speed matched by very few road racers.

“I had a short track career but always wanted to go to the road fairly quickly,” he reveals. “Track has helped me to be a stronger roadrunner though.

“I like the endurance that belongs to road running and marathons. Running is fun to do and I enjoy it, but it is also my job. In marathon running the financial aspect is important.”

The lucrative prize money in road racing, coupled with the fact there is a limited number of track races with decent prize money, has seen many young East African athletes go straight to the roads. First place in Ottawa is worth $30,000 CDN with another $10,000 on offer for a course record.

As Kuma says, running is his job. And, he is happy to share his experience with younger up and coming Ethiopian runners many of whom are part of the training group under coach Tessema Abshero, who himself was a 2:08 marathoner.

“I would advise others to run track but I also know that it is not easy to do that as the track races are scarce these days,” Kuma admits.

Training is going well currently he says despite a mediocre performance at the Mumbai marathon in January. There he finished 7th in 2:13:10.

“I am preparing really well and my last test (a half marathon in Spain where he ran 60:41) was good. Now I am finalizing the endurance part to bounce back strongly after a disappointing race in Mumbai,” he reports. “In Mumbai, the conditions were very difficult (heat, air quality) and the course was tough. I was with the lead group for a long part of the way but suffered a lot in the last 7 km.

“I train twice a day. In the mornings with the group and in the afternoons I train alone or with Tesfaye Abera. We do our long runs on Monday (30-45km) and our fast tempo runs on Thursday (20-30km). In total I train with the full group 5 times a week in the mornings.”

Abera, it should be noted, has a marathon personal best of 2:04:24. There are others of similar quality amongst Kuma’s training partners. Most significantly, all of this training is done at altitudes of at least 2600m (8500 feet). It’s hard work but with a group sharing the load and the drudgery, it is normal. Downtime is used to relax and recover and wait for the next workout.

“I spend my time relaxing, watching tv and hanging out with athletes,” Kuma reveals. “My life is all about running, there is no escaping it when I am not training. I hang around with runners, I eat with them, I drink coffee with them. We watch table tennis on television together.”

Kuma knows the Ottawa race will include other strong performers and welcomes the competition. It is, after all, what will help bring him closer to that coveted course record.