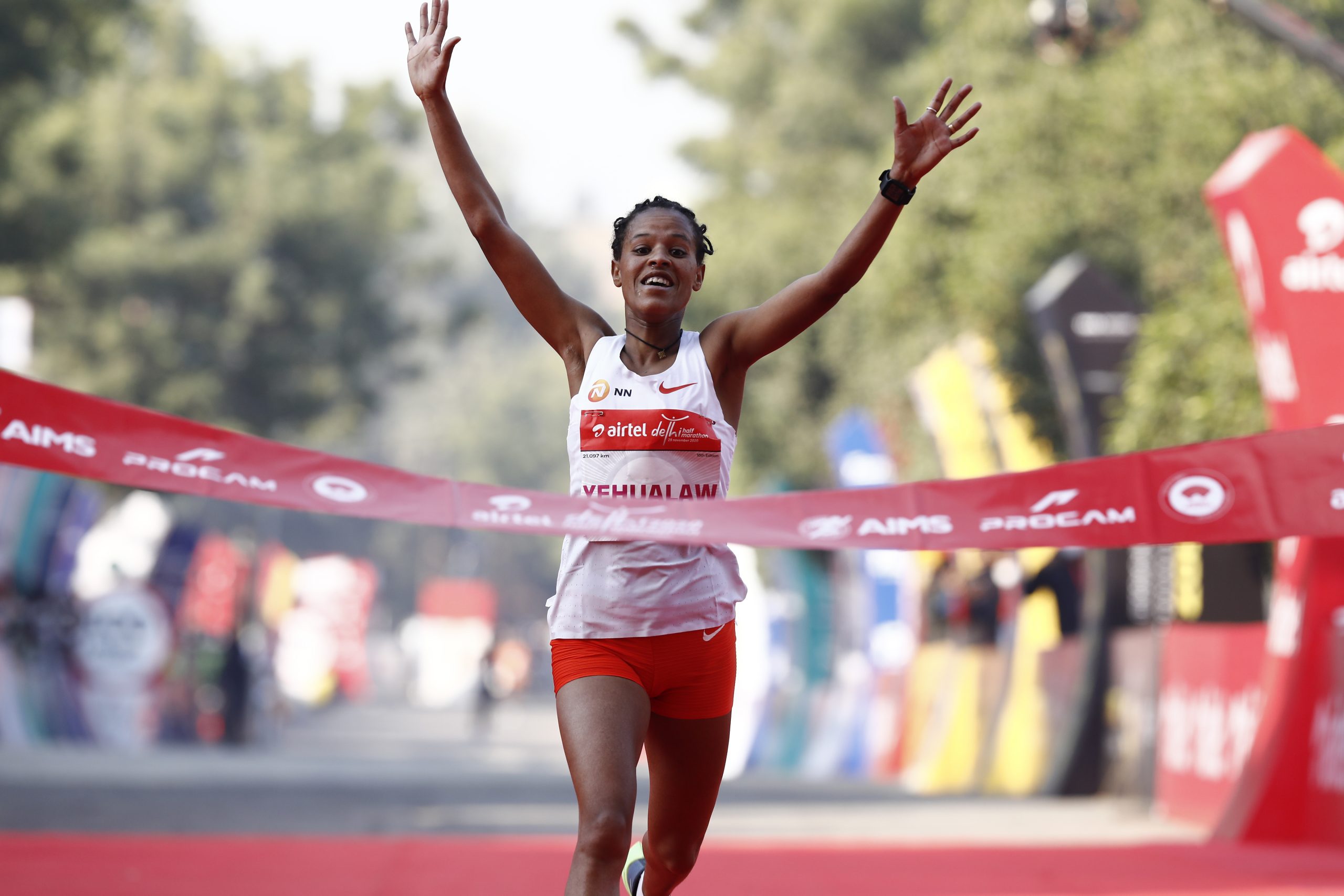 Ethiopia’s Yalemzerf Yehualaw produced a stunning run over in the 2020 Airtel Delhi Half Marathon, a World Athletics Gold Label Road Race. Yehaulaw clocked the second-fastest
women’s time ever over the distance when she crossed the line in 64:46.

The 21-year-old, who had to settle for third at the World Athletics Half Marathon Championships last month when she slipped around 80 metres before the finish line, bounced back well to take the $27,000 first prize and an additional $10,000 as an event record bonus.

In the men’s race, the event record – with the course having been changed significantly from previous years – also fell when Amdework Walelegn outsprinted his Ethiopian compatriot and two-time defending champion Andamlak Belihu to win in 58:53, the latter coming home in
58:54 and just missing out on an unprecedented third title.

A blistering pace from the gun was set in the women’s race by the Kenyan male pacemaker Alex Kibarus and several of the elite field was quickly dropped.

World marathon record holder and recent London Marathon winner Kosgei was forced to drop out midway through the eighth kilometre, holding her leg as she limped to the side of the road.

A kilometre later, Gemechu also started to suffer and lost contact with the leaders although she hung on to eventually finish fifth.

Chepngetich, Cheptai, Yehualaw and Yeshaneh went through 10km together in 30:49 as a thrilling race started to take shape. Cheptai was the next to fall away, becoming detached in the 12th kilometre with the remaining trio going through 15km in 46:15.

With just three kilometres to go, and within the space of a few hundred metres, first Chepngetich and then Yeshaneh found themselves unable to stay with the pace.

However, Yehualaw continued to follow Kibarus, and once he dropped out with two kilometres to go it was just a question of how much she would take off Gemechu’s 2019 course record of 66:00.

In the end, she improved the mark by more than a minute, aided by a strong run over the final quarter of the race.

Yehualaw won in 64:46 but Chepngetich also ran the race of her life to finish in a personal best of 65:06 and move up to equal-sixth on the world all-time list.

“My training since the world championships told me that maybe I could break the course record as I ran 65:19 there, but this was more than I expected, and I hoped for a win here after just losing by a second a year ago,” said Yehualaw.

“My plan was to push hard with two kilometres to go and that helped my fast time, and it was also very nice weather,” she added, with early morning temperatures in Delhi around 12-14 degrees Celsius.

The main pacemaker, Uganda’s Abel Sikowo, continued to forge ahead and passed 8km 22:17 and then 10km in 27:50, with eight men still directly in the wake of Sikowo who was doing an admirable job in keeping the tempo high and sub-59 times definitely in sight.

Just after 12km Sikowo dropped out and Belihu, along with Kenya’s Leonard Barsoton, dictated matters at the front for the next two kilometres although, as he was later to admit, this decision might have cost the defending champion dearly in the later stages of the race.

Eight men were still in contention at 15km, which was passed in 42:00. By 18km the leading group had slimmed just slightly to six men: the Ethiopian quartet of Belihu, Walelegn, 2017 and 2019 world 5000m champion Muktar Edris who was making his competitive debut over the distance, Tesfahun Akalnew, Barsoton, and Uganda’s Stephen Kissa.

Akalnew started to falter shortly afterward and with two kilometres to go, Edris and Barsoton also started to drop off the back of the group as their challenge for a place on the podium began to evaporate.

Belihu, Walelegn, and Kissa passed the 20km checkpoint in 55:59, and just a hundred or so metres later, Walelegn threw down the gauntlet.

However, Kissa was still full of running and darted between the two Ethiopians with 500m to go and held the lead for the next 300 metres before Walelegn found another gear and passed the Ugandan on his right as he sprinted for the line.

Walelegn finished in 58:53, the third-fastest time of the year and an event record by 13 seconds as well as a personal best by 15 seconds. Belihu was just one second in arrears and Kissa two seconds further back, both men also setting personal bests.

“I had a few bad patches but in the final kilometre I felt strong. I was second in Delhi in 2018 and this is a much faster course which has less sharp turns,” commented Walelegn, reflected on the new circuit which incorporated two six-kilometre loops.

“I have to be happy as I ran a personal best. After the pacemaker dropped out I pushed the pace but I think this might have left me with a bit less energy when we sprinted in the last kilometre,” reflected Belihu, who just fell short in his bid to be the first three-time winner in Delhi.

In fourth place Edris ran 59:04, the second fastest debut over the distance ever, while Avinash Sable smashed the Indian record by more than three minutes when he ran 60:30 in tenth place.

*For more information about the Airtel Delhi Half Marathon 2020, a World Athletics Gold
Label Road Race, the website of the eventis:www.airteldelhihalfmarathon.procam.in.