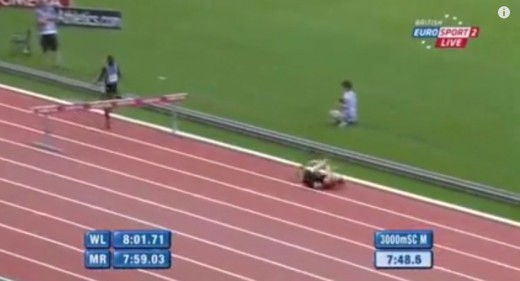 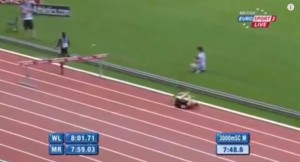 On Independence Day, American 3,000m steeplechase runner Evan Jager ran the race of his life during the Areva Diamond League Meet in Paris, France. He fell down too. And that crash kept him from running under the seemingly improbable barrier of 8:00.00. He ran 8:00.45. Until the late stage fall, it was surely going to happen.

His previous best was 8:04.71 from Brussels 2014, run 10 months earlier. That time was also the American record, but nearly five seconds slower is eons away from sub-eight, but Jager was there yesterday. He stumbled and fell to the track and rolled before getting up. In the process, he relinquished the lead to Kenyan Jairus Birech, who happens to be the fastest active steeplechase runner in the world right now. He finished in 7:58.83.

Jager had approximately a two second lead on Birech before the fall. It was a cruel turn of events. When asked about his American record Jager told Athletics Illustrated, “Honestly, I’m more disappointed that I fell and missed out on a chance to break eight minutes and win a Diamond League race than I am happy about breaking the American Record.”

“Going into the race, all I was thinking about doing was getting out hard and right behind Birech (who I assumed would go out behind the rabbits) and try to hang with him as long as I could. I really wanted to put myself out there early on in the race to test my body and see what I was capable of. I didn’t want to think about time at all because that just gives you one more thing to worry about while racing and I didn’t want to have that extra pressure.”

The world record is 7:53.63 held by Saif Saeed Shaheen, the former Kenyan who now calls Qatar home. Jager has now run the 43rd fastest time in history, behind only 12 men. Twenty-two of those times that are faster than Jager’s were run by two men, 11 each by Shaheen (previously Steven Cherono) and Paul Kipsiele Koech.  Birech ran the 27th fastest time yesterday. In 1997 Kenyan Moses Kiptanui ran what was the second fastest time in the world 7:56.16, which is currently the 8th fastest. Jager was headed to a performance in that range before his fall.

Jager is the real deal.

Championship races do not always produce the fastest times as athletes are racing for medals and will often race tactically and change pace throughout their race or run slow and wait until the final sprint – if they have the ability to sprint. For example during the 2012 London Olympics Jager finished sixth in the time of 8:23.87. The winning time was by Kenyan Ezekiel Kemboi with the time of 8:18.56. The Olympic record is owned by Kenyan Julius Kariuki from the 1988 Seoul Games, where he finished in 8:05.51.

“I definitely think I can break eight minutes. I think that if I hadn’t fallen I would have been able to run about 7:57.xx. I think I can still squeeze a little more fitness out of my body before the end of the season, but I’m not really sure what the rest of the season looks like as far as my schedule, outside of the World Championships, so we’ll have to wait and see if I have another opportunity to run faster,” shared Jager.

If Jager can surge and sprint in the middle of a 3,000m steeplechase he has as much chance to medal as anyone does, during the 2015 IAAF World Track and Field Championships this August as well as the 2016 Rio Olympic Games.

Jager is a lone bright spot in non-African 3,000m steeplechase. Of the top-100 times 91 are held by Kenyans or former Kenyans (re: Saif Saeed Shaheen). In the previous seven Olympics, Kenyans have won 16 of 21 medals, two of three each in London, Beijing, Sydney, Atlanta and Seoul and all three medals in both the Athens and Barcelona games.

The 2015 IAAF World Track and Field Championships take place from August 22 to the 30th in Beijing, China.