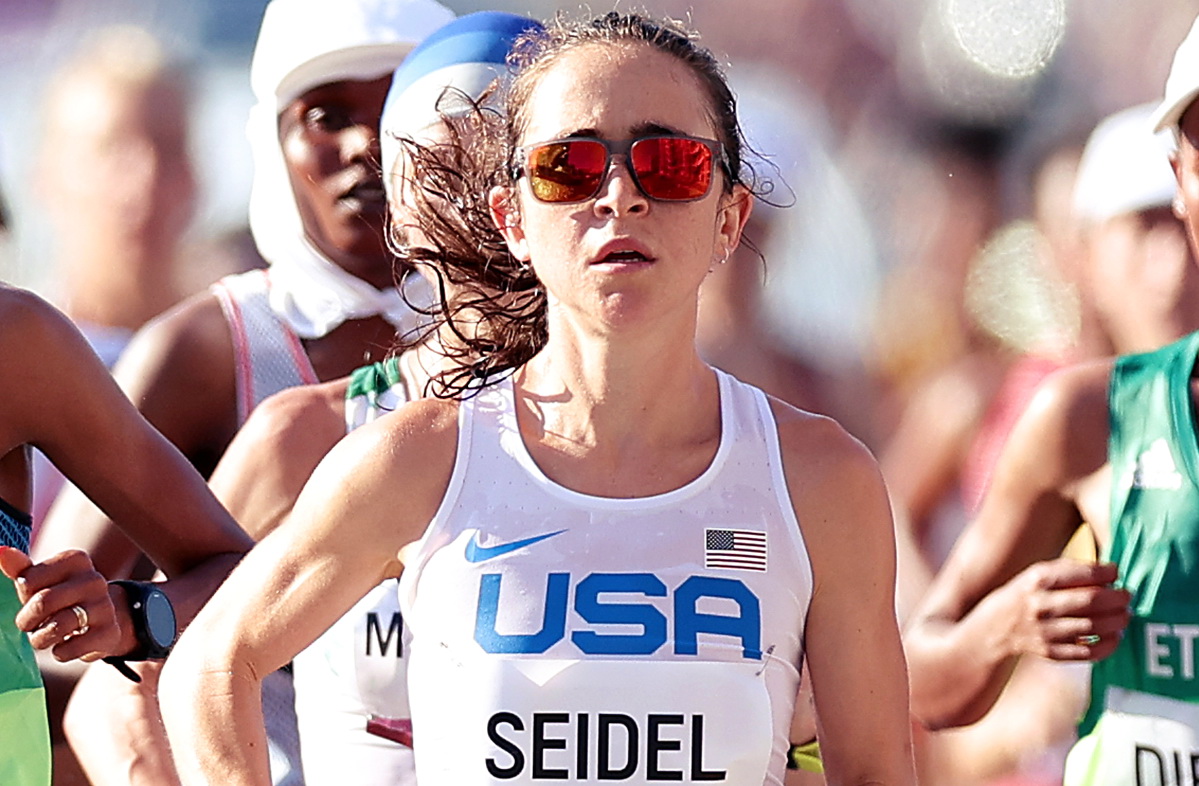 Getting a hold of Molly Seidel after her Olympic marathon performance was a marathon in itself (not quite). But the media-specific to athletics as well as the general media are all clamoring to speak with the hot topic of the day, that being Seidel and her shiny new bronze medal from the Tokyo Olympic Games. When we did chat, she was humble, thankful, and still processing whatever just happened to her on the streets of Sapporo.

Finishing in the bronze medal position (2:27:46) for the American didn’t just surprise the many athletics fans around the world, the outcome surprised Seidel too. Anyone watching the event live was likely waiting for her to hit the proverbial wall at the 20-mile mark (32kms) or after. Even she was wondering when world record holders Peres Jepchirchir and Brigid Kosgei were going to “drop me like a bad habit”. It didn’t come to pass and as it turned out the Wisconsin native and four-time NCAA champion finished just seconds behind silver medallist Kosgei, who owns a personal best that is more than 11 minutes faster than Seidel’s.

“It takes 10 years to become an overnight success.” – marathoners

Seidel qualified for the Olympic Games by running a 2:27:31 during the Trials that took place in Atlanta, GA. She finished second behind Aliphine Tuliamuk. The time is fast enough where fans could expect Seidel to finish in the top-20 or perhaps top-10, but not third. Perhaps much had to do with heat acclimatization.

“The workouts there, near the end of the camp, I was getting my kilometre repetitions (16 x 1km) down to about 3:10 off one-minute rest. So, I knew leaving there that I was fit and ready for the Olympics,” added Seidel.

“Saying that, nothing I was doing was that glamorous or anything. It was more about high mileage and consistency than anything.”

Also, the pacing during the marathon worked in her favour. The race, as she said, “didn’t go out too fast.”

Humble. And maybe, but you cannot fake a marathon. However, different conditions affect athletes in specific and individual ways. Preparation is the key. For example, Canada’s top-two marathon runners, Malindi Elmore (9th) and Natasha Wodak (13th) trained together in even hotter conditions in Kelowna, BC. Meanwhile, at least 15 women of 89 starters dropped out of the race. Salpeter and a few others finished but barely, staggering in. It’s an Olympic thing to finish your race if you can, regardless of performance.

Seidel’s performance brought North Americans out of their seats to be sure. It will resonate as an indelible moment on the American Olympic landscape and history books. The US didn’t have the athletics portion of an Olympics that they anticipated, botching relay baton handoffs and not delivering in some of the sprints. On the other hand, there were some bright lights too. For example, Athing Mu, with her incredible 800m gold medal performance. Allyson Felix’s swan song. She went out on a positive note. And Seidel, kept Americans fixated on the marathon for over two hours.

The first phone call that Seidel made after the bronze medal performance was to her parents. Asked if anyone cried on the call she said, “yes, I did, three times.”

Asked how it feels to be an Olympic marathon bronze medallist, she said, “it feels cool. It is a very nice experience, but it doesn’t change who I am. I guess it may change the way other people see me, but I don’t really feel any different, other than it was very nice to have accomplished it.”

Asked if she is going to seek a fast marathon course, to see what she can do in more ideal marathon conditions, she said, “I am not that worried about getting a new shiny personal record. But, I will do a major (World Marathon Majors series) probably this fall. I have to think about that and plan. What is most important to me is to recover from this race and take the time to plan the next event.”

And Seidel, likely off to another interview had just finished a radio talk show. It’s busy times for someone who accomplished what was previously not within anyone’s expectations, even hers. Perhaps when she finally processes the bronze, she will line up and hit a new shiny personal best at a major marathon this autumn. No pressure or anything, she just hung with the all-time fastest half marathon and marathon runners of all-time in Jepchirchir and Kosgei for 42.195kms.