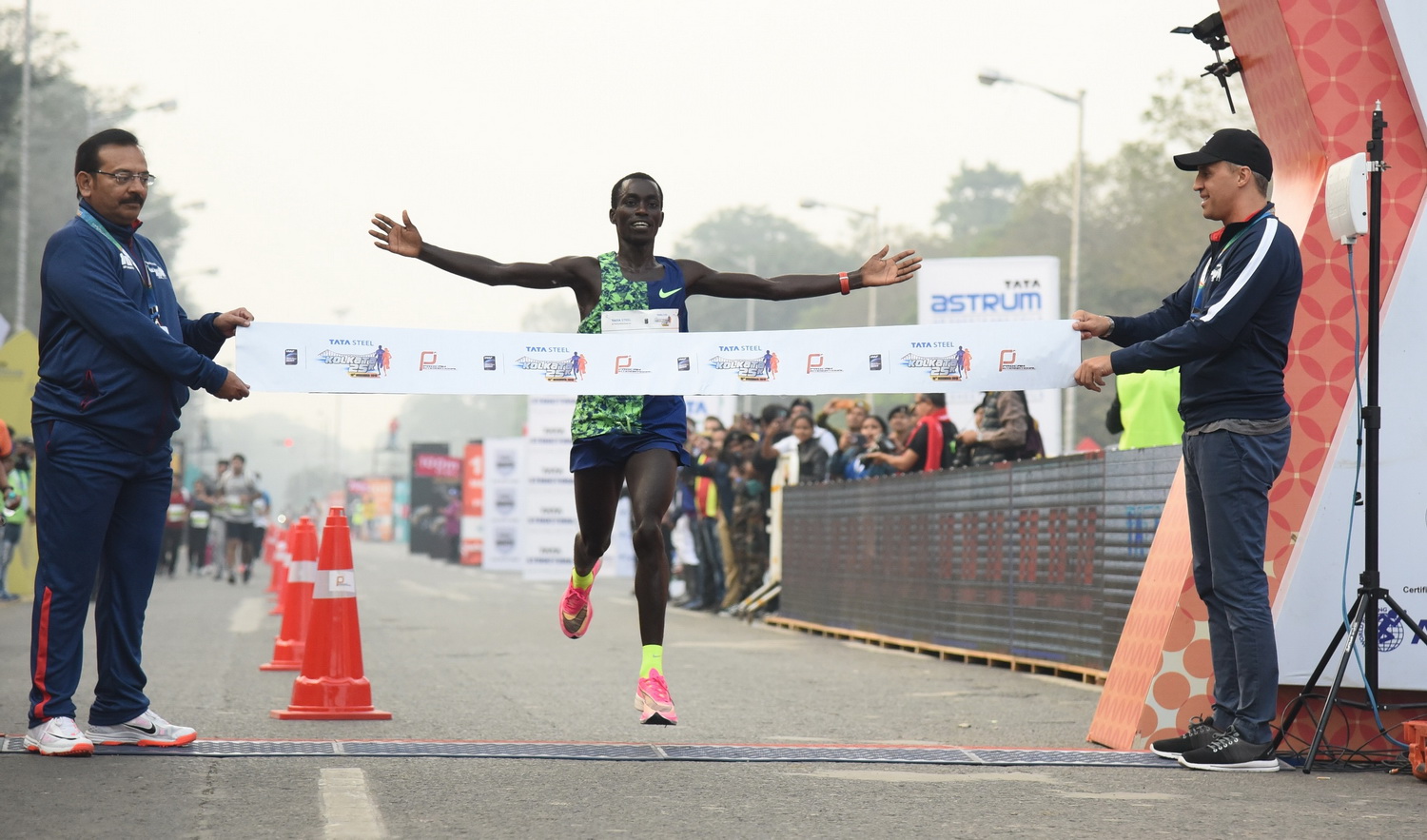 Kenya’s Leonard Barsoton and Ethiopia’s Guteni Shone ripped up the record book at the Tata Steel Kolkata 25K 2019 as the pair set new event records for the World Athletics Silver Label Road Race – the only 25km race in the world with such a distinction – on Sunday (15).

Barsoton, the 2017 World Cross Country Championships silver medallist, crossed the line in 1:13.:05 to take 43 seconds off the event record set by Ethiopia’s Kenenisa Bekele in 2017 while Shone clocked 1:22:09 to win by more than a minute and took almost four minutes off the event record of 1:26:01 set by her compatriot Degitu Azimeraw two years ago.
Both of the TSK25K 2019 winning times rank just outside the top 10 all-time marks for the 25km distance.

Despite the Ethiopian pair of Betesfa Getahun and Bayelign Yegsaw surging and pushing hard over the next five kilometres the same six – Barsoton, Getahun, Yegsaw, Uganda’s Felix Chemonges, Ethiopia’s Dagnachew Adere and Tanzania’s Faraja Damasi – were still more-or-less together as 20km was passed in 59:05; but with four kilometres to go
Barsoton pushed hard for home and the move proved to be decisive.

“It was a tough race and a tough course, and it was a close competition until the 20K mark, after which I broke free from the pack. I have been training hard this year, leading a disciplined life: sleeping early, rising early and training hard,” reflected Barsoton, whose previous credentials also include a half marathon personal best of 59:09 in Valencia in October.

“I had planned to push hard from 20km but looking at the other runners I decided to wait a little bit and then went at 21lm. But to beat a record of Bekele’s is so special. I’m very excited.

“Next year, for sure I will make my marathon debut, but I don’t know where yet. However, I think I can run 2:03, a crazy time. If I can beat Bekele’s record here, I can run that sort of crazy time,” added Barsoton.

Bekele’s brother Tariku Bekele drifted off the back of the leading pack just after 13 kilometres and eventually finished 10th in 1:15:53 while Kenya’s 2009 and 2011 world marathon champion Abel Kirui, a late addition to the race, was a distant 11th in 1:18.08.
In contrast to the way the men’s race unfolded, Shone was out on her own
over the last 10 kilometres.

After a group of seven women had passed 10km in 33:37, Shone started to increase the tempo and by the halfway point just had her training partner Desi Jisa for company. The Ethiopian-born Bahraini hung on doggedly for another couple of kilometres but by 15km, which Shone passed in 50:03, the 2019 Sevilla Marathon winner was starting to pull away from her rival.

Jisa hung on to take second in 1:23:32 with another Ethiopian-born Bahraini, Tejitu Daba, exactly one minute further back in third. The leading five women were inside the former TSK25K women’s event record of Azimeraw. “I have practiced (trained) very hard throughout the year and it is yielding results now,” reflected Shone.

“The temperature was a little hot and since the running was through the city there were many turns and bents to make the race tough. Moreover, you did not know what kind of surface to expect next, so you had to keep guessing. All of that made the course challenging and worth the run,” she added.