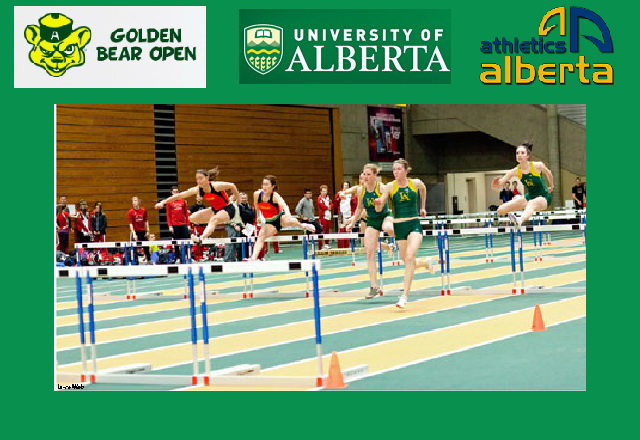 Recent changes with the University of Alberta varsity cross country and track and field programs include their partnership with the Canadian Athletics Coaching Centre, details are discussed below however, the annual Golden Bear Open Track & Field competition is happening this weekend – January 18th to 20th at the Universiade Pavilion at the University of Alberta, in Edmonton. This is the largest indoor competition by numbers in Western Canada. This year they are gearing up for their largest, most dynamic event.

Christopher Kelsall: I understand that there have been some changes in the relationship between the University of Alberta varsity cross-country and track and field team and their partnership with the Canadian Athletics Coaching Centre, yes?

Sean Baynton: Yes, July first of 2012 the Canadian Athletics Coaching Centre and the Golden Bears/Pandas Track and Field programs joined forces to enrich the experience of track and field participants in Edmonton.

CK: Can you tell me about the Golden Bear indoor track and field meet that you have coming up?

SB: This year the GBO has undergone a number of changes to make it a more fan friendly competition with dedicated blocks of time towards collegiate, high school and youth competition. Accordingly, we have the largest GBO ever with over 900 athletes competing at all levels of sport. Unique to this year, Athletics Alberta is utilizing the GBO as a talent Identification opportunity for the 2013 Canada Games. To support this objective Canadian Athletics Coaching Centre, the University of Alberta Track and Field program and Athletics Alberta will host a Lessons from London banquet and panel featuring Derek Evely, Les Gramantik, Justin Warner, Nikita Holder.

CK: That is a solid panel. Where in town is the CACC located? Is it easy for people to find?

SB: The CACC is located on South Campus, within the Foote Field Complex at the University of Alberta. It is very easy to find.

CK: Apparently you have some very strong runners scheduled to compete including Tyler Smith – who ran 800m in 1:47 while in grade 11. Who else is competing?

SB: We do have a solid field that we are excited about, unfortunately, due to sickness, Tyler has had to pull out. Despite Tyler’s absence we still have a field that can haul.

Beyond the men’s 1000 meter race, we also have a number of exciting races including a men’s 60 meter, a strong collegiate women’s 60 meter and 60 meter hurdles. The collegiate 4 x 200m also features the top western Canadian teams.

CK: What times are you expecting to see in each of those events? Who is going to win the showdown of the western teams in the 4 x 200?

SB: The Men’s 1000m Invitational event is going after CIS Standard – both Felix Antoine Lapointe (Coach at Laval) and Dave Scott-Thomas (Coach at Guelph) have asked for this as the minimum. Our rabbit is going through 500m with the intent of pulling the field to sub-2:22-2:23 pace. In DST’s words, “they are all here to haul”.  Anything can happen in the 4×2’s which is what makes it exciting. Each team has a shot of winning and we look forward to it being settled on the track.

CK: Why is the Golden Bear attracting such a quality field?

SB: There are a couple of reasons for the quality of the field this year. The first is that we are holding the 2013 CIS (Canadian InterUniversity Sports) Championships, the second is that we have one of the best facilities in the country to run fast in the speed/power events. The University of Alberta is committed to supporting multiple communities such as the CIS and programs who are committed to making a positive impact in the sport of track and field. The University of Alberta’s goal is to showcase the CIS to the Edmonton community.