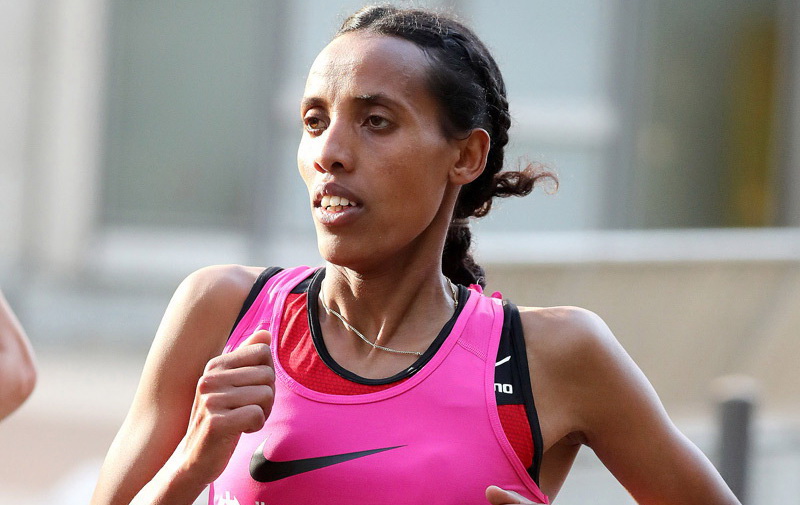 Fate Tola missed victory at the Mainova Frankfurt Marathon last year by a hair’s breadth. The 2016 runner-up will be back this time to the race where she ran her first marathon as a German citizen, becoming the fourth fastest ever on the national rankings with her time of 2:25:42 and winning the national title with that second place. Among her rivals on October 29 will be her former Ethiopian compatriot Abebech Afewok and Sara Hall of the USA.

The Mainova Frankfurt Marathon is an IAAF Gold Label race with up to 15,000 runners. Entries are still accepted at: www.frankfurt-marathon.com

Fate Tola already has one marathon victory to her credit this year: the 29-year-old won the Hanover title in 2:27:48 in April. Her best time so far was achieved as an Ethiopian with 2:25:14 in 2012. The World Championships in London failed to live up to expectations as a problem with her left hamstring hampered her, leaving Fate Tola to finish 22nd in 2:33:39. Her aim in Frankfurt is to run considerably faster and show her true form.

Winning a place on the podium in the Mainova Frankfurt Marathon will be a tough challenge for Tola. Following the World Championships she has had just two and a half months to prepare for her third marathon of the year. Just as significant is that the competition looks just as tough as ever on October 29.

Among those joining the elite women’s field is Abebech Afewok. The 26-year-old Ethiopian has a marathon win already this year: she triumphed in Australia’s Gold Coast event at the beginning of July, running 2:25:34. As with Frankfurt, this race also has IAAF Gold Label status. Her personal best of 2:23:33 was set in Dubai in 2015. She can be relied upon for consistent performances with all but three of her 14 marathons run under 2:30. For good measure, seven of them have been under 2:26 for Abebech, who has also won titles in Houston and Rotterdam.

Another entrant, Merima Mohammed of Bahrain hasn’t been in her best form of 2:23:06 recently but Sara Hall of the USA certainly proved her capabilities with sixth place in the high quality Tokyo Marathon in February. The 34-year-old ran 2:28:26 to break 2:30 for the first time. This will be her debut at a top level German Marathon. On Frankfurt’s renowned fast course the partner of the former world class marathoner Ryan Hall (2:04:58 personal best in Boston) will be aiming to develop still further. Also a contender is Katharina Heinig, running in her home city, who improved to 2:28:34 in Berlin last year but trailed in 39th at the World Championships.

For the first time a two-day European Running Business Conference will be held in Frankfurt prior to the Mainova Frankfurt Marathon. This is a new initiative by European Athletics in cooperation with the Frankfurt organisers. The aim is to help road race organisers improve their standards and provide advice on various aspects. Participants are invited to attend the Mainova Frankfurt Marathon the following day. Registration to attend the conference remains open until 26 October and prospective attendees can register here: https://registration.mylaps.com/business-conference