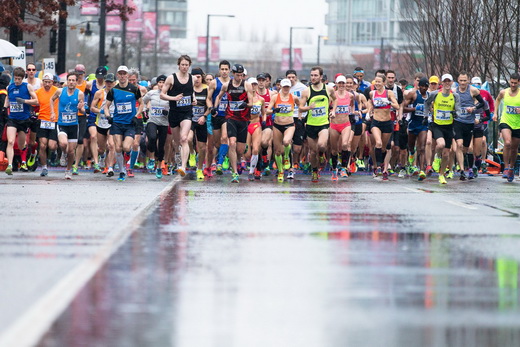 The “First Half” Half Marathon is happening this Sunday. This event is one of the most popular half marathons in Canada as it sells out each year well in advance. It is a favourite of local elite athletes, some who have competed to represent Canada in international competition including the Olympic Games.

While many medium and large-sized road races throughout North America are experiencing reduced participation, the Pacific Road Runners running club have enjoyed repeat sell-outs, within hours of the registrations opening up online.

There is always a very competitive masters field for the event. Interestingly Vancouver’s Betty Jean-McHugh owns 16 of the top-20 all-time age-graded performances. Eleven years ago McHugh ran as a 70-year-old under two hours (1:56:47) – 95.96% performance.

BC Athletics’ press release about the event is below. Anyone wishing to do this race, may find transferable entries online.

The 28th edition of the Pacific Road Runners “First Half” Half Marathon on February 5th will see Olympians and Pan Am Games medallists up against international competition in the second race in the 2017 BC Super Series, a collaboration between BC Athletics and 12 of BC’s best road races. Keen competition is anticipated in both the men’s and women’s races, with the women’s event record under threat if conditions are favourable.

Headlining the women’s field is a quintet of Canadian talent.

Rachel Cliff (Vancouver, BC) ran a 5000m qualifying time for Rio, but was unfortunate not to be selected to the team. She was the Vancouver Sun Run champion in 2014.

Hilary Stellingwerff (Victoria, BC) did represent Canada in Rio at the 1500m. Now retired from track competition, she is turning her attention to the roads.

Emily Setlack (Cold Lake, AB) was the 2016 Canadian Half Marathon Champion. Melanie Myrand (Montreal, QC) has the Quebec provincial half marathon record of 1:14:51 as her goal.

Breaking the event record of 1:12:47, set by Tina Connelly in 2004 would result in a $1500 bonus for the winner. Connelly will be back as a masters competitor, where the race will feature 2016 Portland Marathon Champion Kate Landau (Tacoma, WA) and 2015 Pan Am Games marathoner Catherine Watkins (Vancouver, BC).

Dylan Wykes (Vancouver, BC), who set the men’s record of 1:04:21 in 2012 prior to the London Olympics, returns in an attempt to win the race for a record fourth time. His competition includes his Mile2Marathon Coaching colleagues Rob Watson (Vancouver, BC), a two time former winner and runner-up last year; and Kevin Coffey (Vancouver, BC) who finished third last year. Challenges to the local dominance will come in the form of Norberto Abad (Mexico) who has represented his country in the World Mountain Running Championships on multiple occasions; and Brian Masterson (Seattle, WA) 2016 Bellingham Bay Half Marathon Champion.

The oldest competitors will be 82 year olds’ Gwen McFarlan from Richmond, who has set a number of world age best performances; and Roger Roufosse from Surrey.

For many the “First Half” has become an annual tradition. Henny Coates of Vancouver has completed the race 23 times, and three time winner and former Olympian Art Boileau has completed 20 First Halfs. “Everyone has their personal goals and motivations for doing the race”, says this year’s race director Terry Bushnell. “The goal of the Pacific Road Runners is to provide a top class competition for runners of all abilities, and use the proceeds to benefit the local community”.

Proceeds from the event benefit Variety – The Children’s Charity. The 51st Show of Hearts Telethon takes place on February 12. This year’s “First Half” contribution will take total donations past $750,000 since 1995.

Starting and finishing at the Roundhouse Community Centre, the route includes a circuit of the Stanley Park seawall. The race gets underway at 8:30am, with a loop around BC Place, before heading out to Stanley Park. The winners will return to the Roundhouse shortly after 9:30am.

The race sold out in under 72 hours last November, and has attracted entrants from seven Provinces and seven States, as well as from Australia, Brazil, Ireland and Mexico.