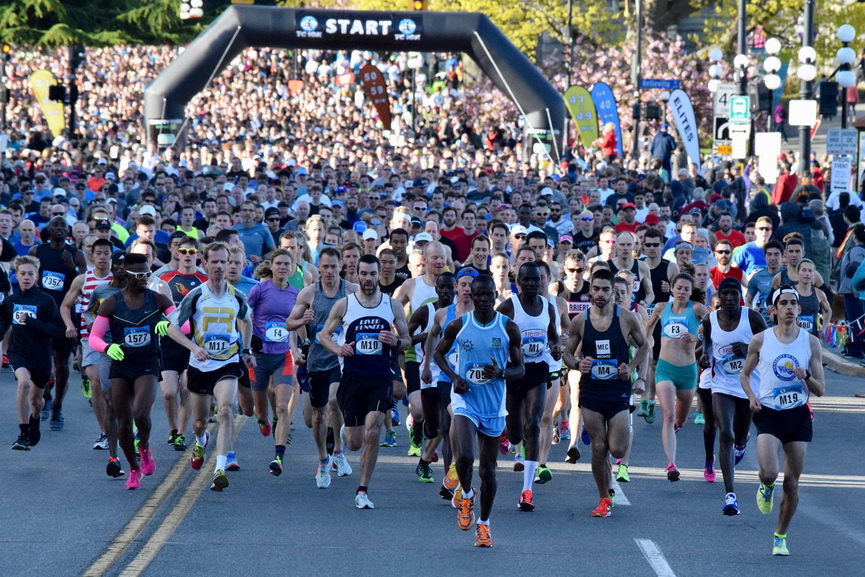 For road runners on the west coast of Canada, there are several noteworthy races coming up including the Vancouver Sun Run, TC10K, Steveston Icebreaker 8K, Bazan Bay 5K and the Vancouver Marathon, half-marathon and 8K weekend. Additionally, the Bloomsday 12K (not too far away) in Spokane, Washington will take place. All of these races are happening during a 21-day stretch from Sunday, April 10 to Sunday, May 1.

On April 10, the Bazan Bay 5K on Vancouver Island is happening just north of Victoria in Sidney. The course is lightening fast, with one turn — the turnaround at half way — and a dead-flat course. If the wind is calm, this is definitely a personal best course. Course records are 14:12 by Geoff Martinson and 15:48 by Malindi Elmore. The race starts at the civilized hour of 11:00 AM. The race venue is conveniently located near the ferry terminal and airport.

Put on by Team West Coast, this race is the finale event in the Vancouver Island Race Series.

Steveston Icebreaker 8K in Richmond, BC (Greater Vancouver) is on the same day. The Kajaks Running Club and Richmond Track & Field Club organize this flat and fast BC Super Series event. For concerns about the coronavirus, even though many provincial restrictions have been lifted, the start will be run with two-minute waves.

This Sunday is the 22nd running of this race.

The Vancouver Sun Run, Canada’s largest 10K race, and one of the largest in North America takes place in downtown Vancouver with anywhere from 30,000 to over 40,000 starters, depending on the year. This course is so fast, results do not count for records or standards. The downhill start will get all runners off on the right foot. If interested in running a new personal best in the 1K or 1-mile event, on the way to a 10K finish. This is it.

The race is so big that the start happens in waves. There is no sense in running the virtual version (which is available), as it will be very difficult to find a course that is as fast.

The field is typically stacked with Western Canada’s fastest distance runners, many Olympians and an international field.

Times Colonist 10K or TC10K is the little brother of the Vancouver Sun Run. Where 6,000 to 8,000 runners take part in this event. Unfortunately, the Sun Run and the TC10K happen on the same day. Typically, they do not and most years athletes can take in three races in three weeks in a row.

The TC10K does benefit from offering a certified course for records and standards. It is a fast course, with long downhills interspersed with shorter up hills. The run takes place on the streets of Victoria’s downtown, Fairfield and James Bay neighourhoods under the beautiful canopy of cherry blossoms. Should the sun shine, the snow-capped Olympic mountain range offers a scenic backdrop, as do the stately building at the start and finish area of the Inner Harbour.

Several charities benefit from the race, as does the Victoria Track Classic, which is a stop in the Athletics Canada National Track Tour.

The Vancouver Marathon, half-marathon and 8K are back on. The courses are picturesque, and like the Sun Run encompasses much of downtown. The marathon includes Stanley Park as well as the Kitsilano neighourbood. The half-marathon is considered fast. In all, at least 18,000 people should take to the streets of Vancouver.

This year’s event is the 50th running.

Ranked by Forbes, CNN, and USA Today as one of the top destination marathons in the world. Vancouver is now the largest marathon race in Canada.

Like the conflict between the Vancouver Sun Run and Victoria TC10K, the Bloomsday 12K happens the same day as the Vancouver Marathon, Sunday, May 1. The 2022 edition is the 46th running of the event. Over 60,000 people took in this race during the 1996 edition. Since 1986, there has been 38,000 or more every year. Also known as the Lilac Bloomsday Run, this race is one of the most popular in North America. It takes place just south of the Canadian border in Spokane, WA.

See the BC Athletics calendar here>>