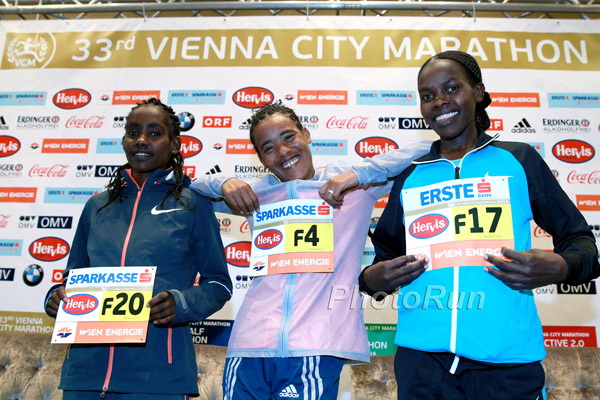 In recent years the Vienna City Marathon has developed strongly regarding the international significance of the race. Superstars Haile Gebrselassie and Paula Radcliffe competed in the half marathon staged parallel to the marathon, overall entry figures rose by one third within five years to more than 42,000 and the men’s course record stands at a world-class time of 2:05:41. However there is one record that looks a bit out of date: The women’s course record of 2:23:47 is from 2000. It was Italy’s Maura Viceconte who ran this time in Vienna. Organizers hope that the women’s winner of the 33rd edition of the Vienna City Marathon will at least come near to the mark or may be finally break it on Sunday. Five women are targeting times of sub 2:25 in this IAAF Gold Label Road Race which will be shown live and worldwide on the internet at: www.vienna-marathon.com

„For me it is more important to achieve a personal best than to win. However if I win the race with a good time it will be an additional bonus,“ said Fantu Jimma during today’s women’s elite press conference in Vienna. The Ethiopian has a personal best of 2:26:14 and this year already came close to it: She was third in Xiamen in January with 2:26:53. However she plans to run quite a bit faster on Sunday: „I am well prepared and I know that Vienna usually offers very good conditions for racing. So my aim is to run 2:23.“

There are four other women in the race who will probably follow that pace: Fellow-Ethiopian Guteni Shone is the fastest in the field with a personal best of 2:23:32. She ran this time in Houston last year. While she had not arrived in Vienna in time for the press conference Doris Changeiywo looked ahead optimistically to her second marathon. The Kenyan won her debut marathon in Singapore in difficult weather conditions in December, clocking 2:44:26. „I found it quite tough to adapt to the marathon after running cross country and track before. In Singapore I just wanted to finish, nothing else. It was very humid there. Now in Vienna it is about running much faster. I will go with the Ethiopians on Sunday,“ said Doris Changeiywo, who features a half marathon PB of 68:49.

While Meseret Kitata, who has a PB of 2:27:17, also indicated that she wants to run a sub 2:25 pace fellow-Ethiopian Ruti Aga is keen on a fast debut. The 22 year-old improved to 68:09 in the half marathon in Houston this year and recently won the Lisbon Half Marathon with 69:19. „I know that the climate here is good for marathon running. And of course Haile Gebrselassie ran in Vienna – so that is why I decided to run my debut here,“ said Ruti Aga.

Organizers of the Vienna City Marathon encourage their runners to support official charities during Sunday’s race. Charity running has been established in Austria’s biggest sporting event during the past few years. And in 2015 a total of 55,000 Euros were donated with the help of the marathon runners. On Sunday organizers hope that a similar amount will be donated. Therefore they have introduced a very simply system to support a chosen charity.

15 acknowledged charity organizations are presented as official partners on the website of the Vienna City Marathon (www.vienna-marathon.com). Runners can choose any of these charities, register and then ask friends, relatives or colleagues to donate to this charity. By making a donation through this system the total amount collected for each charity is visible on the website of the Vienna Marathon City and is constantly updated.

„This system is extraordinary efficient. We do not need to invest money to establish a charity event. We just connect our event with the willingness of many of our runners to help,“ said Race Director Wolfgang Konrad, who pointed out that sponsors and partners of the Vienna City Marathon support the project.