World record holders Joshua Cheptegei and Sifan Hassan, Diamond League champions Dina Asher-Smith and Tom Walsh and local hero Gianmarco Tamberi are among those who will feature in the third Wanda Diamond League meeting of the season in Florence next week.

From 5000m world record holder Joshua Cheptegei to 100m title holder Dina Asher-Smith, next week’s Pietro Mennea Golden Gala in Florence will feature some of the very best athletes in the world.

With just a week to go until the third Wanda Diamond League meeting of the season, Florence unveiled star-studded entry lists on Thursday.

Cheptegei, who broke the world record at the Monaco Diamond League last year, begins his Diamond League title charge at the Italian meeting on June 10th. The Ugandan star will face a tough field which includes Norwegian prodigy Jakob Ingebrigtsen, who got early points on the board in the 1500m with victory in the season opener in Gateshead last month.

Asher-Smith, who also won in Gateshead to make a perfect start to her 100m title defence, will launch her 200m campaign in Florence against the likes of Dafne Schippers and Marie-Josée Ta Lou. Her fellow Brit Laura Muir is one of several superstars in the women’s 1500m line-up, which also features 2017 Diamond Trophy winner Faith Kipyegon and reigning champion Sifan Hassan.

There's just one week to go until #FlorenceDL 🇮🇹 and from the look of the entry lists, there are going to be some incredible battles both on the track and in the field 🙌 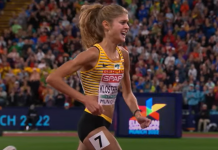