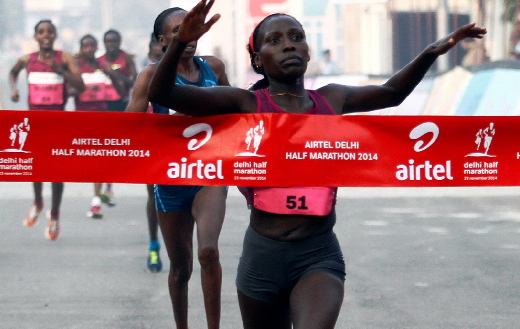 Florence Kiplagat will be running the Virgin London Marathon Sunday, April 23. She is seeking to lead throughout and to take the win.

Kiplagat, recently joined the first professionalised road running group, the NN Team, which includes other top-name athletes such as world record holder in the 5,000m and 10,000m Kenenisa Bekele of Ethiopia, Eliud Kipchoge, who is the third-fastest marathon runner all-time (behind Bekele), Abdi Nageeye (2:09:34 marathon best) and approximately 60 others.

Kiplagat, of the Kalenjin tribe and grew up near Marakwet. She is married to Moses Mosop, who has run the marathon as fast as 2:03:06 (Boston 2011). He is also a former Chicago Marathon course record holder.

They have a daughter named Asha.

Christopher Kelsall: You are now just days away from running in the Virgin London Marathon. How is the taper going and how was your latest training cycle?

Florence Kiplagat: Preparation is so far is good; the last two weeks have been fast, faster than the weeks before the Chicago marathon.  My last bit of training has to do with more speed trainings; you have to be ready and fast, prepared for fast races. The training has gone very well in my preparations before London.

CK: I understand that you didn’t pursue a running career until late in your teen years, when you found out that you could possibly earn a scholarship to a NCAA school. Did you run as a child a much?

FK: Yes that is right. I never did get a scholarship though. In 2006, I heard I didn’t get a scholarship; I had the feeling that they didn’t give me a chance. No, I only was playing football as a child, no, no, no, I didn’t run a lot.

Yes, of course, I ran to school, like everybody was that time, more than 2K that makes 4-to-5K a day. Everybody has to do that. That has made me strong, I believe.

FK: I don’t think that is possible. Maybe 62, but under 60 is not possible in my opinion. Only if they do it like sub-2-hour project now is trying.

CK: So you think possible with serious focus. The same question can be asked about the 10,000-metres. Alma Ayana ran that amazing 29:17 in Rio. Before she ran that time, did you think that level of a performance was possible? Do you think the times will get below 29?

FK: For Ayana it is possible, 28 is possible. I saw her in Rio, also the junior Letesenbet Gidey, she is super strong. I believe even for the junior that girl it should be possible for her.  I saw her in Kampala. Both Ayana and “junior” are very fast. So yes, below 29 is possible I think, especially for Ayana.

CK: Is Asha beginning to a show an interest in running?

FK: No, she is just playful kid. She is tough! When I tell her to run, she said no, I’m tired. She prefers to go by bike or play like boys do. She has no aptitude for running, I can see that. But you never know as I was also not a kid who runs that much, and now I am running on the highest level. She is good in school. In future, she will be a singer or a nurse. Let her grow like she wants. In about 10 years I will realise what she will be doing.

CK: Do you plan on racing in the IAAF World Track and Field Championships this year?

FK: Umm… I thinking about it. But in Kenya it is hard to get in the Kenyan team. I will try my best to run the 10,000 at the world champs.

CK: What does it mean to you personally to have the NN Group/NN Team formed to establish professionalised running?

FK: Now that a professional team has been formed, is a big step forward in the world of road running. It is the best! We never had that much sponsors or support. To support athletes is very good, also the upcoming athletes. I like it when running is and becomes more of a team sport, feeling being part of a team is the feeling of being a celebrity. You feel stronger in a team! I hope we will get even more supporters with this team.

CK: Will you be competing more in races that are organised by the NN Group, going-forward? If so, what races are you targeting in 2017?

FK:I wish to run if it fits in my program. Me, my coach and my management decide what the best is for me. If I can do something for the team running a NN competition, I will.

CK: How do you think the London Marathon will play out? Do you think there will be a fast start? What sort of tactics do you need to employ to perform at your best?

FK: I don’t know yet, because we are still waiting for the pace of the pacers. To me, I feel ok, but it is hard to predict how it will go. Every marathon is different. About the start, nobody wants to go slowly in the beginning, if the pace is too slow, then you waste the chance to win and to run a fast time. Best thing for me is to stay in front to control. When the pacers drop out I stay in front and move fast.