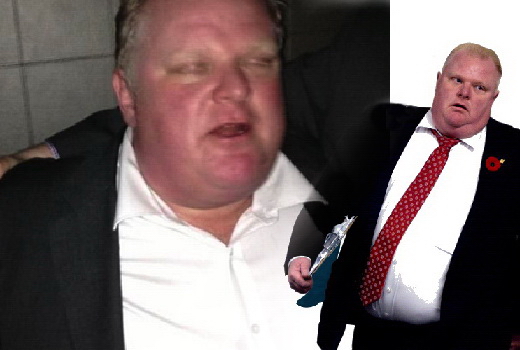 According to an anonymous tip provided by a person speaking on behalf of the Ford Motor Company F (NYSE), the auto manufacturer has sought a legal writ to order Mr. Rob Ford and Mr. Doug Ford., DBA “Ford Nation” to change their last name.

The supposed writ was dropped on the heels of the latest scandal surrounding the brother act, where during Toronto’s Canada Day celebrations (organized by the National Congress of Chinese Canadians) the latter Ford verbally attacked a shirtless Caucasian jogger and called him a racist. Ford 2.0 later recanted his definition of “racist” by saying, “You can be racist against people who have a drinking problem.” This statement left the celebrants scratching their heads. Was Doug Ford giving permission for people to be racist against people with drinking problems? Or was he making an illiterate statement? In light of the Fords’ public relations record, it was assumed that the latter Ford was likely making the latter sort of statement, so no real harm done.

“Either way, they are an utter disgrace to the name ‘Ford’,” said another Ford Motor Company spokesperson, who wished to remain anonymous. She continued, “He should be recalled like a Chevrolet.” Ironically, Rob Ford drives a Ford Escalade.

The former Ford (but not formerly a “Ford” yet) or the current Mayor, who is running for office again (so may soon be “former Mayor” also) was heckled out of the Canada Day Parade, which caused him to stamp off in a childish rage. “What was he expecting during the parade? This whole Ford Nation thing is a charade. They made it into a charade parade,” said Beth Whethausen, when asked about the facade.

Ford 2.0 said that Joe Killoran, the shirtless jogger, “was a bad killer.” Ford 2.0 was apparently confused by Killoran’s last name and profession as a teacher, so he again corrected himself by saying that “Killoshirt is a bad name,” then stumbled again as he nearly correctly referred to him as “Kill-and-ran,” perhaps related to the popular acronym taken from his name: Found On Road Dead. Finally settling on, “Killoran is a bad apple and a racist, shirtless, bad-apple-teaching, killer-jogger,” Ford 2.0 finished in apparent frothing, stammering confusion.

Mayor Rob Ford is known in the media as a comedy piñata. Jon Stewart, who hosts the Daily Show, a satirical review of the latest news, as well as Jimmy Kimmel, host of Jimmy Kimmel Live, a late-night talk show, have feasted on Rob Ford, often referring to him as “that crack-smoking Mayor.” Ford was a guest on Jimmy Kimmel Live, where he embarrassed himself on the show before receiving the first ever jay-walking ticket in Los Angeles City history, followed by secretly being filmed entertaining Jamaicans riffing in Jamaican patios, while wearing a leather sex suit complete with whip. He then checked himself into rehab.

One council member suggested that the Ford Nation and Ford brothers change the name to “Fjord.” Fjord Nation: a chasm carved deep between reality and a fantasy.