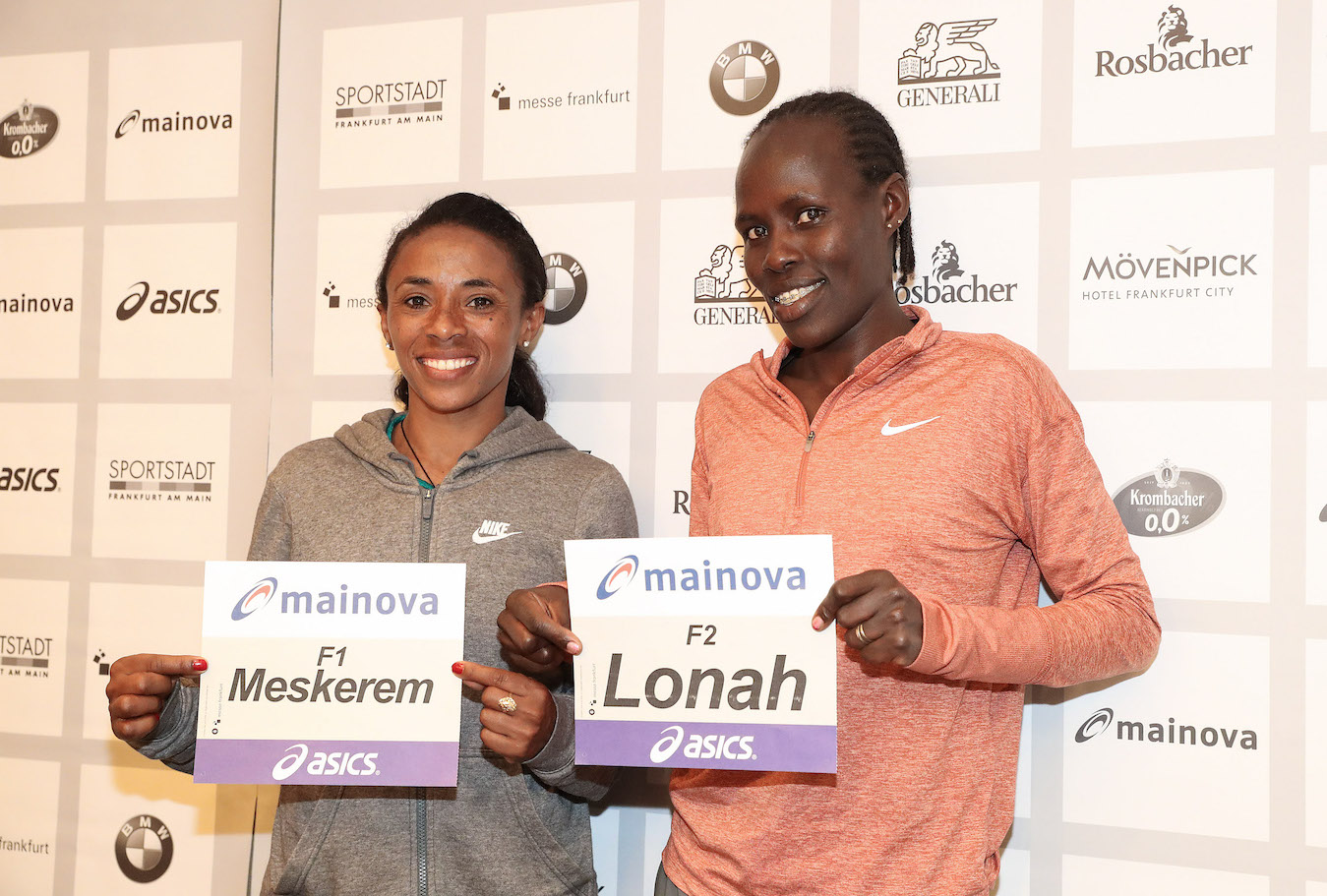 The 2:20 barrier is the major target at the Mainova Frankfurt Marathon on Sunday. No woman has achieved this time in Germany’s oldest city marathon and so far in Germany, only Berlin has achieved this distinction. Given good weather conditions, a group of women will be aiming to break the benchmark on Sunday.

Meskerem Assefa, who clocked the current course record of 2:20:36 last year, returns to defend her title. The Ethiopian is not the fastest on the start list since Lonah Salpeter of Israel has made a late entry and her personal best stands at 2:19:46. The men’s race will see a unique clash of the world junior record holder versus the world masters record holder: Tsegaye Mekonnen of Ethiopia against Kenya’s Mark Kiptoo. Sunday’s race will also have major significance for the many runners aiming for the Olympic qualifying times of 2:11:30 and 2:29:30 respectively on Frankfurt’s traditionally fast course.

Organizers expect around 14,000 marathon runners from 110 countries on the start line for the 38th edition of the Mainova Frankfurt Marathon. The race is an IAAF Gold Label event, the highest category in international road racing. It is still possible to enter during the Marathon Expo on Friday and Saturday. Further details can be found at: www.frankfurt-marathon.com

“We have put together an interesting field and I’m expecting great races with the possibility of newcomers to the marathon springing a surprise. The weather forecast is good, especially in contrast to last year there shouldn’t be any problems with the wind. In the women’s race the big question is whether Frankfurt will see the first-ever sub-2:20 time. Elite and mass sport belong together in a marathon. We want to have elite sport adding a special spice to the event,” said the race organizer Jo Schindler at the pre-event press conference in Frankfurt’s Mövenpick Hotel.

The elite fields promise thrilling races with world-class performances in prospect. Lonah Salpeter, the Israeli record holder, is not only the fastest woman in this year’s field with her best of 2:19:46 but the fastest ever to line up in Frankfurt. She and a clutch of other women all have the potential to run a course record or even 2:19 and bring the fans gathered at the finish line in the city’s Festhalle to their feet.

Last year’s women’s champion Meskerem Assefa of Ethiopia arrives with the memory of her course record of 12 months ago (2:20:36) still vivid in her memory. She says she is ready for a fast race as is the Kenyan Valary Aiyabei (2:20:53) and Meskerem’s Ethiopian compatriot Bedatu Hirpa (2:21:32) who finished third last year. Another Ethiopian to be reckoned with is Megertu Kebede who has a best of 2:22:52. The latter won the Rome title and wants a split for the first half of 69:00. “The women are in top form and we’re excited about what they might do. The watchword must be, keep it steady, don’t go out too fast at the start,” commented the elite race co-ordinator Christoph Kopp.

The arrival of Lonah Salpeter, a late entry for the race in Frankfurt, has added a big impetus to the hopes for a sub 2:20. Salpeter, the Israeli record holder, is the third fastest European of all time after winning the Prague Marathon this May in 2:19:46. Only the former world record holder Paula Radcliffe with 2:15:25 and Germany’s Irina Mikitenko with 2:19:19 have run faster. After dropping out of the brutally tough World Championship marathon in Doha, run in temperatures of 32 degrees Centigrade, she recovered well enough to enter the Mainova Frankfurt Marathon: “It wasn’t hard for me to start training again after the World Championships. I will do my best and see what happens.”

Someone who might well spring a surprise by taking the initiative is Megertu Kebede. She staked her claim in terms of speed over the shorter distances with a personal best of 66:43 at the highly competitive Copenhagen Half Marathon on September 15. She wants to run the first half in 69:00 and is clear about her intentions: “I am confident I can run a time under 2:20.” Also among the contingent with their eyes on the course record are the defending champion Meskerem Assefa, Valary Aiyabei and Bedatu Hirpa. “I’m stronger than last year,” said the 2018 women’s champion Assefa. Only slight behind them in terms of personal bests are other high quality performers such as the Kenyan duo of Caroline Rotich with a best of 2:23:22 and Sylvia Kibet, the Olympic 5,000m bronze medallist in 2008 as well as double World Championship silver medallist.

The fastest man in the field is Tsegaye Mekonnen, the world junior record holder from Ethiopia whose best of 2:04:32 dates back to his victorious marathon debut in Dubai in 2014. Eight men are included who have run under 2:08 and among them is the 43-year-old Mark Kiptoo of Kenya, the M40 world record holder. He achieved this distinction in Frankfurt last year, running 2:07:50 for sixth place. Kiptoo believes there is still more to come: “If the conditions are right, I can improve my world record again.” Christoph Kopp as elite race co-ordinator added: “Mark Kiptoo wants to run with the leading group who are aiming to go through half way in 62:30. He is experienced enough to achieve that. He is unlikely to win but can be right up there.”

Dawit Wolde, whose best is 2:06:18, is the husband of the women’s champion Meskerem Assefa and he and his fellow Ethiopians Fikre Tefera (2:06:27) and Tebalu Heyi (2:07:10) along with the Kenyans Bernard Kipyego (2:06:19) and Martin Kosgey (2:06:41), the latter runner-up last year, comprise the core of the men’s elite. A late addition is Daniele Meucci of Italy, the 2014 European Marathon champion.

The best German runners are Katharina Steinruck and the men’s marathon debutant Homiyu Tesfaye. Local competitor Steinruck will be going for the Olympic qualifying time of 2:29:30 in the company of other Europeans including the Briton Steph Twell. As for Tesfaye, he hopes to become the first German run the men’s Olympic qualifying time of 2:11:30.

Leading Runners and their Personal Bests:

More Information and online entry are available at: www.frankfurt-marathon.com