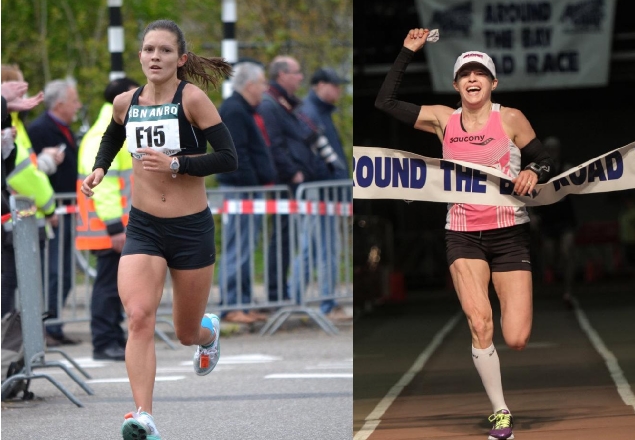 Krista Duchene and Lanni Marchant will continue their friendly rivalry June 23rd at the Scotiabank Vancouver Half Marathon. Here is a story on the two, who will represent Canada at the 2013 IAAF World Championships marathon in Moscow.

As far as rivalries go Canada’s leading female marathoners Krista Duchene and Lanni Marchant are on extremely good terms. No trash talking, no mud slinging. Cooperation up to a point.

In the absence of dedicated pacemakers the pair helped each other to personal bests at the 2012 Rotterdam Marathon which qualified them to represent Canada at the 2013 IAAF World Championships in Moscow later in the summer. But a major test of their preparedness comes June 23rd at the Scotiabank Vancouver Half Marathon, a race that Duchene won a year ago in 1:14:03.

“When we ran in Rotterdam we had never even met until we got there,” Duchene reveals, “and we just clicked in that first race working together. Obviously, in the end, it’s any person’s race. But, as the distance gets longer your competition also becomes your ally.”

Duchene began her 2013 Canadian season with a hard fought and very surprising victory at the Harry’s Spring Run Off 8km while Marchant won the Toronto Yonge Street 10k. Those events, as well as the SVHM,  are part of the Canada Running Series.

“I am really pleased with the season,” the 29 year old Marchant admits. “I have been setting some good times and hitting the expectations that my coach and I had heading into the season. I couldn’t be more happy.

“I guess I can compare to the buildup for the Rotterdam marathon. Before Rotterdam I didn’t have any races and I didn’t have anything to gage it off of. This buildup obviously I have been racing so I keep getting that little bit of encouragement that I am doing the right things because everything is going so well.”

Marchant competes for the London Western Track Club  but practices law in Knoxville, Tennessee where she attended university. Under the guidance of coach Dave Mills she has been putting in more miles per week than ever, up to 110 miles in a week, usually spread over two daily runs. The only exception has been when she has traveled to her races. Squeezing in two runs has been a challenge on those occasions. Nevertheless, she is feeling fit.

“I am recovering well and I am ready to go the next day or two for a harder session,” she declares. “My body is responding well to training compared to training before Rotterdam. I am doing twice the mileage so I would say my body is holding up pretty well.”

A year ago she lined up for the Vancouver race but dropped out around three kilometres with pain in her foot. It turned out to be a stress fracture and she couldn’t run a step until  August. What a difference a year makes.

“Of course winning would be great,” Marchant says. “I think any of us at this level we line up with a win in mind. But, if I am second to Krista, and we both run reasonably fast times, I am still going to count that as a really good race in my books. Krista and I have such a good racing relationship that, like I said, if we can push each other so we both run really fast times, then I am not necessarily concerned about who crosses the line first.”

Although the course is certified by AIMS and by Athletics Canada, because of its net downhill, any records set in the race won’t count.

“It would be great to go under 72 minutes,” Duchene, a native of Brantford, Ontario says. “Again I am not going to do anything silly to get any super fast time especially because,  even if Lanni or I go under Tara Quinn-Smith’s Canadian record it won’t count for anything. I think it would be great if the two of us work together as a little trial run for Moscow.

“I think we are both in really great shape. Our times are nearly bang on. I think some people could see it as a showdown between the two of us,  but I think we see it as an opportunity to work together and practice for the big day, which is August 10th.”

Marchant ran the half marathon distance in 1:12:17on March 9th in Nashville while Duchene’s personal best of 1:12:28 was achieved at the Banque Scotia 21k de Montreal (April 28), another Canada Running Series event.

As both maintain focus on the world championships, the first for each, they are approaching things calmly. At 36 years of age and the mother of three young children Duchene is not overly excited about running in such an important race.

“I am pretty calm with my faith and being just a little bit older. I never let my emotions get in the way. I am a fairly experienced marathoner now with nine,” Duchene says. “The travel is something I am not concerned about. It’s like a business trip.

“As marathoners you really do put all your eggs in one basket with only running like two a year. I am looking for decent conditions but you can’t control everything. Rarely do you have that perfect training with that perfect race date. I wouldn’t say nerves or anxiety have anything to do with it.  It’s really about executing the plan that (coach) Rick (Mannen) and I put in place.”

Duchene has taken the unusual step of forgoing sweets until after the world championship race. On February 9th of this year she had a peanut butter parfait and swore off temptation even while dispensing cakes at a recent senior kindergarten school event.

“After running the marathon on the 10th, my husband and I are going to travel Europe on the way back,” she says with a laugh. “Our 12th anniversary is on the 11th so I am going to enjoy all sorts of foods in Europe but it’s not going to taste as good as having that great race the day before.”

The Vancouver race will no doubt be another exciting confrontation between these two international class marathoners. Rivals first, but friends nonetheless.