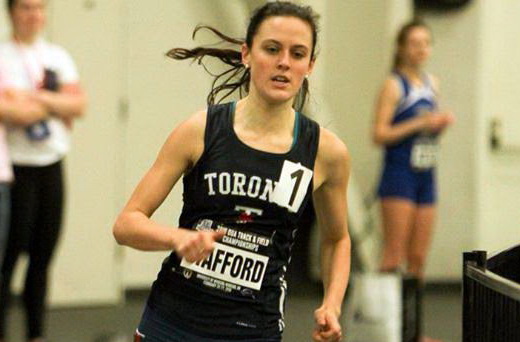 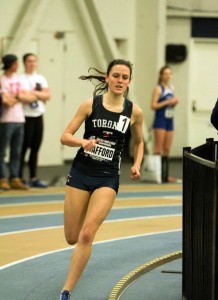 Toronto’s Gabriela Stafford is being tracked.

She is doing some tracking of her own, sort of speak.

Athletics Canada, the governing body of the sport nationally, has published an Athlete Tracker. The tracker provides fans and athletes an opportunity, leading up to the Rio Olympic Trials taking place in Edmonton (July 7 to 10), to keep track of who is on-track to make the Canadian Olympic team.

The highly anticipated July 11th announcement by AC of who will be on the team will happen one day after the trials. Between now and then the implications make for exciting sport watching.

Currently, many athlete’s status is in the air and with the depth of Canadian middle-distance running growing, we know there will be some talented Canadians not going to Rio.

The 1500-metre event, which Stafford is in the running for, is stacked and the stuff is about to hit the fan over the next few weeks, starting this weekend with the National Track League’s Harry Jerome Track Classic in Vancouver on Friday and the Victoria International Track Classic on Sunday. There are a total of five NTL events including Halifax, Guelph, Edmonton, Vancouver and Victoria.

She has run under the Rio Olympic standard of 4:07.00, but so have several other Canadian women. The order to the top five names can drastically change over the next few weeks.

Stafford is the latest addition.

She happens to be athlete number five of five who have run under the 4:07.00 benchmark with her 4:06.53 run on June 12 in Portland at the Portland Track Festival.

“I am running Harry Jerome to hopefully bring down my 1500-metre time further, but mostly just to get more race experience,” said the 20-year-old. “Then hopefully I’ll get into the 800-metre event in Victoria to shake things up a bit and then the 1500m again at the Speed River Inferno and then nationals [Edmonton]”.

Being just 20-years-old makes things interesting as her true ability may not yet be known.

Stafford told Athletics Illustrated, “It feels awesome to finally get that standard. I’ve been knocking on the door for some time and to get it off of opening in 2:14 through 800 is kind of crazy. I know there is a lot more there so I’m excited for the races coming up.”

Asked about the relief of getting her first sub-4:07 time she said, “When 4:06.5 finally came up on the board, I was just overcome with pure relief. Now I can’t wait to race without needing to worry about that!”

Athletics Canada requires athletes in many events to demonstrate competitive readiness, by repeating their performance. So Stafford, like of her competitors, will be racing hard over the next few weeks, which is exciting for sport fans.

Sidekick: Currently, Toronto’s Kate Van Buskirk, the 2014 Glasgow Commonwealth Games bronze medallist, is struggling to find her form, however, if she rebounds over the next few weeks, she will add more drama to the event, as will Benson, who had a dream year in 2015, but is also not racing to her own expectations. Benson in 2015 became just the fifth Canadian all-time to crack the two-minute barrier in the 800m and competed in the 2015 IAAF World Track and Field Championships.