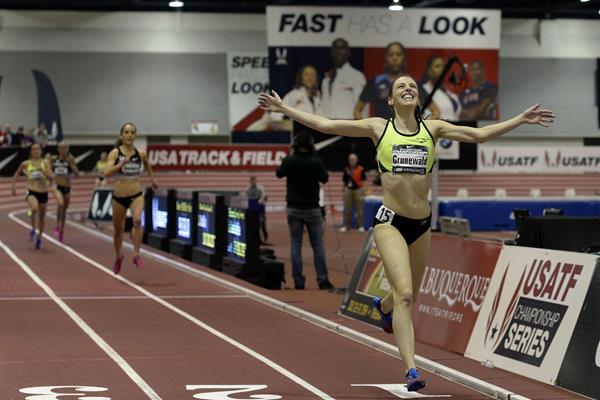 Gabriele Grunewald, better known as GG or Gabe, is an American middle-distance runner from small town Minnesota or Perham, MN to be exact. A graduate of the University of Minnesota, she currently runs as a professional athlete for Brooks as well as Team USA Minnesota.

More recently she placed fourth at the 2012 Olympic Trials in the 1500 metre distance. At the 2014 US Indoor Track and Field Championships, she won by a large margin, by unleashing a devastating finishing kick, after the race was taken out at a very pedestrian pace. She was temporarily disqualified for making contact with another athlete (Jordan Hasay) however, was reinstated. Grunewald, for the first time in her career will represent the US at the IAAF World Indoor Track and Field Championships, which take place from March 7th to March 9th in Sopot, Poland.

The twenty-seven-year-old has twice defeated cancer.

Christopher Kelsall: At what age did you begin running?

Gabriele Grunewald: I think I started running in junior high, maybe around age 12 or 13. Nothing serious at first, but I did run a little cross-country when it was available prior to 7th or 8th grade.

CK: What sort of town is Perham, MN – does it provide a good sporting environment to grow up in?

GG: Perham is a small town (about 3,000 residents) in central Minnesota’s lakes country. It is a pretty quiet town but fortunately has a well-developed athletics and activities department that has produced a lot of excellent competitors at the state level. I kept busy with running cross-country in the fall, playing basketball in the winter and running track in the spring, among other activities. And while our district wasn’t able to offer access to every single sport, I always felt like it was a pretty good place for enjoying team sports and other activities.

CK: Did beating cancer twice make you a tough runner?

GG: Yes, I think so. It just made my dreams crystallize a little bit more and it helped me prioritize certain things in my life that have ultimately helped my running too. Sometimes at the end of races when you have that choice of giving up and settling for a certain place or really going for broke, I have that little voice (sometimes it’s really loud, actually!) telling me that I have to go for it — because you just never know when you’ll get another shot. That is something that has stayed with me throughout all the years since my initial diagnosis.

CK: Congratulations on being named to the US team for the IAAF World Indoor Track and Field Championships. Being a known kicker, are you hoping for a tactical race at worlds?

GG: Ha-ha, yes, I can hope for a tactical race. But since the world record holder will be in the 3000m, I think I’ll have to be prepared for anything! The first goal is to make the final and then from there, I’m just hoping to mix things up mid-pack and see how high I can place. I think there are a lot of women I can run with in the 3000m, but it’s just going to be about who runs the smartest and has the most left after the first round. Even though a ‘kicker’s’ race would be good for me, I also think I’m in shape to PR in the 3000m.

CK: You have had a very interesting weekend and the media continues to cover your 3000 metre race and the events that happened around it at the 2014 US Indoor Track and Field Championships. How much were you aware of the extra-curricular events when you left the track that night?

GG: Yes, it was a very interesting weekend in Albuquerque. I had heard that I was officially the US Champion twice before going into team processing with USATF, then upon returning to the track I learned that the protest was re-opened. I knew that wasn’t good news. About 20 minutes later I found out I was officially disqualified and left the track after my party was told that no further appeals were possible.

CK: Can you describe the emotional roller coaster ride of winning the race in dramatic fashion, being DQ’d, the fall-out after, the media frenzy, then being reinstated?

GG: Yeah, it was definitely a roller-coaster. I had really been looking forward to the chance to earn a spot on the 3000m USA Team for a few months, so to win and finally make a World team – that felt really good. I think that I was in a little bit of shock initially with the DQ; just because I truly felt I won the race and didn’t think the protest would go that far. I lost hope that I would be reinstated after hearing nothing new on Sunday at the meet, so I started to prepare myself for the fact that things might not work out for me. Monday morning brought news of the reinstatement through my agent Paul Doyle, and I was actually really surprised! But I was thrilled, to say the least. It was an awesome feeling knowing that I would be representing the USA this weekend, which has been a big goal of mine for a very long time!

CK: Do you think you will get an apology like Lopez Lomong did?

GG: No, I am not expecting an apology.

CK: Again, being known as a kicker, were you surprised at how slow the race went out at, especially knowing that Jordan Hasay for one, is not a kicker?

GG: Yes, I was a little surprised how the race developed. I wasn’t expecting the race to be 100% honest, but I did expect a few people to push from further out. I don’t think we really started getting going until two laps to go, and that did surprise me. I was comfortable waiting because I did believe that my kick would be enough to make the team in the last 200-300 meters.

CK: Can you describe the feeling and emotion of lighting it up, with less than a lap to go?

GG: It was just awesome to have so much left at the end. Even though I was confident in my kick, I did not expect to win by that margin over such a short distance. I have never won a US title, so that felt pretty amazing. I went into the race with the main goal of making the team, but knowing I could win if I played my cards right. I was just so happy to finally put together a great race in a championship setting – that is something that has eluded me recently.

CK: Do you spend much time working on your finishing speed?

GG: We definitely work speed into my training, but this year I’m not typically doing repeats much shorter than 400m since I’m focusing on the 3000m indoors. I think I have a fair amount of natural foot speed for a mid-distance runner, and it seems to get better as I get more aerobically fit throughout the season. Short hill sprints are one type of session we do that really makes me feel sharp during base training.

CK: What does a typical training week look like during the off season and during race season?

GG: During the off-season I generally will do one long up-tempo run, along with two workouts, one being longer intervals with short rest (maybe 1200m reps) and then a 4-6 mile (7.5 – 10km) tempo run. Hills might be another day during that phase. During race season I’ve been doing an up-tempo long-ish run (shorter than usual) along with a 400m rep session (6-8 at mile pace) and then a few easy days before racing. I’m just glad that I’m racing this winter rather than just training — the winter has been too brutal to just train through without breaks for races!

CK: What are your goals after Sopot?

GG: My big goal for the year was to make World Indoors, just because I knew this would be the only opportunity to be a part of a championship in the ‘off year’ for 2014 outdoors. My coach and I will reassess after this weekend and figure out what my focus will be outdoors. It will be an outdoor season with a little less pressure and more racing my ‘off’ events like the 5000m and the 800m. My goal is always to become a little bit more savvy of a racer, so I’ll be continuing to improve those skills in high-level races hopefully.