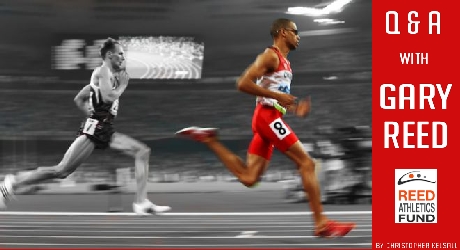 Typically athletes will lend their name and make appearances for a good cause however, The Reed Athletics Fund was not only the brainchild of its namesake, he is the Executive Director and Founder.

Reed struggled in his early years financially, while he worked his way to the top of his sport. He hasn’t forgotten the help he received and wants to give back.

Despite his struggles, Reed went on to better the Canadian 800m record several times eventually attaining the current Canadian record and personal best time of 1:43.68. He also won a silver medal during the 2007 IAAF World Track and Field Championships that took place in Osaka, Japan in 2007. He competed in two Olympics Games finishing a very close (to bronze) fourth position in the 2008 Beijing Olympics Games.

Q & A about the Reed Athletics Fund

Christopher Kelsall: Congratulations on the launch of the Reed Athletics Fund. I know you spoke of it at your retirement dinner in June of this year. Has this been a work in progress for sometime?

Gary Reed: Thank you for your interest in the fund, Chris. The fund is something that came about as soon as I decided to retire. I knew for years that I wanted to give back to the sport of track, I just was not sure how it was going to happen. The sport gave me everything in my life and I had some amazing people help me when I needed it the most and I will never forget those years and the struggle.

CK: This is the first foundation/fund of its kind, being that you are a retired athlete creating the organization and are the Executive Director. How did this concept come about?

GR: I realized a long time ago that a lot of track athletes retire and never pay any attention to the sport that carved their lives. I think there is a real chance to make a huge impact on the sport when you’re retired and I am lucky to have great directors, partners and donors that feel the same. The financial struggle that many of our Canadian athletes have to endure during the development phases of their careers just isn’t acceptable in a country like Canada where there are so many people with the means to provide support.

CK: You introduced a young athlete by the name of Quinn at your retirement dinner in June.

GR: Quinn is our first athlete. We really hope to be able to take on more in the near future depending on our financial shape. This will come through securing more partnerships and individual donors. We are encouraging four-to-eight year commitments in order to see an athlete through an Olympic cycle.

GR: Yes he is an 800m runner, but we are open to all track and field athletes in Canada at our future athlete calls. A call will be issued for applications in the near future on our website where athletes can apply, themselves.

CK: Have you established an identifying process or do you look at the athlete once they apply?
How does that process work?

GR: We have set criteria that the athletes will be able to view prior to applying. The criteria is very clear, we look at athletic progress, financial need, athletic and personal character. There is no identification process. All athletes who apply will be assessed against our criteria and a number of questions that will be asked of them. We also have an athlete contract that will have to be signed prior to an athlete being sponsored. This clearly lays out a number of requirements and expectations for the athlete such as submitted progress reports, attending appearances on behalf of RAF, etc.

CK: You had a tough go in the early days of your career.

GR: It was really tough for many years. It was a struggle to make ends meet to be able to afford to go to training camps, eat properly, buy running shoes, and train while working. The stress of all of this takes away from your ability to train. I want other athletes to know that there are people out there who understand their struggle and want to support them to see Canadians on the world stage. I was always happy in the early days of my career even though they were incredibly tough – it created an insane level of drive for me, but our athletes should have a basic level of support in order to allow them to make it through their development years. If not, the sport will slowly die. The only reason I was able to make it was because of the support I got at critical times along the way by a few generous people. Otherwise, I would have been forced out of the sport when I was 18.

CK: And based on your world-class performances that followed, that would have been Canada’s loss. This is a great opportunity for you to give back and a great gesture on your part. Again, congratulations on the initiative and good luck growing it.

GR: Thanks, I really appreciated the support.