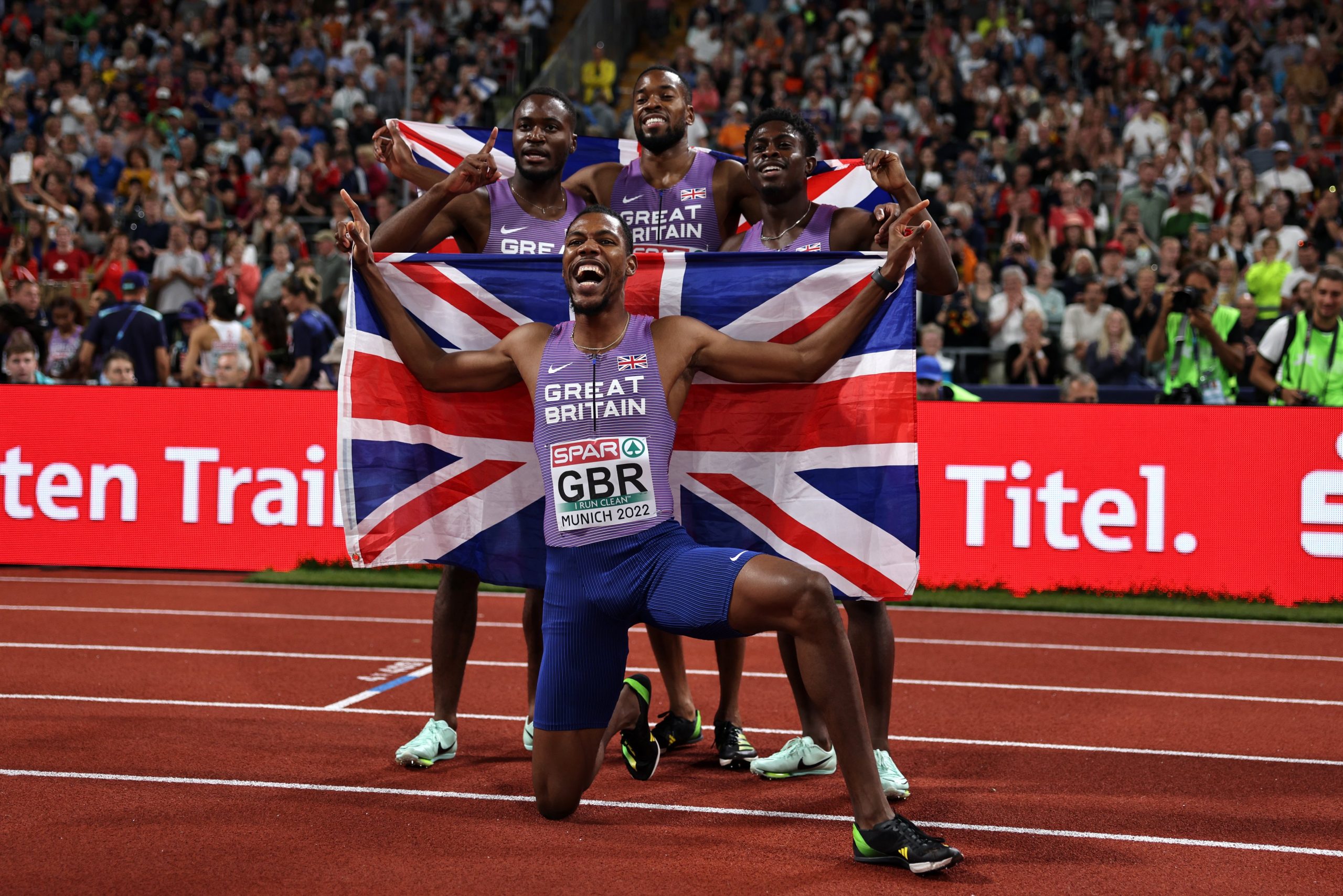 In the penultimate event of the night, the men’s quartet of Jeremiah Azu, Zharnel Hughes, Jona Efoloko, and Nethaneel Mitchell-Blake put together a flawless race to break the European Championship record, clocking 37.67s.

Bronze medallist in the 100m Azu flew out of the blocks and handed European 200m champion Hughes, who gave the British team a slim lead at the second changeover. Efoloko ran an excellent bend and provided Mitchell-Blake with a metre buffer, allowing him to storm to the title.

What a way to sign-off ✍️

Mitchell-Blake added, “It’s a great feeling first and foremost to come out with the gold, and to get a championship record is a bonus along with the win. It’s a testament to the guys who ran in the heats, Tommy [Ramdhan] and Harry [Aikines-Aryeetey] who got us here. It’s a true team effort and it’s nice to end a third championship with a gold.”

A steady start to proceedings saw the field hit the bell at 52.06s through the opening lap with Wightman and Pattison well placed in the middle of the pack and looking strong.

Wightman made his move with 200m to go, moving into lane two and stealing a march on World Indoor champion Mariano Garcia (ESP), but the Scot found himself edged out in the final metres, clocking a season’s best 1:44.91 with Pattison stopping the clock in 1:45.63.

Wightman said, “I came into this really wanting to add to my world 1500m title just because I feel like that would’ve been a great way to end the season. I felt in shape to do it and I got very close, but I’ve got a gold, a silver and a bronze on the season so at least I’ve got a full set.

“I knew that I needed to be a lot closer than I was through the rounds. Garcia finishes very strong and I felt as though I was in the right place and I was wiling him to come back. When you’re running like that the gaps don’t change much and I thought I had the strength to help me through but I didn’t quite have enough and towards the end it never really came back.”

Team captain Nelson reflected afterwards: “We’re a team. We win together we lose together whatever happens out there when we come back in, we talk about it and we sort it out. We’re a team and that’s the start and finish of it.”

Asher-Smith added, “We’re a team, we have seen it all. We’re such a strong squad and I feel we know what we’re capable of, we have a phenomenal time in us and unfortunately, this is why the relays and the hurdles are everyone’s favourite events because there are so many factors to get right.

“We’ve been so consistent over the years, we’re global medallists and were reigning champions and that doesn’t come without being excellent. Things happen and it’s unfortunate but it’s OK, we just grow from it.”

Lake made light work of the opening heights, showing a clean card up to 1.90m, which she cleared at the third time of asking with an excellent leap. Despite three good attempts at 1.93m, Lake was unable to improve on her mark, bowing out of the competition.

Lake reflected, “I’m just super, super disappointed really. It’s my fourth European Championships, and I really thought this would be the time that I would start to medal and fulfil my potential but it’s just not there at the moment.

“When you get a third attempt at a height like that (1.90m) it does take a lot of energy out of you. Using all that emotion means it is hard to get yourself up for the next height. I need to work on getting those first attempts and calming myself and going for the next one.”

Sember made light work of her semi-final, cruising to victory in 12.62s (0.1), the fastest qualifier of all. In the final, Sember got out brilliantly but clattered into the second hurdle that saw her drop well behind the leaders. She regained her composure but could not reel the field in.

Hunter finished eighth in her semi-final, crossing the line in 13.43s (0.3). Hunter looked to be progressing well in the early stages but came undone as she hit hurdle seven and faded out of the race.

Scott sat right on the shoulder of early leader Jimmy Gressier (FRA) throughout the opening laps, with Atkin and Cairess flanking him as the laps wore on and the pace ebbed and flowed. Cairess took the pace on through the 6,000m mark but quickly dropped back behind the leaders following his spell in the lead.

With around five laps to go, Cairess and Scott found themselves fading off the leading group, coming home in 28:07.37 and 28:07.72 respectively, the latter being Scott’s first 10,000m race of the season.

Cairess reflected, “That was rubbish. It’s easy to be in the right place when the race isn’t going yet but when the guys aren’t pushing it, but as soon as it got moving I couldn’t and I felt like my legs didn’t have anything from the beginning. Training has been way better than this.

“It wasn’t good for me I was hoping for much better, I just didn’t feel it and it was hard work. I wanted it to be a fast race because I thought I was, no I know I am in good shape. I didn’t want loads of people there at the end, but my legs weren’t cooperating at the end. But it can’t always go your way!”