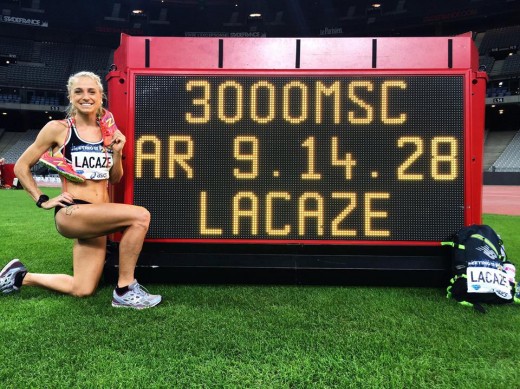 Genevieve La Caze is one of Australia’s top distance runners. The Brisbane, Queensland native specialises in the 3,000-metre steeplechase and the 5,000-metre distance run.

She attended the University of Florida on a scholarship, majoring in Social and Behavioral Sciences.

LaCaze is a two-time Olympian, having competed in both the 2012 London and 2016 Rio Olympic Games.

Athletics Australia was reluctant to send her to the London Games as she ran the qualifying time after the deadline, however, she went and although she did not make the final, she set a new personal best in the 3,000msc.

In Rio, she set three personal bests during the games and made the final in two events. She set the Australian and Oceania record for the 3,000msc with her performance of 9:14.28 at the Stade de France on August 27th of this year.

Christopher Kelsall: Congratulations on your new personal bests in the 5,000-metres and 3,000-metre steeplechase that you accomplished in Rio.

How did finishing 12th and 9th in the two events compare to your expectations?

Genevieve LaCaze: I went in with the expectation that I wanted to make a final in the steeplechase. I knew I could run a great 5km, however, I thought it would be a big ask to qualify less then 24hrs after the steeplechase final. Looking back at my Olympic Games in Rio, I definitely shocked myself overall. I managed to do three pbs and run 40 laps of the track in six days.

CK: What do you attribute to your jump in performances?

GL: A lot of people have asked what I have changed in my training or regular routine to have such a jump in track performances but I am doing everything the same, just better due to staying injury free. I was able to keep the ball rolling after last season and stay healthy, which meant I could build off that year rather than start from square one in November. When I have consistent layers of training each month, I really start to see my potential. I am just so grateful that this year I have been able to prove where I am meant to be and if I can stay injury free, who knows where I can progress to!

CK: Apparently you started running at the age of nine. What motivated you to start running at that young age?

GL: I grew up on a farm with three brothers so we were always running around doing something together. My dad was a sports enthusiast and had us in the pool learning how to swim before we could walk. My mum was the typical super mum that raced around on the weekends getting all four of us to our individual sporting commitments. We were a very active family so when I had my first school cross-country carnival, I did very well and fell in love with running.

CK: Did you understand at a young age how sport oriented Queensland is compared to other regions? Would you say the culture of sport success there contributed to your desire to do well?

GL: Growing up in Queensland and playing so much sport seemed so normal to me. It was all I knew. I guess I assumed that it was how all kids were being brought up. I think in general, due to Australia’s warm climate all year round, children seem to be extremely active and participate in a lot of outside sports. What really encouraged me and contributed to my desire to do well at a young age was the school I attended. John Paul College in Daisy Hill was so passionate about their sporting curriculum that I had great facilities and coaching growing up and was always in an encouraging culture, so I always wanted to strive to be the best.

CK: Who did you grow up admiring as an athlete role model?

GL: Craig Mottram. He was Australia’s best distance runner ever and he was the only runner that could mix it with the dominating Africans on the world stage.

GL: I played a huge amount of touch football which is a very popular sport growing up in Queensland. At a young age my parents had us taking swimming and tennis lessons. When I reached middle school I played hockey, soccer and started doing a lot of triathlons. I was always best at running however due to being so fit and agile I excelled at most sports.

CK: How does the training environment and sport culture compare to where you were living in Florida versus Melbourne?

GL: In college, especially at the University of Florida where the athletics program is so strong, there is a strong sporting culture all year round. Since it is a small college town, I loved how everyone was well aware and up to date with the sporting events approaching and results of every team when I lived there. The passion was very evident and encouraged all around campus. In Melbourne, it is a huge city with 4.5 million people and track and field isn’t an extremely popular sport. We go about our year, racing all over the world, but when we return home we slip straight back into our regular routine and go completely unnoticed. There is less of a following but I don’t mind flying under the radar during intense training.

CK: Can you describe a typical base week versus a week closer to a big event?

GL: Base season or when we are at altitude would look something like this:

Tuesday: am: 6x1km reps on a trail or grass track (1min recovery)

Saturday: Hill reps of some kind

CK: What are your favourite workouts or distance runs?

GL: I love long runs. It is such a good feeling when your body is healthy and fit and you can really get going on a long run. I run with the boys a lot so I spend a lot of the time trying to keep up with a fast pace. I also love shorter reps on the track like 400s. It is a powerful feeling mastering an anaerobic session.

CK: Can you describe the Rio 5,000-metre final? Atypical of championship event the times were fast, with Cheruiyot winning in 14:26.17, setting a new Olympic record. Was there the usual surging throughout?

GL: It did seem to be a rather fast race when looking at the end result but there was a lot of pace fluctuation. We started very quick, but between 2-3.5km it really slowed up to more 15.30 pace. This is always a nerve racking time because you know that at any point, someone will kick down. The world record holder in the 10,000-metre (Ayana) was out in front alone running a totally separate race for most of it, but the Kenyans slowly crept closer each lap and timed their run very well. For me I struggled most when the pace got really hot from 3.5km onwards. We started running 69s for a while and I ran out of legs with about 800ms to go. I was actually shocked I ran such a huge pb because I thought we had run a few too many slow laps in the middle somewhere.

CK: Ayana took off hard. Was that an error in reading her fitness and recovery? Was she trying to run the legs off the field?

GL: Well making a move like that is to break away and hope that no one can keep up so she had smart intentions. She probably just didn’t quite realise how much that 10,000 took it out of her. As athletes we have very strong minds and sometimes our mental strength tries to go beyond what our body is capable of. She misjudged her surge and got caught but that is the beauty of championship racing.

GL: I do love the 5000m event. It is a totally different race for me mentally and I run it so relaxed because I never expect myself to do that well. I will definitely continue racing it in the future. Doubling at major championships is something I will only do if it doesn’t impact my 3,000m steeple. That is my priority and in the coming years I would like to medal!