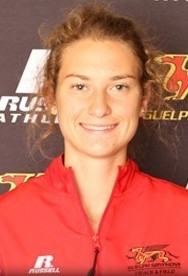 Canadian distance runner Geneviève Lalonde, who specialises in the 3000m Steeplechase event, is having a fantastic 2015 spring racing season. This is an opportune time to have a breakout as the Toronto Pan Am Games and Beijing IAAF World Track and Field Championships are taking place this year and the 2016 Rio Olympic Games are just over a year away. It is time now to attempt to qualify for these events.

Lalonde recently ran two-consecutive personal bests. On May 2nd, at the Payton Jordan Invitational, she set a new personal standard time of 9:46.05, this represented more than four seconds off of her previous best from her performance during an August, 2014 race, where she finished in the time of 9:50.79 in Ninove, Belgium. She told Athletics Illustrated, “Yes, I set a PB at Payton Jordan and it was very exciting. Going into this year I honestly just wanted to run faster than the last. Training and life have been going very well and so I was well prepared.”

On May 14th, she improved again, this time by nearly three and a half seconds, by racing the Hoka One One Distance Classic in Los Angeles. She crossed the line in the time of 9:42.40 to place third. “After the first PB I was on cloud nine. Once I returned to Guelph and took the time to reflect on that performance I realised that I could definitely go faster. The plan that I discussed with (Coach) Dave Scott-Thomas going into the Hoka One One Middle Distance Classic was to run a similar race but keep in mind that I was close to the (qualifying) standard. I knew I could achieve the standards but not to the extent that I did. Again I was pleasantly surprised with my time.”

With her Hoka One One performance, Lalonde has now run fast enough to compete in the 2015 IAAF World Track and Field Championships that take place in Beijing, China in August. She also ran the 2016 Rio Olympic Games qualifying standard. Should she wish to compete in the 2015 Pan Am Games in Toronto, she is currently the leading Canadian; she just needs to be the first or second-fastest Canadian in her event. There is no time-based standard, nor specific meet in which to qualify for Pan Ams, however, the window in which to qualify started on January 1st and closes on June 14th. From the Hoka meet performance, she ran well enough to qualify for three major games.

It was stormy night in Los Angeles during the Hoka meet, so-much-so that the scheduled men’s and women’s 5,000m races that were set to cap off the evening were cancelled. The weather did not seem to deter Lalonde, “Off the start line I was ready. It was a bit stormy in comparison to the typical sunny Los Angeles weather, but I remember thinking that this was meant to be. I actually felt quite tired but then just got myself into position and raced the bodies.”

Perhaps Hoka turned out to be good championship style racing practise, as often at major games the top athletes who typically control the pace, will change gears rapidly and competitors need to be prepared for this eventuality, or be left gapped from the field or potentially spent trying to keep up. Lalonde said, “It was a bit slower off the front end of the race, but then rapidly switched after the first 1600m. I was in a position of attack and just went with the top three. At about 1000m to go I was feeling fresh and decided to kick it into another gear. With the last lap I tried to catch the second position but unfortunately wasn’t as smooth over the water jump and just didn’t have the momentum. However I finished and felt great. In fact I thought our time would be above 9:50.00 and then looked at the time on the clock (9:42.40) and was kind of in a state of shock.”

Originally from Moncton, New Brunswick, she now competes for the Speed River Track and Field Club located in Guelph, Ontario under the direction of Head Coach Dave Scott-Thomas. The sort-of self-diagnosed faux-hippie, graduated from the University of Guelph in Environmental Sciences and Geography. In a 2012 interview with Athletics Illustrated she said, “I believe distance running in this country is finally starting to spark.”

She was correct in that statement. During  the past two years there have been many excellent performances in Canadian distance running from the women’s 800m event all the way up to both the men’s and women’s marathons.

For herself though, she will need to finish top-three in the 3000msc at the National Track and Field Championships that are taking place in Edmonton from the 2nd to the 5th of July this year in order to compete in the Beijing World Championships.

The World Championships qualification time criteria requires the steeplechasers to run under 9:44.00, but surprisingly the criteria – at this time – to qualify for the Rio Olympic Games is one second slower at 9:45.00.
Lalonde is no stranger to international competition as she has competed in various IAAF World Championships five times including twice in the IAAF World Junior Track and Field Championships in the 1500m distance and once in the 3000msc.

On reflection of her performances this month and since emerging from altitude training camp in Flagstaff, Arizona, she said, “Like many Canadian distance athletes our group had just come down from altitude training. I was a bit unsure of how I would react but had the opportunity to run with some of Canada’s best distance athletes up there, so I knew I was fit. At Payton the goal was to run a conservative from the start and then progress throughout the race. Everything worked out quite well and when I finished I was more than excited with the time, especially knowing that this was my first Steeplechase of the year.”

What is next for Lalonde?

“Over the next few weeks I will try and race some shorter and faster distances and then perhaps jump into another Steeplechase prior to the Edmonton National Championships.”  The 23-year-old added, “I will also try to spend some quality time with my friends and family just to refresh and then get back into racing!”