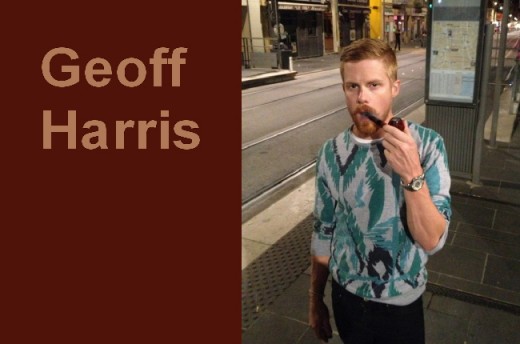 Twenty-six-year-old Geoff Harris of Halifax, Nova Scotia is one of Canada’s top middle-distance runners. He specialises in the 800-metre event. Harris has represented Canada internationally. He competed wearing the red and white in the 11th IAAF World Junior Championships that took place in Beijing, China in 2006. More recently, he competed in the 2012 London Olympic Games finishing seventh in the semi-final and 17th overall – exceeding his ranking that he was expected to finish in, by 20 positions. He is the 2012 and 2013 Canadian 800-metre champion. His personal best is 1:45.97.

Harris attended Dalhousie University in his hometown and is a member of Halifast Athletics. Currently, he is residing in Victoria, BC.

Christopher Kelsall: How is training going for you during the off-season?

Geoff Harris: It’s been a little rocky; I’ve had some really great cycles this fall going through it injury-free, and then some cycles of almost zero running due to a strained Achilles, a broken set of keys, 12 stitches, and a stairwell that will forever bare my stain! But all in all I do conclude one very important fact, FatTug is the second-best IPA I’ve ever had and probably the best Victoria has to offer! At 80 IBU’s it’s plenty hoppy but not too overpowering. I tend to lean to the hoppier side of IPA’s but this is just bloody tasty. So ya, all in all, training is going alright.

CK: What’s the first best IPA that you have ever tasted?

GH: Well the first IPA any east coaster drinks is a Keith’s! It’s not a beer I buy very much anymore if ever, but it’s still dear to my heart. The first real hoppy beer I drank was an exceptional one. There’s a microbrewery in Halifax called Hart & Thistle, the brewmaster is a fella named Steve Nash and he made an insanely hoppy limited edition called “The Hop Mess Monster”. I had the first generation a few years back, they are onto version four now. It contains an insane amount of hops, over 20lbs per barrel and over 700 IBU’s! That was a memorable introduction, to say the least! I’ve been hooked on hoppy IPA’s ever since.

“The beer has been marred with pure hopdonkulous deliciousness and insanity, just because we can.”

CK: What was the cause of the stained staircase; can you take me through the event? 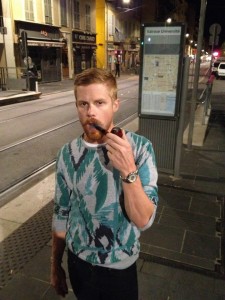 GH: That is a story that will only come out over several beers. All I can say is the stitches, keys; stairwell and my skull are all intimately connected.

CK: Connected like Harry Potter, Lord Voldemort, and the elder wand, yes? Have you tried the double ice bock that is brewed in Victoria this time of year, Hermannator?

GH: I got through half the first HP book and 18 minutes of the first movie before I started punching myself in the head. I have tasted the Hermannator and heard rumours and stories about it. I am intrigued by it and will take a much more serious investigation into it sometime in the future, I will also be sure to steer clear of stairwells because I have heard what the alcohol percentage is on that sneaky bastard.

* Hermannator comes in at an alcohol content by percentage of 9.5%

CK: Have you ever tried Hoperation Triple Cross by Phillips?

GH: Have I ever tried the Triple Cross? Did Lance ever try the EPO? Yah, it is a delicious little beer, it’s a Belgian IPA which is a paradox as the Belgians hate hoppy beers, but in keeping with that it’s a milder IPA, not a very bitter finish, but very tasty! First time I tried it the bartender couldn’t stop singing its praises and was distraught with me that I thought it was too mild. He looked about a day over 19-years-old so it was my fault for taking his word, still a good beer!

CK: Well thank goodness Duke Albrecht IV promulgated Reinheitsgebot in 1487. Who knows was sort of swill we would be drinking today. Are you a purist?

GH: Swill, what a great word, you wanna know swill? Coors Light Iced Tea… Any human who says, “hmmm, it’s hot out and I’d like a beer” and went to their fridge and took one of those out should have the driver’s license taken from them. Do you think the cans of beer that are displayed on the shelf beside the Coors Light Iced Tea are ashamed of their position? I’d like to think they are.

CK: It seems that many Belgian beers have a Champaign-like flavour and body. Do you fancy a stout, if so which is your favourite?

GH: There are just far too many options to even consider picking favourites, and at the risk of losing all credibility I never leave Belgium without getting a Kriek! (That’s cherry beer). Kriek is like fizzy Gatorade and is what a Belgian bartender reminded me is a “women’s beer”. But my god you find me someone who can have a Kriek and not have a smile. It gives you the false impression that you are hydrating it’s so sweet!

CK: So does Southern Comfort. Anyway, I assume because of your Achilles issues, indoors is not an option in 2014? 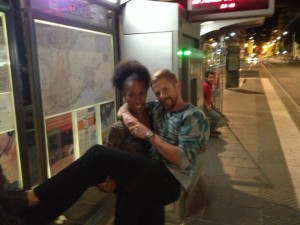 GH: It’s not out of the question yet at all, but I will make a call on in the next couple weeks. The rehab has been going well! Actually I have found the standard size roller too large to get into the specific area I need to hit so I have been using a beer bottle! Started with a wine bottle but realized a smaller circumference was going to work better. Right now I’m using the standard brown bottle but am thinking it’s time for a change, I think I’ll go green bottle soon which begs the question, what beer do you buy in a green bottle? Or do I just go rifling through the neighbour’s recycling bin for one? I don’t know what the right answer is.

CK: Does the circumference of the beer bottle provide a greater psi?

GH: I’m gonna have to confer with an expert about that, I do know that the elusive clear bottle is the best for therapy in so many ways.

CK: Do you get lost in there? Which brews do you favour that come in the elusive clear bottle?

GH: That’s a secret reserved exclusively for my inner circle, and right now it’s more of a rectangle. I try and stay away from there. The athlete in me knows it’s a bad place; the East Coaster in me looks for false reasons to get over to Uptown to shop so that I can pop in.

CK: I assume, based on your earlier comments about IPA’s, you prefer a brew with a lovibond rating of about 13, yes?

GH: That’s a good place to start, but honestly I stand by the principle you can’t judge a book by its cover. That works as well in beer terms “You can’t judge a beer by its colour”. I will say I get excited when I see a nice murky lovibond in the high teens to low twenties.

CK: What sort of running are you getting up to at this stage? Are you just doing mileage to get strong after time off? Where on the Plato Scale do you prefer your density?

GH: Trade secrets: can’t get into much detail, but I have tried a new thing called Yoga Slackline. It’s not what you’d think though, what it is, is you do yoga positions while on a slackline adding an extremely high degree level of skill and risk. It’s amazing what you can do when the consequence is a six-foot drop to the hard ground while in a compromised position!

CK: Except apparently when you have been enjoying Kriek near a staircase.

GH: There is no video evidence of anything and the concussion caused me to not have any real recollection, so I cannot deny or confirm anything. I will confirm that two east coasters, a moustached man from Nanaimo, some beer and deck of cards isn’t a great equation for balance.