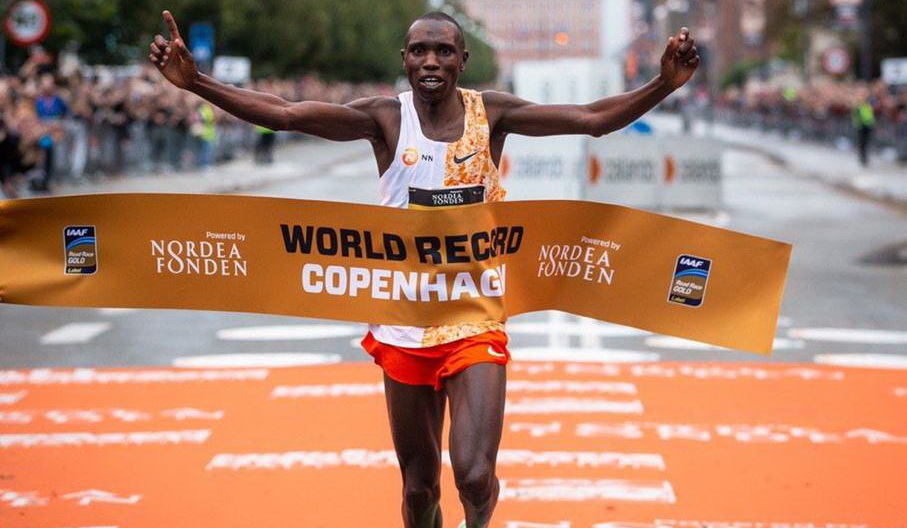 Three-time world champion on the half marathon, Geoffrey Kamworor of Kenya, showed his dominance this morning in Copenhagen, Denmark. The Kenyan set a new world record in the half marathon after crossing the finish line in the time of 58.01. The former record was held by fellow Kenyan Abraham Kiptum stood at 58.18.

Kamworor showed his fitness in windy and rainy conditions in the Danish capital, making his feat even more special. After breaking the world record Kamworor said: “Finally I could go for a fast time, and what a time it is!”

Kamworor’s next race will be the TCS New York City Marathon on November 3, where he will hope to regain his 2017 title.

Evan Esselink (29:50) and Malindi Elmore (32:44) laid down convincing markers winning Saturday’s Under Armour Eastside 10K ahead of an impressive field of 2,900 participants.  Esselink stuck with a group of runners including last year’s winner, Trevor Hofbauer who came in second place and Milton Ontario’s Ben Preisner who came in third.  Esselink made a move at the 8K mark and dropped the hammer at 9K to finish off strong contenders in defending champion Hofbauer and Preisner.

On the Women’s side, Malindi Elmore of Kelowna stormed to an outstanding victory on the challenging eastside course who, along with Esselink, will be competing in the Athletics Canada marathon trials at the Scotiabank Toronto Waterfront Marathon October 20th.  Elmore was able to hold off Boise Idaho’s Kinsey Middleton for most of the race as well as previous Under Armour Eastside 10K winner Leslie Sexton who came in third.

Over social media, Wodak said, “Way to go Malindi Elmore!!! Normally I don’t like my records being broken, but I love seeing you crush it!!! So excited to see what you do in the Toronto marathon!!!!”

Wodak is preparing for the 2019 IAAF Doha World Athletics Championships starting September 27. She is in Europe training at altitude. Wodak is the national record holder in the 10,000-metres 31:41:59. She will be competing in the 10,000 in Doha.

The event attracted a field of 2,900 runners and so far has raised over $26,000 in support of the Downtown Eastside Women’s Centre, PHS Community Services Society, and Youthco. Participants can continue to fundraise online until October 1st online at www.eastside10k.ca.

“Every year the competition gets better,” said race director Ryan Chilibeck. “It’s also so great to see runners completing their first run, setting personal bests and fundraising for our three great charity partners. The Under Armour Eastside 10k is a true community event.”

About Under Armour Eastside 10k:

The Under Armour Eastside 10k is part of the prestigious Canada Running Series. As Vancouver’s premier fall 10k, it takes place in the Eastside, running for three Eastside embedded charities, with the great Eastside Community. More than 3000 runners take to the streets each September to show their love for the heart of Vancouver. Canada Running Series is the nation’s premier running circuit with events in Toronto, Vancouver, Edmonton and Montreal.  It annually attracts over 65,000 participants and raises more than $6 million for some 320 charities. Canada Running Series is strongly committed to staging great experiences for runners of all levels from first-time runners, charity supporters and Canadian Olympians; and to making sport part of sustainable communities and the city-building process.  Our mission is “building community through running”. For more information please visit: www.CanadaRunningSeries.com