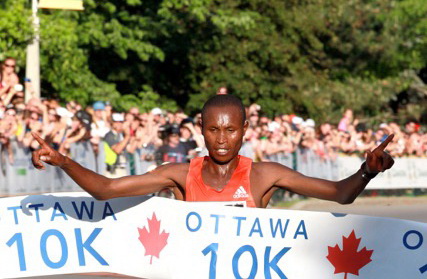 Geoffrey Mutai has a torrid love affair with the Ottawa 10k. The Kenyan superstar returns to the
Canadian capital for the fourth time in six years to compete in this IAAF Gold Label race
(Saturday, May 27).

Mutai, a past winner of the Boston, Berlin and New York marathons, is one of the biggest
names in the sport and is truly deserving of the title ‘superstar’.

Throughout his enviable career, he has experienced both highs and lows and now hopes that
Ottawa will see him regain the form to which race fans across the globe have become
accustomed.

“I ran there before and I like the race,” he says of his decision to return. “I want to build up again
and a 10k is what I had in mind.”

Out of despair sometimes there comes good fortune. Five years ago, he was dealt a
disappointing card, which ultimately led to his relationship with Ottawa. Despite winning the
2011 Boston and New York Marathons he was not chosen for Kenya’s 2012 Olympic team and
was forced to alter his training and competition schedule. That was when he added the Ottawa
10k to his calendar.

On what was his first visit to Canada, he promptly destroyed a world-class field. He won the
race by an astounding 45 seconds with a time of 27:42. Had it not been for the warm conditions
that night, Deriba Merga’s 2009 course record of 27:24 might well have fallen.

A pair of third-place finishes in 2013 and 2014 solidified his relationship with the Ottawa event.
Now, 35, and, battling back from a series of injuries that saw him race only twice the past two
years, he is cautiously optimistic his comeback will be successful.

“After a long injury and no competition it is not easy to say how my fitness is compared to the
past,” he reveals. “Training is going well and I hope to run pretty fast in Ottawa. Training is like
in the past, except I focus more on speed to run a good 10k. I hope to run 28 minutes in
Ottawa.”

Mutai has the good fortune of training with a stellar group of distance runners, which includes
world marathon record holder Dennis Kimetto, 2012 Olympic marathon bronze medalist Wilson
Kipsang and Emmanuel Mutai (no relation), the 2011 London marathon winner. He says he is
grateful for their support during his lengthy injury period.

“After the 2015 Berlin marathon (he finished 5th in 2:09:29) I had a stress fracture in my leg,” he
says. “More recently I had some muscle and tendon issues and I took treatment in the
Netherlands and in Kenya.

“It was not always easy but I was very determined to make a comeback. My family, my fellow
athletes and my agency (Volare Sports) supported me a lot and always told me to believe in
myself and not to give up.”

A year ago he lined up for the Ceske Budeovice Half Marathon in Prague expecting to run a
time close to 60 minutes. When he finished well beaten in 64 minutes people largely wrote him
off. But from the disappointment, he was able to extract something positive – a characteristic that
has helped him in the past.

“Yes, I had hoped to be better, but I was also happy to run again without pain,” he explains. “I
needed that to be better next time. I raced a 10k in Trento after that. I ran 29:44 there.”
Although much of his day is taken up by training and resting, he is also a family man. He and his
wife Beatrice are parents of two young daughters Mereka, 5, and Mishel, 8. And he has also
dived into the real estate business building rental housing and other projects. Running,
nevertheless, remains a huge priority.

Mutai is aware that his advanced years make it more difficult to handle the heavy training that
led him to past victories at the world’s biggest road races. Nevertheless, he cautions the
doubters.

“For the marathon, I have nothing planned now,” he declares. “Maybe I will do another half
marathon after the Ottawa 10k. I hope to run a good marathon again next year.
“I am not yet done with running.”