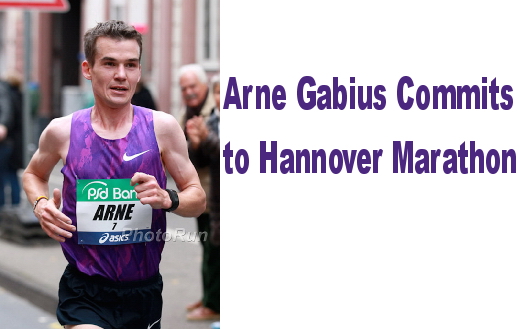 Organisers of the HAJ Hannover Marathon caused a major pre-Christmas surprise today by presenting German record holder Arne Gabius during a press conference. The 35 year-old will run his next marathon on 9th April in Hannover. The HAJ Hannover Marathon has developed well in recent years and is an IAAF Silver Label Road Race. Entry for the event, which also includes a half marathon that will feature the national championships for the first time, is available at: www.marathon-hannover.de

“I know that I probably caught many people by surprise by committing to the HAJ Hannover Marathon,“ said Arne Gabius. „However after my injury I was looking for a suitable race to come back and did not want to go for a major international marathon like London straightaway. I wanted to run in Germany and Hannover is a great race where I am sure that I will find excellent conditions.“

A long-term injury with an inflammation in the pelvis area forced Arne Gabius to first withdraw from the Olympic marathon and then cancel any plans for an autumn marathon. Before he had dropped out of the London Marathon in April so that he last completed a marathon more than a year ago: It was in Frankfurt where he broke the long standing German marathon record with a time of 2:08:33 in October 2015.

„There should not be too much pressure for me in Hannover and I hope to enjoy the competition. Additionally the earlier April date of the race suits me,“ said Arne Gabius, who recently started running sessions again after doing most of his training in water before. He plans to run a first competitive race on New Year’s Eve and will then determine when and how long he will go for training to Kenya in the built up to Hannover. It is likely that he will run at least one half marathon before his marathon race.

„Of course I would like to run a time of around 2:10 in Hannover – however at present I am simply unable to make any predictions. I have never had such a major injury in my career before so that I have to wait and see what kind of shape I can get myself in,“ said Arne Gabius, who might still opt for a marathon start at London’s World Championships next summer. This will of course depend on his race in Hannover and on the recovery after that. On the very flat course in Hannover the German qualification time of 2:13:00 should normally not be a major obstacle for Arne Gabius.