Three days after clocking a German steeplechase record in Zurich Gesa Krause thrilled the home crowd at the ISTAF in Berlin’s Olympic Stadium by smashing the world best in the 2,000 m Steeplechase. The 27-year-old clocked 5:52.80 for the distance, which is not a standard event.

Kenya’s Virginia Nganga was the former holder of the world best. She ran 6:02.16 at the ISTAF four years ago. There was another very strong result that excited the home fans: The German 4×100 m women’s team took the relay with a world lead of 41.67 seconds. While Sweden’s European Pole Vault Champion Armand Duplantis won the event with 5.80 m the Pole Vault was one of a couple of technical disciplines that were affected by swirling winds, which developed during the hot afternoon. It got so bad that the Pole Vault was terminated for safety reasons. There were 40,500 spectators in the Olympic Stadium on Sunday. The ISTAF is part of the IAAF World Challenge Series.

Ten years after the World Championships in this stadium a very emotional Ariane Friedrich retrospectively received the high jump silver medal from the 2009 World Championships in Berlin. Anna Chicherova of Russia was disqualified for doping in February 2018. There was huge applause for Ariane Friedrich who received the medal during a nice ceremony from the IAAF’s Chief Executive Officer Jon Ridgeon.

Kenya’s pacemaker Caroline Tuigong led the leaders of the 2,000 m Steeplechase through halfway in 2:58.18. During the second half of the race, Gesa Krause was running right behind Bahrain’s Winfred Yavi and was a bit fortunate that the former Kenyan was doing some fast front running. At the final water jump the German moved ahead and there was no way catching her on the home straight. Yavi also broke six minutes by a couple of seconds, clocking 5:56.83 for second. Luiza Gaga of Albania took third with 6:00.07. Both times are national bests as well.

“It is incredible! Although this was 1,000 m shorter than usual I am extremely proud. This race shows my current performance level,“ said Gesa Krause, who had ran a 9:07.51 national record in Zurich on Thursday in the 3,000 m Steeplechase. “Now I have to stay healthy until Doha. I am highly motivated for the World Championships and I want to be in the mix there.“

In the 100 m Poland’s Ewa Swoboda showed a strong race. With a slight tailwind of 0.7 she stormed to a personal best of 11.07 while second placed Briton Asha Philip tied her PB with 11.10. China’s Xiaojing Liang took third with 11.13, also a personal best. Germany’s Gina Lückenkemper was fourth with 11.15. “I did not expect such a time and a victory. I don’t know how I did it – I just ran. This is a huge result for me, I am very confident now,” said Ewa Swoboda.

There was another very good sprint performance in the women’s events: The German 4×100 relay team clocked a world lead of 41.67 – one of Germany’s fastest times ever. Lisa Kwayie, Yasmin Kwadwo, Tatjana Pinto and Gina Lückenkemper China was second with 42.31 and Germany II took third (43.19).

The women’s sprint hurdles were fast as well: Tobi Amusan of Nigeria was the winner in 12.51. Christina Clemons of the US took second in 12.69 and Nadine Visser of the Netherlands was third (12.72).

In the Long Jump, Malaika Mihambo confirmed her strong form this season. After her second-round leap of 6.99 m she did however not jump again. This probably had to do with the more difficult weather conditions with a very light rain shower besides the winds. “I am satisfied with today’s 6.99. I did not want to push it today,“ said Mihambo.

In the women’s Shot Put Canada’s Brittany Crew improved her national record twice. First she achieved 19.10m in round two, then she managed 19.28m with her final attempt. She took the Shot Put from Christina Schwanitz (18.62) and Jessica Ramsey of the US (18.55). If Crew keeps going towards Doha she might be in with a chance for a medal. “At the Diamond League final in Zurich, I had a foul for a really good attempt. Today I stayed in the ring after this great throw. This is an important victory on the way to the World Championships. I don’t want to have too many expectations for Doha, but I guess I have a chance to get a medal,“ said Brittany Crew.

The Pole Vault looked really promising when the three top stars Sam Kendricks, Armand Duplantis and Piotr Lisek were left in the competition at 5.80 m. However, the winds made it really difficult for them. Poland’s Lisek missed his three attempts while US World Champion Kendricks cleared the height in his final attempt. European Champion Duplantis was the leader since he had jumped 5.80 at his second attempt. Both then decided to retire due to the wind. Valentine Lavillenie of France took fourth place with 5.60 m. „It was a hard-fought victory for me. The wind was bad. But even in such circumstances, one can jump 5.80 in this wonderful stadium. This shows that the Berlin Olympic stadium is such a great place,“ said Armand Duplantis.

The final two rounds of the javelin were also hampered by the wind. Only twice was there a valid throw in these rounds. When conditions were still better at the beginning World Champion Johannes Vetter threw 85.40 m in round two, which was enough for victory. For the German it was an important victory after an injury period. „Even though I was not able to throw 90 metres I am very happy to have won at the ISTAF,“ said Johannes Vetter. Edis Matusevicius of Lithuania was second with 85.10 while German Andreas Hofmann took third (82.16).

Poland’s Piotr Malachowski took the Discus with 65.17 m from World Champion Andreas Gudzius of Lithuania (64.51) and Germany’s David Wrobel (63.43). Meanwhile Berlin’s Discus Olympic Champion continues his poor form: He was last of nine throwers and missed the cut after three rounds with 60.06.

Olympic Champion Omar McLeod of Jamaica won the 110 m Hurdles with a season’s best of 13.07 from France’s European Champion Pascal Martinot-Lagarde (13.25). There were two sub 10 seconds times in the 100 m: Canada’s Andre de Grasse triumphed in a season’s best of 9.97 from Akani Simbine of South Africa (9.99). Jamaica’s Tyquendo Tracey was third in 10.06 with a tail wind of 1.4. “After my injury this was like a comeback for me,“ said Andre de Grasse.

More information about the ISTAF is available at: www.istaf.de 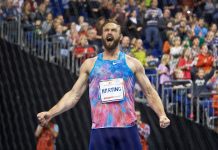 European Champions return to the Olympic Stadium for global challenge