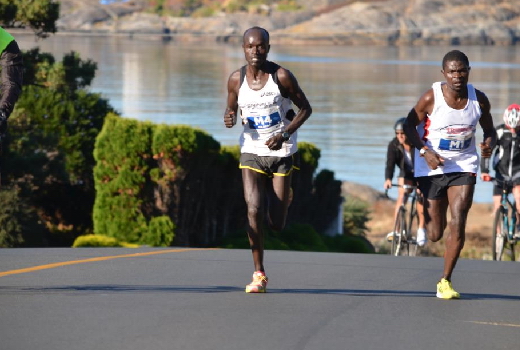 Kenyan Gilbert Kiptoo will be racing the 2014 GoodLife Fitness Victoria Half Marathon, Sunday, October 12th with a goal of winning and finishing no slower that one-hour and five minutes, perhaps up to a minute faster.  He has been training as much as 210 kilometres per week this summer and told Athletics Illustrated, “My training is going well, I am feeling good and I plan to race around 64:00 to 65:00.”

Currently based in Toronto, Kiptoo is originally from Ziwa, which is a small centre approximately 20 kilometres north of Eldoret.

Kiptoo is no stranger to the streets of Victoria, having raced the 2013 edition of the GoodLife Fitness Victoria Half Marathon where he crossed the line in the time of 1:06:39 to finish fourth overall. In 2012, he finished the GLFVMarathon in the time of 2:27:01, to finish second to countryman Thomas Omwenga. Kiptoo has also competed in Victoria’s 2013 TC10K, which follows the same finish as the half marathon and marathon. During that running of the TC10K he finished fifth overall with the time of 30:08.

“Victoria is my favorite place in Canada, the weather is always good,” said Kiptoo.  After Victoria he will pace the Scotiabank Waterfront Toronto Marathon, then go home to Ziwa. “I will go home for real training and come back next year for the TC10K and the Vancouver Sun Run,” said Kiptoo when asked about his fall and winter training plans.

The GoodLife Fitness Victoria Marathon weekend also includes an 8K race and of course the flagship event, the marathon, that will be run for the 35th time this year, but the half-marathon is the most popular and typically includes a field of several East Africans of a similar calibre to Kiptoo as well as some strong local and Canadian talent, to help push the pace over the fast, but rolling course.