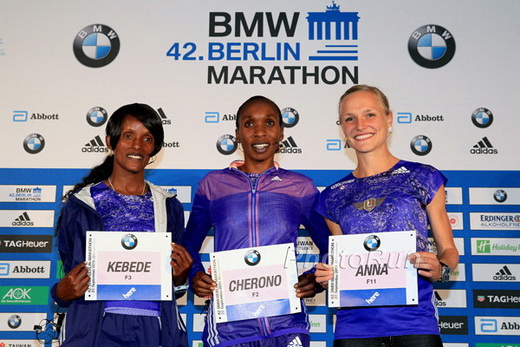 Talk about the BMW BERLIN-MARATHON has so often been about records, with speculation about who can make their mark on history by breaking the world record, but this Sunday’s race put the emphasis on competition as Thursday’s press conference for the elite women confirmed. Aberu Kebede of Ethiopia, twice a winner on this renowned fast course, will line up in search of a hat-trick while Kenya’s Gladys Cherono takes aim not only at victory but breaking the 2:20 barrier in only her second race at the distance, having made an outstanding debut with 2:20:03 for second place in Dubai in January. The quality of the field suggests that intense competition will put the world best this year of 2:19:52 of Ethiopia’s Mare Dibaba under pressure, rather than a calculated attack on the clock. What is guaranteed is that the 42nd edition of the BMW BERLIN-MARATHON, the latest in the Abbott World Marathon Majors, will again be Germany’s biggest marathon with 41,224 on the start line. Many will be hoping that Anna Hahner, seventh last year in a personal best of 2:26:44, will achieve the Olympic qualifying standard of 2:28:30 for Rio in 2016. The BMW BERLIN-MARATHON is an IAAF Gold Label event, the highest category of road race.

“This is my first time in Berlin and I’m so looking forward to the race,” explained Gladys Cherono. The 32-year-old was prevented by injury last year from making her debut at the distance in the BMW BERLIN-MARATHON. The manner of her performance in Dubai when she finished runner-up and with the third fastest female debut of all time suggests that Cherono, a 2013 World Championship bronze medallist at 10,000m, has potential to make headlines in the marathon.

“The other runners have more experience of the marathon but I’ve been learning,” reflected Gladys Cherono. She admits that her preparation has been excellent, highlighted by a personal best at half marathon of 66:38 to win in Istanbul on April 26. Perhaps even more impressive was that she left Helah Kiprop, silver medallist at the World Championship marathon in Beijing last month, almost two minutes behind. Responding to whether victory was more important than a fast time, Cherono’s reply was practical and to the point: “If you run fast, the chances are you’ll win as well!”
If a comparison proves useful, the last time a woman broke 2:20 in Berlin was four years ago when fellow Kenyan Florence Kiplagat ran 2:19:44. This was also the second marathon her career, as it will be for Gladys Cherono on Sunday.

The competitive fires of Aberu Kebede burn just as brightly. The Ethiopian has already won the BMW BERLIN-MARATHON title twice, in 2010 and 2012, setting what remains her personal best of 2:20:30 on the latter occasion. “If I could win for a third time, it would be a crowning moment in my career – and also a record,” said the 26-year-old. Achieving the hat-trick on Sunday would rank her alongside Germany’s Uta Pippig, the 1990 winner of the first Berlin marathon through what had hitherto been a divided city, and Poland’s Renata Kokowska. “I want to break 2:20 once and for all,” said Aberu Kebede. She won’t be the only Ethiopian vying for a place on the podium with Meseret Hailu (2:21:09) and Tadelech Bekele (2:22:51) likely to have a say in the outcome.

The leading German women’s hope is Anna Hahner, who has been comparing notes with Uta Pippig on the atmosphere for the Berlin race. Hahner will pursue the Olympic qualifying standard of 2:28:30, having given the Rio course a trial run last month when she cruised round in 2:39:15. Hahner ran her personal best of 2:26:44 for seventh place here last year. She returned from Brazil and her comment hardly needs translation: “Rio rockt!”

She was barely one year old when Uta Pippig made history in running through the Brandenburg Gate in 1990 but both share a joyful attitude to running and competition. Pippig, winner of Berlin, Boston and New York marathons, believes this will stand Anna Hahner in good stead: “She has such positive energy and that is very important in the marathon.” Advice which every one of the 41,224 participants can take their hearts when Uta shares the starting gun duties with Berlin’s Mayor Michael Müller and Peter van Binsbergen of BMW at 9 o’clock on Sunday morning.