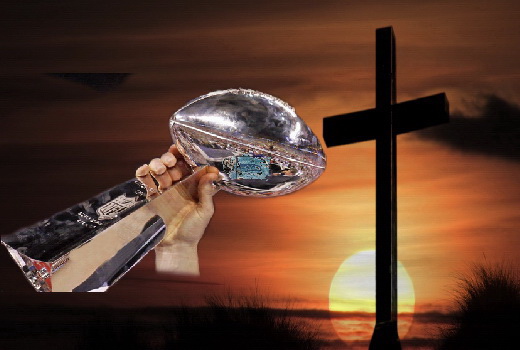 The Seattle Seahawks won their first ever Super Bowl today in East Rutherford, New Jersey against the nearly Godless Denver Broncos. The Seahawk’s faith in God propelled them to a lopsided victory by a score of 43-8, proving once again that God likes to pummel the nearly faithless into submission. Bronco’s C.J. Anderson tweeted before the game, “As I put on this suit 2 get ready 2 play in the biggest game of my career I jus wana say God I love you an 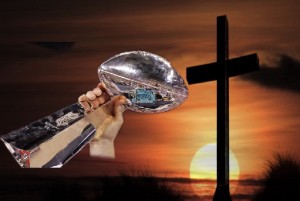 d thank you.” Also proving God hates twitter.  Where post-game Seahawks quarterback Russell Wilson said in a post-game television interview with Fox, “I thank God for putting me in this place right here.” Meanwhile 218 of 888 million Africans exist in abject poverty. Do they tweet?

Seahawks, who own a regular season record of 16 wins and 3 losses, were too fast and too strong in all facets of the game. The game was being heavily promoted in advance as a classic clash of unearthly offense (Denver) versus Godlike defense (Seattle). Clearly the divine plan was for Seattle to win this game. The Seahawk’s domination was thorough. The straw that broke the camel’s back was a 69-yard interception return for a holy touchdown by linebacker Malcolm Smith followed by the heavenly 87-yard kickoff runback that started the second half off to a gridiron damnation for the Broncos. Smith was voted MVP of the game for his ability, through prayer, to activate the Holy Spirit. Russell Wilson made a 23-yard touchdown pass to Jermaine Kearse late in the third quarter to make the score 36-0. Doug Baldwin also scored on a 10-yard run in the final quarter to cap one of the more lopsided Superbowl victories ever.

“We been relentless all season,” Wilson said. “Having that mentality of having a championship day, every day. At the end of the day, you want to play your best football and that is what we did today.” Begging the question, didn’t God rest today, on his Sabbath? Clearly he was prompted to break from the divine plan by Smith, but Seahawk fans cannot forget Sylvester Williams, who tweeted, “Wow I can’t believe it’s here!!! #Blessd #GoBroncos.” proving God also hates people who can’t spell, while tweeting.