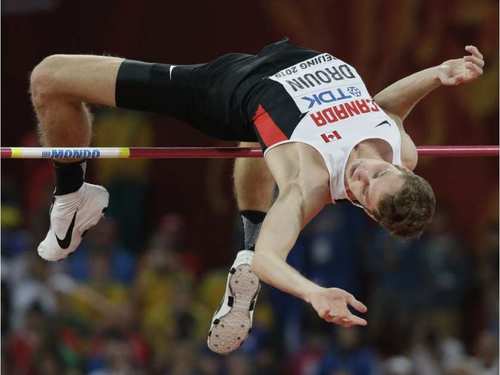 Canada’s and perhaps the world’s best high jumper right now is fine tuning his game. He has two Canadian competitions coming up on June 17 in Vancouver at the Harry Jerome Track Classic and two days later in Victoria during the Victoria Track Classic.

Drouin knows that the road to the Rio Olympic Games is littered with hurdles, or high-jump bars for the Corunna, Ontario native.

Although he is one of the top elites in the world in his event, qualification comes in one, single and final competition taking place in TrackTown, Canada (Edmonton) from July 7 to July 10. Regardless of how “ready” a Canadian athlete gets themselves in advance of the Rio Olympic trials; they still need to perform top-two during the meet and in some cases top-three. Drouin is no exception. He will be in Victoria to fine tune his game.

The twenty-six-year-old, six-foot, five-inch jumper is the defending IAAF World Track and Field Championships gold medallist. He is coming to Victoria, June 19th in preparation to take on the world during the Rio trials and likely the Rio Games.

“I’m excited to compete in Victoria for my first time,” said the former Indiana Hoosiers athlete. “It’s a privilege for us, as Canadian athletes, to compete on Canadian soil, rather than having to fly to Europe to find great competition, especially in an Olympic year.”