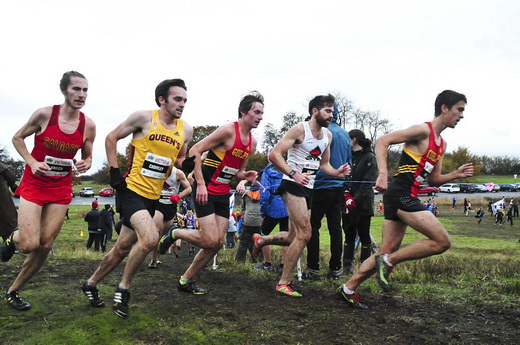 Sasha Gollish of the University of Toronto and Yves Sikubwabo with the University of Laval were crowned the 2017 U Sport Cross Country Champions, Sunday, Nov 12th on the grounds of Victoria’s Beacon Hill Park.

Gollish led her team, along with Lucia Stafford to a first-place finish while Sikubwabo tried to help Laval defend their title from home turf last year. They didn’t win, but they did podium, finishing third overall.

The University of Guelph (9th in 2016) won this year, while surprise Calgary Dinos, led by an aggressive Russell Pennock, finished second.

The host team, the University of Victoria Vikes, finished fourth in the women’s and seventh in the men’s. The women were led by very strong running by Allison Hooper and Chloe Hegland, who finished 13th and 15th overall respectively. They are crowned Canada West champions.

“Yeah, I am happy with the result,” shared Hegland. “I thought I would run up with Allison and go for it. I like consistent pacing best. I don’t run as well with change-of-pace as I don’t have the leg speed, but I am fit right now and feel I ran well.”

She did, as she held her position throughout.

Sunday saw the return of cross-country competition to Victoria’s Beacon Hill Park for the first time in a decade.

The Griffons, Sunday, were led by Connor Black who finished second overall to Sikubwabo.

“I am very happy with how things went today,” said a clearly pleased Black. “We had a plan and stuck to it. I am really proud of the way my teammates ran. Right through the team everyone ran strong.”

The front of the pack for four of the five two-kilometre loops was big including up to 40 runners at times, who were running within a handful of seconds of each other. None of the frontrunners seemed to want to make a move, yet the pace was strong.

After the first lap, Sikubwabo sat two seconds back, but in 28th position. He moved into fourth for the second lap, while Pennock kept the pace honest by leading. During the fourth lap, Sikubwabo opened things up and cut the frontrunners down to just three, Sikubwabo, Black and Isaiah Frielink of Western University.

“I wanted to help the team win,” said Sikubwabo. “We won last year and we were hoping to defend our title. I was helping my teammates.”

Sikubwabo will now compete on the roads, likely starting with the Houston Half Marathon in January.

“Yes, I will likely go to Houston. It seems like that is where a lot of Canadians go to get a good time in the half-marathon.”

The second-place team was the surprise University of Calgary Dinos, who are also crowned Canada West champions.

Coach Dave Scott-Thomas, clearly pleased with the result wandered towards his team tent, “This is familiar territory to me. This is my old stomping grounds. It is great to see the race at Beacon Hill Park again,” shared Scott-Thomas. “I remember setting up courses here and helping out.”

As for the men’s performance, he said, “It was great after finishing ninth last year at Laval. We had a young team. This year they have really matured.”

Pre-race, Gollish was getting her back adjusted by Dr. Simon Pearson, who was lifting her off the ground by her arms and snapping something mysterious in her back, back into place. “I don’t think I want to do an interview. I don’t give a f**** about cross-country,” she said in mock seriousness. Snap….snap….

Post-race, she was wet, muddy and slowly pulling a breathing strip from her nose, which is broken.

Asked if she was ready for the interview, she said, “okay, let’s do this; it’s going to be emotional though.”

Gollish ran without excuse and won handily, but it didn’t come easy.

Queen’s University’s Claire Sumner and Branna MacDougall challenged Gollish for two-thirds of the race, sharing the lead. Regan Yee of Trinity Western University sat in third while Gollish was on her tail, testing out the back, the nose and her apparent love-hate relationship with cross-country.

For the second lap, the field was beginning to spread, meanwhile, MacDougall took the lead for Sumner and Gollish moved up to sit on their tail. Yee was in fourth.

During the third lap, Yee was starting to drift a little.

The women ran in a torrential downpour, but a seasonal-to-cool, 9 degrees and no wind.

Gollish took the lead in the final lap, while Sumner and MacDougall carved out second and third position overall and Yee finished fourth.

MacDougall bristled at the notion that Gollish is at another level and said, “we competed with her today. We raced with her at OUA’s as well. She is a great runner and had a good performance today though.”

“We are really happy with the result. It is so great to finish 2-3 with my training partner,” shared Sumner, giving MacDougall a hug.

Asked if Coach Steve Boyd could be heard on the course, the girls laughed and said, “oh yeah.”

Toronto finished first with Lucia Stafford running very well as the second counter on the team, crossed the line sixth overall. Gollish recorded a 27:37. Stafford finished in 28:18, while Jazz Shukla crossed the line another minute back and 16th overall. Madeleine Kelly (23rd – 29:58) and Christiana Agustin (27th -30:10) rounded out the team results for Toronto.

Full results are available at www.racedaytiming.ca