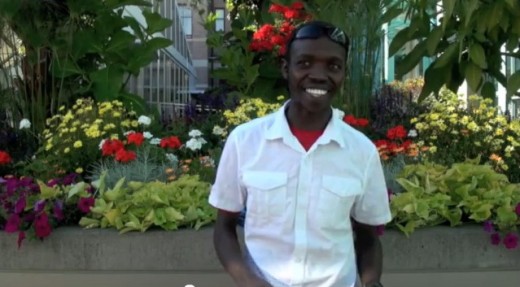 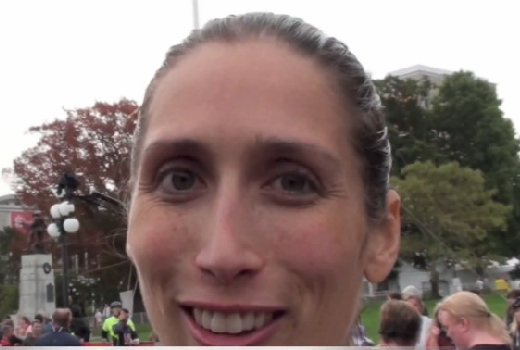 Winners of the half marathon were Willy Kimosop, who finished in exactly 66-minutes and Vancouver’s Anne-Marie Madden with a new personal best time of 76:35. Kimosop, a seven-time veteran of the event said, “Conditions were perfect. I like leading, but I didn’t have someone to push me to under 65:00, which is a time I was after, but I am happy.”

Second male finisher was fellow Kenyan Duncan Kasia in 68:24 and third was Ramiro Guillen from Goleta, California, who finished in the time of 68:32.

Madden entered the race with the goal of running under 78-minutes, she surprised herself with the win and the near two minute personal best time. Second was Victorian, Marilyn Arsenault, a master (40-plus) who set the 45-49 Canadian age-group record with the run, she also owns the 40-44 and 45-49 10,000m national age-group records. Arsenault finished in 77:04 which of course gave her the masters win as well. Arsenault owns the masters 40-plus course record at 75:39. Madden said, “I am really surprised with my time of 76-minutes, I wanted a personal best, but I wasn’t expecting to run that fast and to win, I am really happy with the result.”

Third place went to Sidney’s Lucy Smith with her finish time of 1:19:48. Smith, a 19-time Canadian champion told Athletics Illustrated, “for me it’s just fun to get out there and to race in my home town and to hear the cheering crowds. The competitive spirit still takes over mid-race and for me that is also a fun part of race.”

Half-marathon masters men category was won by local, long time runner and coach Jim Finlayson in the time of 70:04, he was followed in by Courtenay’s Neil Holm in 1:14:52 and fellow Courtenay resident Vince Brotherston in 1:15:39, who also won the 50-54 category.

The 8K race was won by former UVic Vike Geoff Martinson, who now lives in Vancouver and trains with the BC Endurance Project. Martinson crossed the line in the time of 23:38, a new personal best and the third-fastest time in the history of the race, behind Canadian Olympian Bruce Deacon and the legendary Gary Barber. Martinson was pleased with his result, having entered the race planning to break 24-minutes. When asked about his tactics he said, “yeah the plan was to go out on pace, and take advantage of the downhill finish after the turnaround, I am pretty fit right now, so I am happy with the result.”

Second place finisher was Vancouver’s Kevin Friesen who clocked-in a personal best result of 24:35; he was followed in by Calgary’s Trevor Hofbauer who crossed the line in the time of 25:10. The top male masters were Bruce Deacon who was seventh overall in the time of 25:44, “My personal bests are long behind me, but it is fun to mix it up with the young guys and perform well at my age,” said the 47-year-old Deacon. Deacon was followed in by fellow Victorian Craig Odermatt, who is a mainstay in the top results, even as a master, consistently placing well. He just finished under 26-minutes with his 25:58 performance. Third master was Odermatt’s own coach in Mark Cryderman from Campbell River. Both athletes are former UVic Vikes. Cryderman crossed the line in 27:05.

The top women were, Lindsey Carson from Whitehorse, YT, who finished in 27:15, she won by over two minutes over second place finisher Sarah McPherson, from Victoria, she finished in the time of 29:29. Long-time Xterra and World Mountain bike champion Melanie McQuaid was the first master and third overall, just nipping under the 30-minute barrier, clocking in at 29:56. “This race is an excellent tune up for the Worlds, which I will be taking in next month. It is inspiring to race events like this in a city like Victoria where so many people are fit and active,” said McQuaid.

Second master was Shawnigan Lake’s Nancy Baxendale who also won the 50-54 age-category in the time of 30:49 while Victoria’s Sarah Clark crossed the line in 31:54 and as third master.