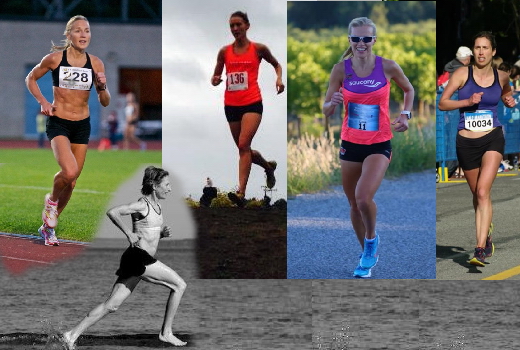 Of the three events at this Sunday’s GoodLife Fitness Victoria Marathon weekend it appears that the women’s half-marathon may be the most competitive, as the top five athletes are all within striking distance of each other. With two being local masters, the top-five seeded women in the half-marathon are Lucy Smith, Marilyn Arsenault, Anne-Marie Madden, Marianne Falk and Lisa Brooking.

Hilary Stellingwerff of Victoria won the event in her debut at the distance with her finish time of 1:16:11 last year. Stellingwerff is an international level runner who specialises in the 1500m distance. She will not be competing this year as she continues to build fitness after becoming a new mother during 2014. Vancouver’s Kimberley Doerksen who finished second to Stellingwerff is also not racing, as she will be competing in the Scotiabank Toronto Waterfront Marathon. While third-place finisher Lis Brooking of Vancouver will be toeing-the-line.

The 27-year-old crossed the line in 1:17:42 in 2013. “I’m feeling positive and optimistic that it will all come together as it did last year. I would love to run another PB in beautiful Victoria! I don’t believe it’s a fast course but feel I could run a fast half based on my training and using those positive vibes from last years’ success,” shared Brooking.

Lucy Smith of nearby Sidney continues to run very well as a master. She has a long history in the sport of running and multi-sport. She is a 19-time Canadian champion in track, cross-country, road running, ironman and duathlon. She is a two-time world championships silver medallist in the duathlon.  She will be competitive in the open category; however, it is fellow master Marilyn Arsenault who will be challenging Smith in her age-group and will likely be the closest to her on the finish line. “I am pretty fit about 1:18-ish and so I am just going to have a blast running,” said Smith.

Victoria’s Arsenault holds the GoodLife Fitness Victoria Half Marathon masters record from the 2010 event; she finished in the time of 1:15:39, while the open record is 1:14:06 by Vancouver’s Natasha Wodak. More recently, Arsenault has taken the Canadian master’s record for 10,000m, first in the 40-44 age-group, then the 45-49 category. Lately Arsenault has had the edge between her and Smith, but Smith can never be counted out. When asked about her goals, Arsenault chose her words carefully telling Athletics Illustrated, “I’m really looking forward to racing here at home again. I’ve done the work and I’m feeling fit so I plan on running hard, as always.”

Vancouver’s Anne-Marie Madden (age-group, 30-34) has a lengthy history with running and multi-sport in Canada. She started out as runner, by way of injury she moved into swimming where she developed into a nationally ranked triathlete, but is now known as much for being a competitive trail and mountain runner as she is for her ability at triathlon, road running, track and duathlon. She placed fourth in the 2013 edition of the half marathon in the time of 1:18:43.

Her personal bests suggest she will finish in tight with Brooking, Smith and Arsenault, however, is seeking an improved performance from herself, as she told Athletics Illustrated, “I’m looking forward to this weekend’s race, but am a bit unsure of what to expect. My training has become somewhat unstructured in the last few weeks. I felt strong in both the Sky Pilot 18km and Rubble Creek 24km trail races recently so I am hoping some of that fitness will translate onto the road. My goal is to run sub-1:18:00 and if everything falls into place I think I can do that.” Doing so will put her into the hunt for first place.

Meanwhile more competition may come from thirty-one-year-old Marianne Falk from Portland, Oregon, who is a bit of an unknown entity. Her best in the half marathon is very close to Madden’s at 1:18:28 and is from her performance in the 2014 Aramco Houston Half Marathon. She has run the marathon two minutes faster than Madden in 2:50:12 at the 2013 running of the Eugene Marathon event.  Like Madden her bests are recent and therefore she may still be improving. Her other pb’s are 17:32.92 for 5,000m and 10K in 36:42, while Madden has run the Vancouver Sun Run over a minute faster than that.

Sunday’s half-marathon may have five women finish within a minute of each other, which will provide excitement for the usually strong finish-line crowd of 2,000 to 3,000 spectators.