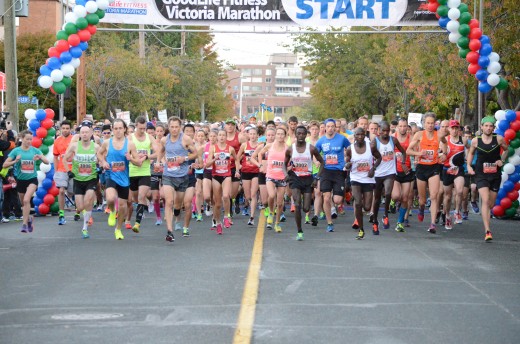 The 2015 GoodLife Fitness Victoria Marathon was run today in nearly perfect conditions, so-much-so, that Kenyan Tisia Kiplangat decided to try to break the course record of 2:13:42, which was set by countryman Lamech Mosoti during the 2013 edition. It would prove to be a monumental task with harsh repercussions.

Kiplangat began to break away from competitors early and well before he found himself running east on Oak Bay Ave or 15 kilometres into the race. He was all alone. Kiplangat passed through the half-way point on Beach Drive with the clock reading one hour and six minutes, meaning he was on pace for a record by over one and a half minutes.

By the time the turn-a-round point came on Exeter Avenue in Uplands, Kiplangat was nearly one kilometre up on his next competitor Daniel Kipkoech, who was the defending champion. Kipkoech won the race in 2014 in the time of 2:20:04. He smartly decided to let Kiplangat go.

By the time Kiplangat was back on Oak Bay Avenue he began to slow down a little; however, he had a lead that was well over three minutes and perhaps towards five minutes.

A few kilometres later, he appeared to have slowed considerably, but Kipkoech back in second place was still not visible, even with the one-and-a-half kilometre-stretch view from Clover Point to the east end of the cemetery along Dallas Road, he could not be seen.

The wheels began to fall off after the long uphill at Clover Point. As it is common to see marathon runners slow considerably during the final five and even up to 12 kilometres of a marathon, Kiplangat appeared to have the race to himself. A win seemed to be a sure thing, even if he had slowed to a 2:20:00 finish time.

After passing the corner of Dallas Road and Douglas Street at about the 39K point, there is a long downhill, then a mostly flat finish – albeit with many corners – that wind along the water and around James Bay. By the time Kiplangat got to the breakwater, just after 40K, he was walking with run breaks, he was losing time fast.

At 41K he stumbled and was looking confused. With about 800-metres to go – a distance he would normally cover in less than three minutes at this stage, he was staggering forward, stumbling and fighting to stay upright. He was still trying to run. With 400m to go, he was on his hands and knees, refusing help and crawling. With one final effort he got up to run, took a few steps and crumpled to the asphalt, to wait for a stretcher. Kipkoech went by at that point to take the win, while the record holder Mosoti, went by five minutes behind, they finished in 2:25:40 and 2:30:22, respectively.

Oliver Utting of Vancouver finished third in the time of 2:34:39 to win the masters category (40-plus).

The top three women came down to just as much drama, however, the two leaders were in a sprint to the finish, rather than a stagger. Erin Burrett of Nanaimo, BC in her first marathon and Lioudmila Kortchaguina of Toronto –  the wise veteran of marathon racing sprinted and Burrett had for all intents and purposes dropped Kortchaguina with 400m to go, to take the win. Kortchaguina was the first master and finished second overall while the third place finisher was Victoria-based ultra-marathon runner Catrin Jones. They finished in the time of 2:39:17, 2:39:37 and 2:44:29, respectively.